NEW YORK, United States — Four days shy of Cyber Monday and the sales are already mounting. “We just couldn’t wait,” Barneys New York said in an ad promoting its 40 percent off sale, which began last week. Moda Operandi, too, is offering a 50 percent off discount on Autumn/Winter 2018 collections, while other online luxury retailers including Farfetch and the Dreslyn touted “early access” sales.

Black Friday and Cyber Monday sales are slated to break yet another record this year, but factors from growing competition to luxury shoppers being conditioned to wait for sales to make purchases have pushed retailers to extend sales and promotions well beyond the traditional start to the holiday shopping season, which begins with Thanksgiving Week in the United States. Net-a-Porter, for one, offered a 40 percent-off VIP sale at the beginning of November. Even top luxury brands like Loewe and Comme des Garçons are being offered at reduced prices.

This year has seen a more even spread of discounting than in the past, according to Edited analyst Emily Bezzant. In the month of November, discounts averaged 20 percent to 4o percent off the original price in the US — higher than last year's average of 20 percent to 30 percent. Whereas 2017 reported considerably less discounting in the first quarter of the year, which then picked up as the months progressed, promotions have been much more constant throughout 2018 in both the UK and US markets, she added.

The rise in promotions by retailers can have a range of consequences. The luxury labels they carry can suffer brand erosion over time. Meanwhile, smaller labels with direct-to-consumer operations often see diminished margins because they must adjust their own pricing to avoid cannibalisation by wholesale partners.

Discounting is a double-edged sword for retailers as well: the more promotions there are, the more reluctant consumers are to pay full price. That’s not to mention the margin squeeze retailers face themselves.

“It’s a vicious cycle that we have to get out of. At the high end, luxury is supposed to be exclusive. When these products are commoditized, you’ve ruined the legitimacy of the full price,” says Bob Mitchell, the co-chief executive of the Connecticut-based luxury department store Mitchells. “It’s just not a sustainable business model.”

But many retailers have little choice but to participate in order to remain competitive. According to Kelsey Groome, managing director at retail consultancy Traub, the “mentality and psychology of the consumer” makes it difficult for the industry to break free from the sales cycle, especially over Thanksgiving.

“It used to be that if you waited for a sale, it would be either hit or miss. Colours and sizes would be missing, and some people wouldn’t risk it,” says Eree Kim, founder of the direct-to-consumer shoe brand Hopp. “But now sales are getting earlier and earlier, and everything ends up on sale. It’s hurtful because I feel like customers now wait to buy my products until they’re on sale.”

It’s a vicious cycle that we have to get out of.

Ariane Goldman, the founder of maternity fashion brand Hatch, agrees that customers are now happier than ever to wait for sales. “When we go on sale, it seems like there’s a tremendous amount of people who have been waiting for it,” she says. “But I can’t play that game because I don’t want to train the customer to always wait.”

Jennifer Zuccarini, founder of the lingerie-inspired direct-to-consumer brand Fleur du Mal, says her team has had to be extra vigilant when it comes to tracking the discounts runs by her wholesale partners. “We’d see sales as soon as our products launch, so we’re selling fewer and fewer full-price pieces,” she explains. “We have to constantly keep up with [our retailers].”

One strategy that Hatch has employed is negotiating with retailers to be excluded from its sales. “They’re not going to tell you when their sales are, so we protect ourselves by fighting to be excluded,” Goldman says. “It depends on the individual relationship with the retailer,” and sometimes the retailer will say no.

“And the flip side of it is that they won’t market us in their campaigns and we’ll lose out on those sales,” she adds, “but at least we’re not competing with ourselves.” Only about 11 percent of Hatch’s sales are wholesale, down from nearly a quarter last year. This, Goldman says, is by design.

Both Hatch and Hopp also keep most of their SKUs direct-to-consumer, which means that if a customer who discovers the brand through a retail partner is looking for another colour or style, their second destination will have to be the brand itself.

If they control their distribution channels, these “digitally native brands don’t have to discount quite as much as the big box players do,” explains Groome. “It’s a small piece of pie right now, but it is reengineering the psyche of the shopper.” Vendors could try harder to reject retailer promotions as a whole, according to Michell. “Brands themselves have to [prohibit] retailers from going on sale so early,” he says.

For retailers, which also suffer from sales as their own margins get slashed, there are alternatives to discounting, such as limited-edition products and collaborations, according to Michael Sharp, the chief executive of creative agency Standard Black. Sharp points to the successful opening of Dover Street Market LA, which created hype by securing exclusive lines from the likes of Simone Rocha and Nike.

“Everyone has been ‘dealed’ to death so it’s become part of the expectation,” he says. “But with [brick-and-mortar] retail, the key is to create something more than just a room with racks that have items for sale.”

For Hatch, whose only retail partners are Net-a-Porter and Shopbop, Goldman admits that two years ago, the brand got “sloppy” with frequent sales. But now promotions are seldom and margins are therefore more disciplined, even if topline sales suffer. And in lieu of discounting, the brand is using its two stores to host events: mommy meetups, lactation consultations, doula speakers and so on.

“Instead of fighting over price with 19 other people, we’re offering more than a product. We’re offering education, community and solutions… And that’s our competitive advantage,” Goldman says.

For Bergdorf Goodman, being more than just a room with racks meant a room with paintings. In January, the upscale department store partnered with artist Ashley Longshore on a temporary installation. The exhibit drove considerable foot traffic to the store: mostly young women familiar on Instagram with Longshore’s saturated pieces, often overlaid with millennial-friendly aphorisms such as “Jesus wants you to have a Birkin bag.” The Longshore pop-up was so successful that the store invited her to collaborate on a cafe space on its beauty level in June. 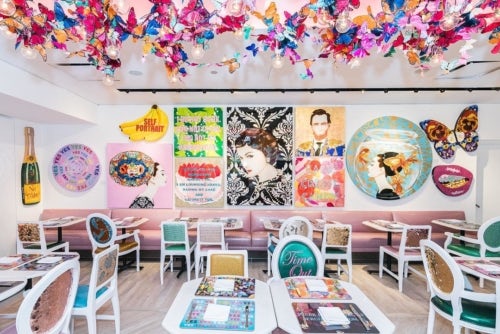 “Despite the race for Black Friday dollars, both traditional retailers and digitally native brands are trying to mitigate the promotion-oriented business with limited drops, capsule collections and low inventory, which creates demand,” she says. Meanwhile, targeted VIP and “members-only” sales can be effective.

“When you run a promotion in general, it affects margins. But a targeted, promotional strategy resonates more effectively,” Groome adds. “It’s the retailer saying, ‘We know who you are and we know what you like, we’re not bombarding you with a triage of emails that don’t fit with your purchasing behaviour.’”

Ultimately, promotions are unlikely to go away. But with the right combination of exclusive merchandise, in-store activations and a little bit of self-imposed discipline, retailers and brands can wean themselves off their damaging dependence on sales.

“There’s just so much noise right now,” says Hatch’s Goldman. But discounts are rarely the best way to stand apart from the crowd. “From a brand standpoint, we’re turning to content and community to make sure that we stand out.”

Saks Off 5th Wants in on the Discount Retail Boom