LONDON, United Kingdom — Fashion is no different from the rest of life in its binary essence. Its story evolves in pairs: Chanel and Schiaparelli, Balenciaga and Dior, Montana and Mugler, Armani and Versace, Galliano and McQueen, Philo and Ghesquière, defining their moment, inspiring their peers. Currently, we’ve got Raf Simons and Demna Gvasalia, who have sparked the conversation between street and salon that is transforming fashion. But behind them looms another pair of influencers: the true motivators.

It’s been more than ten years since Helmut Lang and Martin Margiela left their brands in the hands of others. The reasons why their influence lingers so strongly are complex, as much to do with who they were, as with what they did. They walked away at the top of their game. There are few gestures more resonant, partly because unfinished business is not the way fashion prefers things. Look at the world now and you could easily imagine some of today’s key players taking upon themselves the responsibility of wrapping up loose ends for Lang and Margiela — or at least running with the radical road map they left behind. Simons and Gvasalia, obviously. But Phoebe Philo’s time at Céline explored similar territory, and, less obvious but maybe more intriguing, you have the likes of John Galliano, now carrying the mantle at Margiela’s Maison, and Rick Owens, continuing the grand experiment.

Reflecting on the nineties, it’s hard to dodge the feeling that fashion is now a lot more ordinary.

In an era — and an industry — where there are no longer things such as secrets, Lang and Margiela remain consummate men of mystery. They weren’t opposites — like Armani and Versace for instance — but they were different enough that, at the time, people seemed to favour one or the other. Lang was always the modernist, the arch-minimalist. Margiela’s aesthetic was, by comparison, riskier, more of a magpie clutter. Lang celebrated construction, Margiela dissolved it. If Lang’s radicalism seemed to be very much of the time (1997’s “Gattaca,” the fashion movie of the millennium, was cool, sensual Helmut on celluloid), Margiela veered between discombobulated echoes of a formal past in his Edwardian silhouettes and fleeting glimpses of a synthetic future.

One thing I remember is the wholesale enthusiasm that would greet Lang’s shows, and the more guarded assessments that would follow Margiela’s, much like Miuccia Prada’s some years later, where, after a show, you could sense people waiting for a consensus to form. “Martin was never a tastemaker,” claims one contemporary, whose claim on anonymity is convincing enough for me. “There was always something uncomfortable and unflattering about his clothes. And people at the time really thought the secondhand, pre-worn thing was a bit creepy.” That is something else the passage of time inevitably allows: as the rough edges are smoothed, the burnishing of the legend can proceed without question.

In hindsight, Lang’s prescience was stunning. He was the first designer to acknowledge the impact of the internet, choosing to show his collection for Autumn/Winter 1998 online, rather than as a physical presentation. That was the same year he advertised on New York taxis, the first designer to utilise mass marketing in such a creative way. And it was in 1998 that Lang turned the fashion calendar on its head by deciding to show in New York rather than Paris, thus forcing the show schedule the industry now follows, with New York first in early September instead of last in early November. Lang didn’t play by the rules, he simply changed them to suit himself. How irresistible such a notion must be for designers now, either bound to a corporate wheel or wrestling with the tenets of independence.

If Margiela’s engagement with the cutting edge of technology was less obvious (despite what former colleagues describe as a neo-Warholian fascination with the culture of celebrity), his commitment to iconoclasm was as ardent as Lang’s. Their clothes were unyielding, tough and unsentimental. It occurs to me that, in initially setting them up as counterpoints, I’m instinctively finding connections. Like the season where they both chose the same accent colour — a bilious yellow — for their otherwise monochrome collections. But whatever wavelength they were on found more compelling expression in ideas bigger than colour palette. Chaos, for instance. In Lang’s last collections, he seemed to be embracing the fiercely unpredictable. At the time, he insisted he was also introducing a lot of organic inspirations, like stuff he found on the beach outside his home on Long Island. Nature is the mother of beautiful chaos. How often were Margiela’s collections formed in that essence of paganism, bodies daubed, crusted, swaddled? 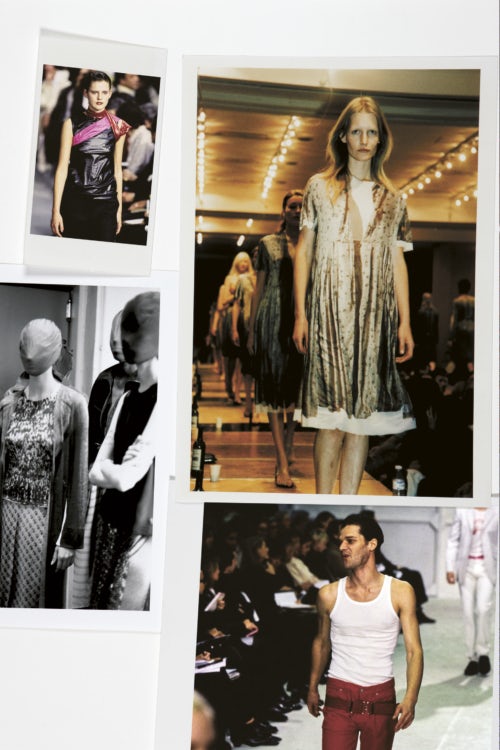 Reflecting on the 90s, it’s hard to dodge the feeling that fashion is now a lot more ordinary. Maybe it’s the ambiguous benison of streetwear. Designers themselves seem to acknowledge that, when they commit to “finding the extraordinary in the ordinary.” In their own distinct ways, Lang and Margiela made the blueprints, creating cult objects out of basics: utility wear, T-shirts, distressed denim, lingerie, latex. Margiela challenged function by exploding coats and jackets. At Balenciaga, Gvasalia launched his quest for a way to transmute the classic elegance of haute couture into the 21st century with an off-the-shoulder parka whose volume was a deliberate Margiela echo. At his own label, Vetements, he was compelled to acknowledge the influence of Margiela, the crucible in which his own aesthetic was formed by being in charge of the design team for three years, when he named his collection for Autumn/Winter 2018 “The Elephant in the Room.” The prototype for Galliano’s dissection of garments at Margiela, the skeletal technique he calls décortique, can be found in Lang’s experiments with the bare bones of clothes.

The way in which Lang and Margiela addressed the familiar — finding ways to mutate and elevate anonymity — was a natural evolution of their sense of the women and men they dressed. The current debate about diversity would have been irrelevant to them. Their runways were home to all sorts. “Both Martin and Helmut dressed real people as opposed to the generation of Montana and Mugler before them,” says Lutz Huelle, who assisted Margiela from 1994 to 1996, “so they spoke to a lot of different women, not an idealised form of one type. And I think that people miss that ‘artistic’ view of seeing the world as opposed to a uniquely mercantile one.”

It wasn’t only “artistic.” What stands out for me now is the precise psychology of Lang and Margiela’s clothing. They knew what their customers needed. The notion of protection has been a stated trend in recent fashion, entirely explicable in light of a world going gaga. But protection has always been fundamental in clothing. It’s striking how armoured Lang and Margiela’s clothes often seemed, how they provided an inbuilt sense of security. Fashion always reflects — “the glass of fashion” Cecil Beaton called it — but the best fashion projects. Anticipates. Like Lang. Like Margiela. Post-Internet, there’s an irresistible purity and integrity to what they achieved.

Helmut Lang called his shows “séances de travail.” There, the literal meaning of the word séance is a session or a sitting. It was not just about the work, it was equally the showing of the work that mattered to him. Sometime after the fact of his last presentation, for Spring/Summer 2005, he told me, “I didn’t want it to be always starting somewhere and then ending and the next thing being completely different, because that didn’t make sense to me.” Margiela was similarly preoccupied. His work diverted fashion away from the circus it became in the 90s — the delirious roundelay of change — to re-focus attention on his consistent core principles: body and fabric.

But we could choose to use the word séance as it is understood more generally in English, as a communion with something spiritual, intangible. Lang and Margiela saw creativity as a forceful, continuous flow. Evolution, not revolution. It’s telling that both designers removed themselves from the industry while they were still comparatively young. “This isn’t for me” is a powerful statement. We know that Lang has since lived his life quietly as an artist, according to the precepts that shaped his time in fashion. Margiela remains as enigmatic as ever. His current retrospective at the Palais Galliera is impressive but it appropriately, provokingly, asks more questions than it answers. So, it’s in the work of the acolytes that we’ve seen the seeds they sowed sprout contemporary forms: Simons at Calvin Klein, Gvasalia at Balenciaga, Galliano in his stewardship of Margiela’s Maison, season on season exploring defiant pet themes like “dressing in haste” and “unconscious glamour.”

Like the tendrils of triffids, Lang and Margiela infect new generations. The most inspiring, encouraging thing, however, is that their truly transformative impact has yet to be felt. As the future tries and fails to define them, they will continue to warp fashion in their own supremely logical, totally inexplicable way. In light of the fact that I’ve never actually laid eyes on Martin Margiela, let alone spoken to him, it has to be Helmut Lang who has the last word. I asked him once about the gap between ideal and reality, the chasm where all dreams die. He was characteristically unshakeable. “I’m not made for that negative concept. Even when times are not favourable, there’s a good possibility to do something or to start something. I think if I am interested in something, I’ve never been so disappointed by it that I was irritated.” Children of the future, heed those words.