LONDON, United Kingdom — Gucci and Balenciaga dominated the fashion conversation in 2017, both amongst consumers and industry insiders. But which of the two Kering-owned fashion houses generated the most heat overall?

After analysing data from over 70 million consumers, BoF can reveal that while Balenciaga scored big in the second half of 2017, Gucci triumphed overall, taking the top spot in the Lyst Index “Hottest Brand” ranking for 2017. In fact, more people entered the search term “Gucci” on Lyst over the course of the year than they did the generic terms “shoes” and “dresses.” Led by the power duo of creative director Alessandro Michele and chief executive Marco Bizzarri, the Italian behemoth consistently ranked in the top three brands every quarter of the year.

But Balenciaga’s performance was still impressive. Search traffic to the brand helmed by designer Demna Gvasalia grew by 50 percent year over year, earning it the top place on Lyst’s “Hottest Brand” Index in the third and fourth quarters. But it wasn’t enough to outpace Gucci overall.

So, what’s the secret to their success?

Much of the conversation regarding the success of Gucci and Balenciaga has focused on the talents of their creative directors, Alessandro Michele and Demna Gvasalia, respectively. Each has taken the strategy of using a strong and clearly identifiable design language that evolves gradually from season to season, instead of reinventing things and starting from scratch, thereby training consumers to know what to expect from the brand while still mixing things up enough to keep them interested. 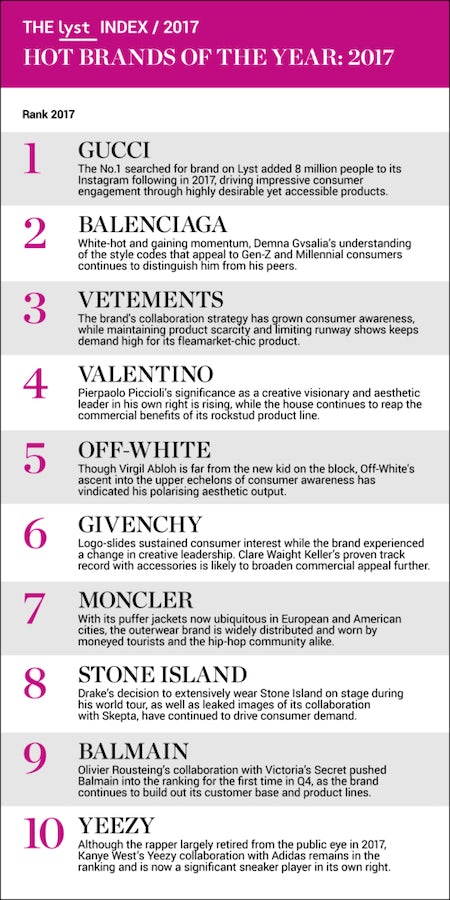 However, Michele and Gvasalia are only half the story. Both Balenciaga and Gucci also boast top merchandisers in their senior leadership. Jacopo Venturini joined Gucci in 2015 from Valentino where he held the role of ready-to-wear collection director and retail image coordinator. Similarly, before his appointment as chief executive of Balenciaga in 2016, Cedric Charbit worked under Francesca Bellettini at Saint Laurent — first as product strategy director and later as executive vice-president of product and marketing — helping drive the house’s sales past the billion-dollar threshold for the first time in 2015.

By closely linking the design and merchandising functions, the commercial products available from Gucci and Balenciaga are not just an afterthought that comes at the end of the design process, but rather a natural outcome of the collaboration that comes between a designer and a switched-on product team that knows how to commercialise his ideas. This ability to take brand heat and translate it into sales is reflected in the Lyst data for top-selling products in 2017. Together these two brands account for the top five selling products in 2017, with four products by Gucci, the label’s “bloom slides,” logoed belt and T-shirt and its “Ace” sneakers, and Balenciaga’s Speed Boot, which landed in second place overall.

In 2017, Gucci was the number-one searched-for brand on Lyst and Google globally, according to analytics released by both companies. What’s more, the brand added 8 million Instagram followers in 2017.

To build a variety of takes on its core aesthetic, Gucci has also successfully cultivated relationships with creatives such as Coco Capitan, Petra Collins and Helen Downie, better known by her Instagram handle Unskilled Worker, adding idiosyncratic nuances to its brand codes and communications. The brand also appointed a group of millennial advisors, aged below 30 and described as “a committee” by chief executive Marco Bizzarri — allowing it to tap the perspective of digital natives in its product and communication strategies.

However, it is how naturally Michele’s maximalist aesthetic lends itself to Instagram and other digital photo-sharing apps that gives Gucci its competitive advantage. He has the highest engagement rate of any designer on the app, according to Tribe Dynamics, with his posts receiving proportionally more comments and likes than any other. The Roman designer’s rich, renaissance-inflected aesthetic is “Made for Instagram.” 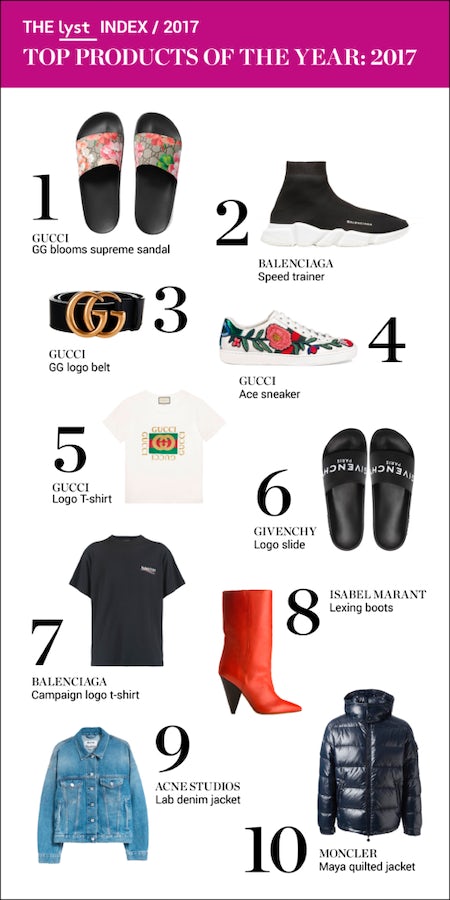 That same aesthetic fuels Gucci’s high online engagement rates. The brand achieves strong organic traction on social media channels — with products like its Princetown slippers driving a 160 percent year-over-year increase in earned media value according to Tribe Dynamics. Scrolling consumers with ever-shorter attention spans respond to the richness of Gucci translated online, giving it the highest rate of growth of any luxury brand.

But what makes Gucci’s strategy so successful commercially is the combination of its massive digital reach combined with comparatively affordable prices, enabling consumers to buy into key products. Keeping prices accessible means Gucci can reach cohorts of consumers typically unable to afford luxury products, giving it the first, third, fourth and fifth best-selling products in the ranking — all under $500, with some less than half of that price.

Though Gucci beat Balenciaga by a considerable margin in both rankings, Demna Gvasalaia’s influence on the Hottest Brand ranking is still impressive, with Balenciaga and Vetements ranking second and third respectively.

The Demna-effect was felt throughout 2017 thanks to the widespread adoption of Gvasalia’s engorged silhouettes and couture sensibility towards streetwear. However, his authentic connection with luxury’s youngest consumers distinguishes his output from those that emulate his work.

According to the company, 65 percent of Balenciaga’s consumers are Millennials and they are responsible for 50 percent of total sales. Balenciaga was the sixth most buzzed-about brand on Instagram (measured through comments) according to the content sharing application, even though it is not one of the top 10 most followed brands, nor is Gvasalia one the top 10 most followed designers.

“The younger generation is looking for something that stands out and makes them special rather than necessarily an amazing finish that you would find with some traditional brands,” Balenciaga’s Charbit told The Financial Times earlier this year. And Gvasalia’s idiosyncratic vision has driven impressive search traffic, growing 50 percent in volume year over year, while placing two products in the Top 10 selling products of 2017: the Speed Boot and a logo tee. 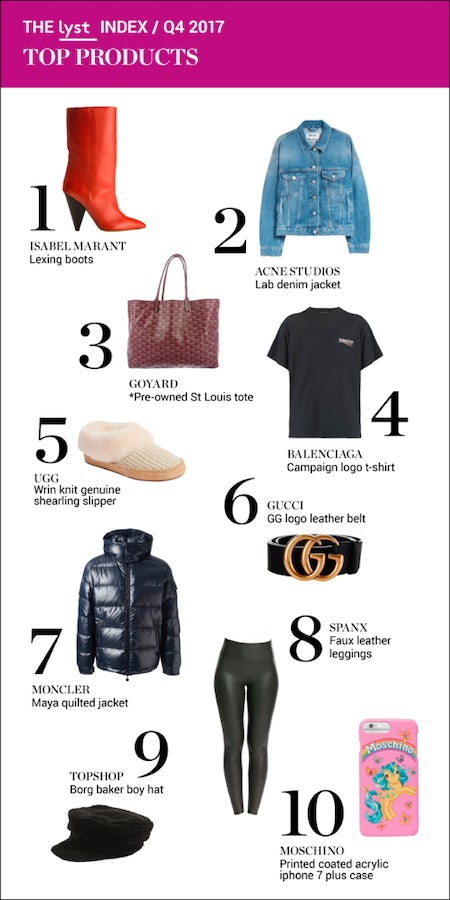 Consumers also typically engage with product images far more than campaigns and celebrity imagery on social media. With 77,000 “likes,” the product shot of the Balenciaga Speed Boot, which sold out on numerous e-commerce sites on the first day of its release and was the number one selling product in Q3, has 10 times the engagement of its runway and campaign imagery.

Though Balenciaga will likely grow at an even faster rate this year, Gucci’s pre-eminence in the Lyst Index is likely to continue in 2018. But while Alessandro Michele’s consistency has worked in Gucci’s favour to date, the house has already mined similar reference points for 12 collections. How long can it be sustained? The pendulum of consumer taste always swings.

Michele and Bizzarri will need to continue to find innovative methods to maintain a sense of newness and discovery at Gucci. Search traffic for the brand had already declined by 10 percent in H2 before the holiday season sales uptick. As Hedi Slimane and Kim Jones begin new chapters this year, competition will also be fiercer.

Balenciaga is not as shackled to one particular vein of aesthetic expression, and benefits from Cristobal’s rich legacy. Interestingly however, as Gvasalia’s vision drives the Parisian house, the impact of Vetements on consumers seems to be flattening. Unless the brand’s well-received collection shown during Paris Menswear Week in January 2018 reengages consumers, a slight downward trend in search traffic to the brand may mean it exits the Top 3 brands in Q1.

BoF partnered with Lyst, the global fashion search platform, to analyse the behaviour of over 70 million annual consumers, shopping across the world’s largest inventory of luxury and contemporary fashion. The rankings were formulated using Google and Lyst search data, engagement statistics, conversion rates and sales. Look out for the fourth iteration of the Lyst Index at the end of Q1. Due to exclusive vertical distribution models, the Lyst Index does not include: Chanel, Christian Dior, Hermès, Louis Vuitton, Céline and Prada.