Shayne Oliver’s Hood by Air has unleashed one of the most compelling new looks in fashion. But the aesthetic — not Oliver’s alone — is the result of an alliance of image-savvy collaborators.

Shayne Oliver’s Hood by Air has unleashed one of the most compelling new looks in fashion. But the aesthetic — not Oliver’s alone — is the result of an alliance of image-savvy collaborators.

NEW YORK, United States — In today’s world of instant media consumption and rapid-fire retail deliveries, fashion has become less about clothes-making and more about image-making. But defining and communicating a strong image isn’t the job of a designer alone. For one thing, more and more fashion labels are hiring image directors with titles like ‘head of image’ (JW Anderson) and ‘chief image officer’ (DKNY).

Over the past few years, designer Shayne Oliver’s New York-based luxury streetwear label Hood by Air has unleashed one of the most compelling new looks in fashion: an unruly collision of club kid, gender play, pan-racial, artsy, hip-hop and high-fashion sensibilities. But the look ― not Oliver’s alone ― is the result of a configuration of behind-the-scenes creatives who inhabit the arty-meets-grungy New York club scene.

Today, Hood By Air is a CFDA award-winning label. In 2014, the brand was a finalist for the inaugural LVMH Prize. But Hood By Air’s first few years, largely focused on oversized t-shirts borrowed from skate culture, were shaky and cash strapped. It was during these early years, however, when Oliver worked as a DJ — along with Venus X — playing New York’s underground GHE20G0TH1K parties where he made friends and forged alliances with a cast of creatives who eventually became not only muses for Hood By Air, but early supporters and, in some cases, long-term collaborators. 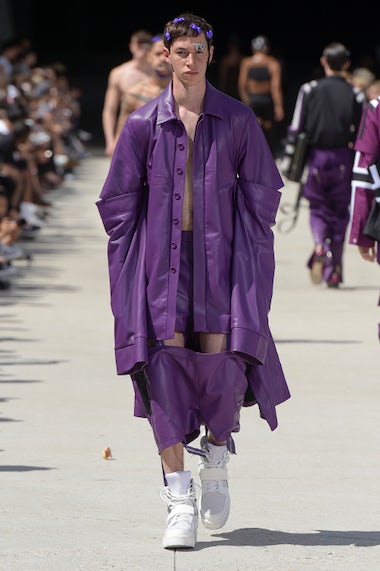 Many entrepreneurs advise against working with friends. But in Hood By Air’s case, friends of Oliver have become the very lifeblood of the brand. “I would never want to work in an environment [unlike the one] I have now,” says Oliver of the “community” he was able to assemble. Even, today, these key players, marked by their cool personal style and eccentric, hyper-creative lifestyles collectively inform the brand’s brash look.

Ian Isiah, Hood By Air’s international brand ambassador, is an RnB singer with long plaits of blonde hair, who fiercely battled Oliver over who had the more fashionable looks when the two were younger. Akeem Smith, the brand’s stylist, is a prodigy of sorts, who at only 23 (he started styling at 16 years old) also consults for Kanye West’s Yeezy and works with Kim Kardashian. While his work can also be seen in V Man, 032c and Dis, Smith’s personal Tumblr, according to Oliver, has the collection of images that best represent Hood By Air’s visual aesthetic. Then, there’s Leilah Weinraub, the company’s chief executive, an articulate bespectacled filmmaker and an Antioch alumnus with a strong gender-neutral sense of style. Paul Cupo, Hood By Air’s fashion director, is a School of Visual Arts graduate who, along with the legendary Zaldy, has created costumes for Lady Gaga and Michael Jackson. And lastly, there’s Zachary Ching, the brand’s commercial director, who was instrumental in the growth of VFiles and now ensures the Hood By Air aesthetic is consistently translated at retail.

Unlike many brands whose “image” is the work of seasoned professionals, Hood By Air’s aesthetic is highly personal and authentic. Ideas and concepts “come to us by talking to each other and asking what matters to us most at that particular time,” explains Oliver. The aim is to “break new fashion ground with a sledgehammer,” adds Smith, whose directional styling includes experimental elements like dentures and stockings worn to distort the faces of models.

Although Oliver and Weinraub are the twin heads of the business, Hood By Air has a populist, fluid decision-making approach where everybody’s voice is heard. “We just have a different way of working. No one is really supposed to have a crazy ego or flex their power,” says Weinraub on the company’s flat organisational structure. “It’s not about ruling by force, it’s about good ideas.” The crew’s organic brainstorming process usually involves lots of screenshots from Instagram, Tumblr and even Grindr, pinged back and forth over text messages with each other. The best of them find their way onto Hood By Air’s moodboard in their Hester Street office in New York’s Chinatown. 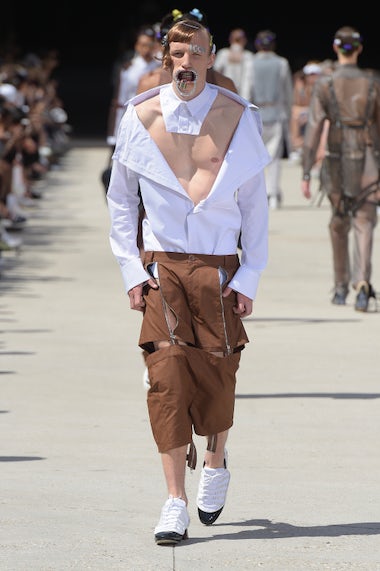 “Then, we build the character around those concepts by using people that can carry it off for us,” says Oliver. “We push versions of ourselves unto them.” Although Isiah has now taken on casting duties, it was the reportage-style photography and street-casting by Kevin Amato for 8 years with Oliver that went a long way towards defining Hood By Air’s look, as well as a seminal slice of New York’s urban culture. Some of Amato’s subjects were “street kids” from the Bronx, where he is based. Others were unconventional characters like Boychild, the androgynous performance artist, rapper A$AP Rocky and voguers straight out of New York’s ball culture. Although Amato recently ended his working relationship with Hood By Air to pursue other projects, he remains grateful. “My work with Shayne gave me a platform to showcase my work, which is rooted in some form of activism to create awareness for the under-represented minority,” reflects Amato.

In order to translate the brand’s ethos into saleable product, Hood By Air balances conceptual, high fashion looks with sportswear pieces that have a similar kind of market currency as pieces by skate-culture label Supreme. “People really wanted us to keep competing in the t-shirt, streetwear world,” says Cupo, who is a technically trained designer and works closely with Oliver on the collections. But to create the blend that sets the brand apart, “I really refined the collection and wanted to create beautiful, editorial and runway pieces.”

While Cupo’s work on these more theatrical looks has given Hood By Air real fashion credibility, Ching, who played a critical role in the development of the brand’s accessibly priced, top-selling Classics line, ensures the collection is appropriately merchandised to reinforce the brand’s image. "We look at every single order and if it doesn't look great, we’ll have a conversation within ourselves and then our store,” explains Ching. "We are very vocal about representation because we really care about that."

The brand works hard on “triggering emotions, so there’s a certain swag or demeanor that comes with every piece of clothing from Hood By Air,” explains Isiah. “We’re still blown away when it hits stores, because that exact person that we tried to cast is the person that’s buying these pieces.”

This may be true, but Isiah is underestimating the power of Hood By Air’s reach. While the brand declined to reveal business metrics, according to Ching, consumers well outside of the expected Hood By Air demographic, from 14-year-old boys in the Midwest to Korean teenagers and even the designer Vera Wang, are all customers who want that “swag.”