LONDON, United Kingdom — Tucked away in the corner of Erdem Moralioglu’s dove grey office, housed in the designer’s slick new headquarters, still scented with the tang of fresh paint, the Duchess of Windsor hovers with a furrowed brow. This is the American socialite, later turned aristocrat, who threatened to bring down the British monarchy with her svelte figure and innate sense of style — all electric Schiaparelli and bold Cartier jewels — and who famously quipped that one could “never be too rich or too thin.” It’s easy to imagine her wearing the designer’s namesake label, Erdem, with its ornate embellishment, deeply coloured prints and decadent textiles. Moralioglu, a self-confessed classicist known for the rich narratives behind his collections, bought the portrait at an auction last month, and it couldn’t be more indicative of the space he has carved out as a go-to for old-world elegance in a market that is increasingly crowded with an athletic, hyper-branded aesthetic.

“I guess I've always had a distorted view of what casual is,” laughs the designer, who is reticent about his forthcoming collection during our interview just days before his London Fashion Week show. “I think we live in a strange time and the idea of people wanting things that feel special is more important than ever.” 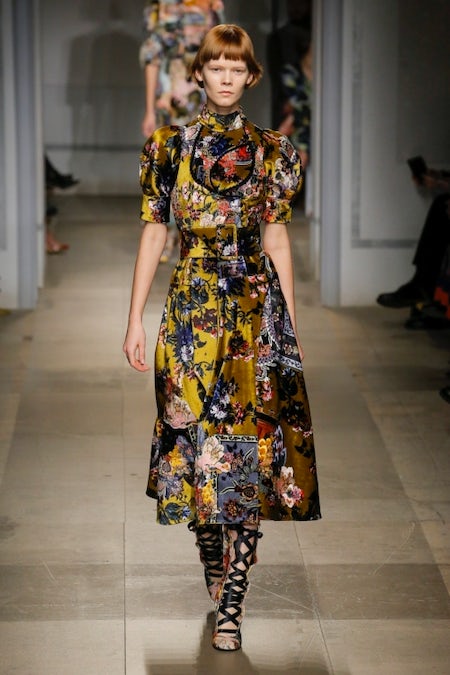 Moralioglu is part of a generation of London-based designers who broke onto the scene just over a decade ago and were heralded as the saviours of the British fashion industry at a time of recession and renaissance. Roksanda Ilincic, Christopher Kane, Jonathan Saunders and Jonathan Anderson are his peers, but Moralioglu is the only one to remain independent. Without external investment, his business has grown 19 percent in the last year and generates about $12.9 million in sales revenue, according to documents filed with Companies House in the UK.

Most of this growth comes from the US, where the designer has important wholesale partnerships with key retailers like Barneys New York and Saks Fifth Avenue. Later, this month, Erdem will open a shop-in-shop at Saks’ New York flagship. But growing the label’s direct-to-consumer channels, which currently account for about 10 percent of the business, is a priority for Moralioglu. “Retail is something that is very important to me and I'm interested in expanding that,” he says. “America is one of my biggest markets, so I feel like the next logical step is a store in New York.”

“The main thing that is driving that growth is growth in wholesale, but also growth in retail,” he continues. “Retail continues to become stronger and stronger.” The designer says that this past August has been the strongest month at the London store since it opened. “Granted, the store is only two years old, but it’s a strange month to have such high sales because historically August is difficult as everyone is away.”

The business re-launched its e-commerce site, Erdem.com, last month. “There were aspects of it that worked really well, and there were aspects of it that felt that they could be improved, like speed and legibility and making it more in line with the store, which were all big learning curves,” says Moralioglu. “It’s still something we’re growing — and growing the team that runs it.”

I think we live in a strange time and the idea of people wanting things that feel special is more important than ever.

Back at the store, which has marble flooring, emerald velvet sofas and a sweeping spiral staircase, one won’t find shelves of bags, which may come as a surprise. Why most of his peers have set their sights on the lucrative designer handbag business, Moralioglu has kept his emphasis on his dresses. “Bags is something I haven’t approached yet and something that I eventually will,” he says. “But I don’t feel like I'm quite ready for that world yet; I think we also live in a funny time where that world of the bag is changing and evolving.” Instead, he says he’s focusing on shoes. There are also categories within ready-to-wear that the designer is keen to expand upon, such as separates and knitwear. “I feel like there is so much breadth within the collection itself that I want to grow and fine tune.” 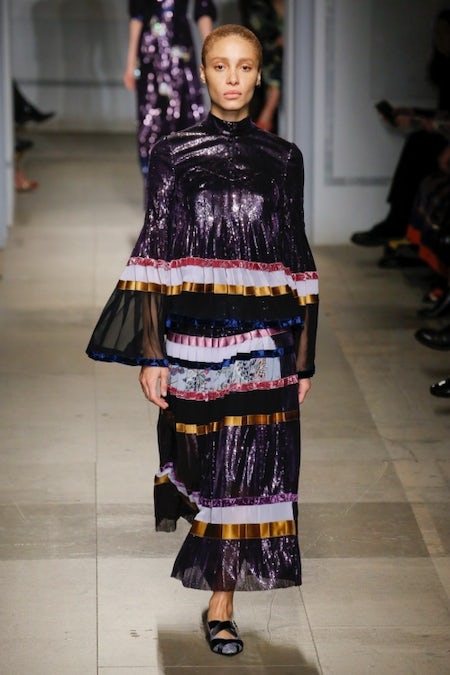 “Walking around Barneys New York, you will seldom find bold prints [and] then there is Erdem,” says Leah Kim, executive vice president and general merchandising manager of womenswear at the retailer. “He has established himself as a designer who has mastered prints, and continues to create beautiful silhouettes for all women. His evolution over the last decade is truly impressive, but personally, I am most excited to see the more ‘sexy’ elements in his recent collections.” Kim says that the size of the buy grows each season and that Moralioglu's printed jersey dresses are consistently popular, but his gowns and tops are also always on the store’s bestseller list.

At Net-a-Porter, buying director Elizabeth von der Goltz also points to Moralioglu's sense of colour and print — and increasingly texture. “Over time, he has evolved to use richer more luxurious fabrics so his collection now has much more texture,” says von der Goltz. “We not only see floral chiffons and jerseys but also embroideries and exquisite jacquard and brocades.” She says his other categories have been steadily growing. “He also has moved into creating more separates: hero blouses, tops, jackets and knitwear, in addition to dresses, which he is so well known for.”

Now, Erdem is set to benefit from a major boost in brand awareness courtesy of “cheap and chic” Swedish fast fashion giant H&M, for whom Moralioglu has designed a capsule collection that launches in November and will be heavily marketed around the world. If a video teaser directed by Baz Luhrmann is anything to go by, the capsule will mimic the glamorous formality of Moralioglu's own line. The designer says he pushed H&M to use real Harris tweed and Italian mills. “I certainly pushed them as far as possible,” he says. “What I was so interested in exploring with that collaboration was almost doing the opposite of what you would expect from the high street.” The collection will focus on wardrobe staples, the kind of clothes, he says, that could be worn for years. It will also include menswear, which Moralioglu designed for the first time. “It was interesting to see how the men's collection influenced the women’s collection,” he says. “I found myself taking things off our male fit model and putting them on the female fit model, and vice versa.”

Backstage at his fashion week shows, Moralioglu often debriefs journalists against a tapestry of cinematic images that make up his mood board. There are stories of 1930s spies arriving in Deauville, 17th century ladies-in-waiting sailing across the seas, or decadent Ottoman harems of mysterious women. What guides his latest collection, to be unveiled today at London Fashion Week, remains a mystery. But come November, a whole legion of new fans could be paying attention.

Erdem, A Family Tree in Fabric