The Rise of the Fashion Sweatshirt

The humble sweatshirt has been reborn as a high fashion statement piece for both men and women, striking a chord with consumers and offering fashion businesses unmistakable commercial opportunities. BoF investigates.

NEW YORK, United States — Once reserved for the gym and lazy weekends, the humble sweatshirt has emerged as a high fashion hero piece for both men and women, regularly appearing on top tier runways and consistently selling out at luxury retailers.

The rise of the statement sweatshirt has rendered fashion icons out of Nicolas Ghesquière’s “Sci-Fi” jumpers for Balenciaga and Riccardo Tisci’s panther and Rottweiler jumpers at Givenchy, which cost north of $1000. 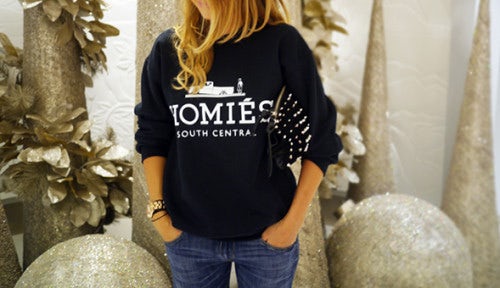 At the other end of the spectrum, it’s also given rise to the popular and cheeky sweatshirts by Brian Lichtenberg and SSUR, printed with fashion wordplays like “Homiès” (Hermès), “Féline” (Céline) and “Comme des Fuckdown” (Comme des Garçons), which hover around $120.

Tomoko Ogura, senior fashion director at Barneys New York, cites Givenchy and Kenzo as early drivers of the fashion sweatshirt trend. “Givenchy's panther sweatshirt from Fall 2011 is the one that resonates most,” Ogura told BoF. “[Since then], we’ve seen the sweatshirt trend evolve. The offering has become wider and we see the sweatshirt styled in more luxurious renditions,” she added. “Fabrications have evolved past typical jersey to jacquard, leather or fur. Designers are infusing details like quilting, zippers, embroidered symbols, peplums and embellishment to help elevate the look of a style that is known to be quite casual.”

Decoration is key to their success, said Harvey Nichols fashion director Paula Reed. “The [appeal] has got to be in the artwork — I think people are really trying to buy something with an element of originality in it. It’s not just the question of having a sweatshirt, people are expecting that artisanal quality — the embellished elements, the embroidered elements, the beaded elements, the decorative elements. Like sports couture.”

For designers, the business advantages of sweatshirt trend are clear. “Given that the fabrications are largely available in bulk and production is simple, there is a definite commercial opportunity,” said Sam Lobban, buyer for Mr Porter. Indeed, the ratio between cost of production and retail price is highly favourable. And in the capable hands of merchandising teams, which are, in many cases, a new addition to many European fashion brands, fashion sweatshirts are a potent way to translate runway themes into more widely salable goods.

Reed admitted to wondering “if people are going to get tired” of the fashion sweatshirt. “You see them all, front row, with even more extreme prints. People have done almost everything they possibly can on a sweatshirt.” But for the moment, consumer enthusiasm shows no sign of waning. “Girls are buying into it as well as the guys,” she confirmed. “We can’t keep them in store, we don’t have any on markdown. They sell out. And they have been for the last couple of seasons.”

“The trend has certainly shown no signs of slowing down,” echoed Lobban. 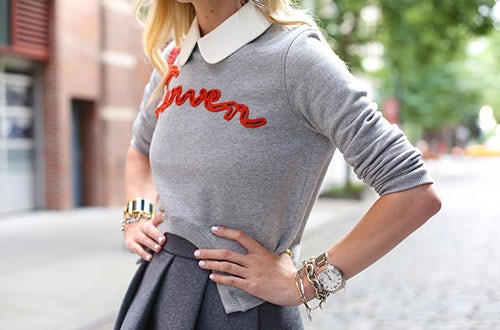 “We had some delivered for pre-Autumn/Winter and within three days, they were already gone, including Givenchy,” said Damien Paul, head of menswear buying at Matches Fashion. The fact that fashion sweatshirts are "selling out within days" is a new phenomenon in menswear, he added. "With womenswear, you get the right bag and it sells out straight away. But we've never had that intense a reaction from the customer in menswear before."

Endlessly popular with style influencers, the fashion sweatshirt has also become a new entry-level luxury item. “For an aspirational customer, it’s an accessible way to buy into a brand,” said Ogura. “The sweatshirt often incorporates a particular print or motif of the season in an easy and fun way... It opens the door to a new group of customers for designers.”

The appeal for consumers lies in “how easy to wear [sweatshirts] are, mixed with how good they look. To some extent they’ve become an alternative to the fine knit sweater; there’s the obvious streetwear pickup, but also they look great over a shirt and under a sports jacket,” said Lobban. Adds Ogura: “It can be a modern way of dressing — feeling comfortable and still looking pulled together.”

What’s more, “the cost per wear works out really effectively," said Paul. "If you can wear a sweatshirt to work and look appropriate, and then wear it straight out to a party afterwards, that makes it quite a valid addition to your wardrobe."

So are buyers continuing to bet on the fashion sweatshirt?

Or, as Paul puts it: "It's not just a trend, it's actually now a wardrobe staple."