LONDON, United Kingdom — Dazed & Confused is 25 years old, which makes it roughly the same age as many of its employees. In its infancy, few would have imagined the influence that the independent style title would have on the fashion landscape. But over the years, it has also proven to be a fertile training ground — almost a school — for generations of fashion creatives, who now form a network of “alumni” making waves across the industry as stylists, editors, art directors and more. “You call it a network and I call it a family,” says Jefferson Hack, the co-founder and editorial director of Dazed Media.

There are the original graduates, such as stylists Katie Grand, who is the founder of Condé Nast bi-annual Love and works closely with Miuccia Prada and Marc Jacobs; Katy England, who worked with the late Alexander McQueen; Alister Mackie, who has been key to the success of the menswear lines at Lanvin and Louis Vuitton; and Charlotte Stockdale, who now works closely with Karl Lagerfeld at Fendi. Then, there’s Nicola Formichetti, once Dazed’s creative director, who later became Lady Gaga’s stylist, creative head of Mugler and then artistic director of Diesel. More recent “graduates” include Karen Langley, Katie Shillingford and Robbie Spencer, who has worked with designers such as Craig Green and Simone Rocha. 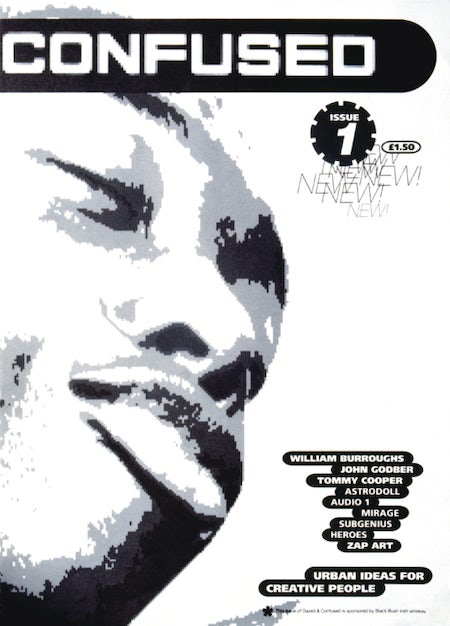 Founded by Jefferson Hack and photographer Rankin in 1991, Dazed Media, as it is now known, has certainly grown over the years. But its organisational structure and working culture may surprise traditionalists. Importantly, young staffers are given lofty titles and immense responsibility, stemming from the magazine’s DIY origins and makeshift sensibility.

“When I started work at Dazed I was still at college so I literally knew nothing about how to get a magazine together,” recalls Grand, who was Hack and Rankin’s first collaborator. “I suppose because I was a bit younger than Rankin, so I always presumed he knew what he was doing; it's only now I know everyone that worked there was completely naïve and doing it for the first time.”

Whereas i-D and The Face, the two other prominent London style titles, were started by established industry figures (prior to i-D, Terry Jones was art director at British Vogue; Nick Logan edited NME and set up Smash Hits before launching The Face), Dazed was launched by Hack and Rankin, supported by Grand, while they were all still students. “We were just kids who came out of college and we didn’t know anyone,” says Hack. “There was an anti-professionalism to it and we were just making it up as we go along.” According to Grand, “because the team was so young we had that youthful brattiness where you always think you're right even when you're far from it. We were all pretty equal as we had all decided to not graduate from art school to do Dazed.”

The emphasis on giving young people responsibility is still vital to the ethos of the magazine. “We need to keep the decision makers young; the creative director, editor-in-chief and fashion director especially; otherwise it won’t reflect its audience’s value,” adds Hack. “The boundaries of these borders between the establishment and the gatekeepers of culture and the fans and audience are completely smashed,” he explains. “For me being able to promote Isabella Burley, who was 24 when she became editor-in-chief wasn’t risk taking — it was just logical.”

“It was and still is my education,” says Isabella Burley, who didn’t attend university. “I don’t really think it could’ve happened at another publishing company because I don’t think there are many places that really push, trust and offer opportunities to a younger generation in the way Jefferson does.” As well as overseeing a re-design of the magazine and its transition to a bi-monthly, Burley is also the newly installed editor-in-residence of Helmut Lang, where she acts as a kind of curator, appointing young design stars and other “artists in residence” to reinterpret the label. The first and most recent was Hood By Air designer Shayne Oliver, whose reimagining of the brand was one of most buzzed-about shows of New York Fashion Week.

“Dazed has been a school for me and for a lot of people. It’s a place where so many amazing people started their careers.”

Susanna Lau, now far better known for her Style Bubble blog than her tenure as Dazed Digital’s commissioning editor from 2008 to 2010, says she owes Dazed a “tremendous amount” and concurs that Hack’s talent is in mentoring and nourishing young talent: “He knows people will grow and move on, but you will always remember that Dazed was where you cut your industry teeth and that you will always be a part of that family.” 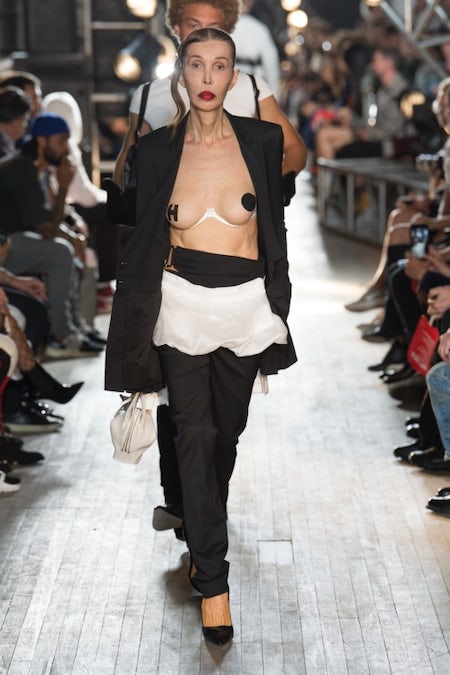 Formichetti was hired as a fashion editor at Dazed in 2005 after working in The Pineal Eye, the Soho shop known for its avant-garde pieces, including inflatable penis headpieces. He began with a one-page column called “Eye Spy” in 2000 which soon turned into six pages, and a full-time role. “Sometimes when you’re an assistant, a stylist or an editor just wants you to do the job, so you’re directed and told what to do. Dazed wasn’t like that. It was very freestyle,” he says.

Dazed is also notable for the freedom it gives its staff to take on extracurricular projects and consulting work — like Burley’s role at Helmut Lang — which some say softens the blow of low salaries. “The most important thing out of all of this is that when we started Dazed and to this day, I don’t want our editors to be desk bound or studio bound; I don’t want them to exist within a white wall,” reasons Hack. “If they’re DJ-ing in the industry or working on a look book for a young designer, if they’re a part of the culture, it makes their ability to reference and reflect their culture more authentic.”

Robbie Spencer, who joined Dazed as an intern when he was a student and is now the title’s creative director, simultaneously consults and styles brands including Simone Rocha, Craig Green, Ann Demeulemeester, MM6 Maison Margiela and Philip Lim. “My training at Dazed has really influenced my work outside of the magazine,” he says. “I have always had the freedom to do what I want to outside of my role at Dazed.” One of Dazed's strengths, according to Spencer, is that when hiring, Hack often looks to promote from within the company. “Dazed has been a school for me and for a lot of people,” he says. “It’s a place where so many amazing people started their careers.”

“Getting people when they’re full of energy and passion has a huge strength,” says Katie Shillingford, who now works with Gareth Pugh and is the fashion director of AnOther, something of a big sister title that’s owned by Dazed Media. Shillingford began by assisting Nicola Formichetti and, within a month, was asked by Cathy Edwards [then fashion director of Dazed] for her input. “I think because it’s an independent company and we don’t have pots of gold at our disposal everyone has always mucked in and you work out another way of achieving big ideas,” she adds. As for the trust in youth, she uses the analogy of a firework. “It’s a bit of a risk, but if it goes well you get a great result.”

In some ways, AnOther, which launched in 2001, became a kind of post-graduate programme for alumni like England, Edwards and Mackie, meaning the original Dazed could bring in a fresh wave of creatives, keeping its tone and outlook in line with youth culture and its young readership. “You just can’t have a magazine for a young audience staffed at the top by creatives who are not in touch with that audience anymore,” says Hack.

It was and still is my education.

When Dazed moved to an office a stone’s throw from Old Street, it chimed with the rise of East London as a melting pot for youth culture and creativity, courtesy of cheap rent and buzzing nightlife. Dazed remained in the now-bulldozed space until earlier this year when it moved to 180 The Strand. “It felt like East London was a place where things were about to happen,” says Alister Mackie, who joined Dazed as an assistant to Katy England in 1996. “People were coming in doing parties and clubs, making art, designing clothes, working and living in these disused spaces. Young people [were] reclaiming this forgotten part of London, so the energy was kind of a lawless wild west spirit.”

In those halcyon days, the week would almost always end with a party and the evenings at the office could easily stretch into mornings. “Social life and work life all felt like one thing,” recalls Mackie. “No one was inhibited by any precedent of how a magazine should be done, or how a fashion shoot should look, and there was a lot of stuff happening right on our doorstep.” 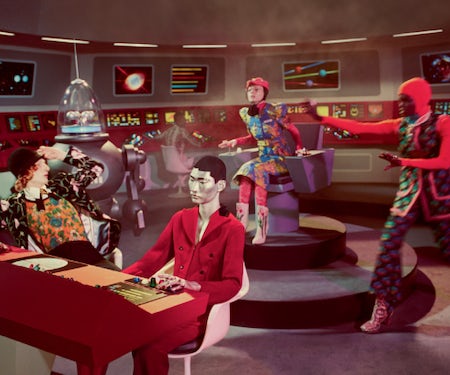 “It was a hell of a lot of fun, but had an intensity that was unsustainable,” admits Grand. She recalls an environment where people hung out on the sofa and casually talked about art, fashion and photography, socialising at watering holes such as The Bricklayers Arms and 333, where they also met new talent. “Mert [Alas] and Marcus [Piggott] lived above me which was literally how I found them,” she says. “Most contributors were friends or friends of friends.”

“In the '90s, everyone that worked at Dazed, I had met in a bar or a nightclub,” confirms Hack. Today, the business has grown significantly, with online platforms for its main titles — DazedDigital, AnOther and Another Man — attracting about 4.5 million unique users per month; social media and video production teams; a creative services agency, Dazed Media Studio; and Nowness, a lifestyle media site operated in partnership with Chinese publisher Modern Media and LVMH.

But despite its growth, the company continues to produce new talent that has gone on to conquer even the most traditional of establishments. Olivia Singer, who joined AnOther as fashion writer in 2015 and was quickly promoted to fashion features director, left Dazed to join British Vogue as executive fashion news editor last month as part of Edward Enninful’s new team. “The amazing thing about Jefferson is that he doesn’t seem to mind whether you’ve got specific experience in something, or if you’re just blagging it: all that matters to him is that you are as passionate about what you’re doing as he is,” she says. Two months into her role at Dazed, Singer was tasked with organising an all-day public event, Dazed Fashion Forum, with panel discussions and a live Rankin photo shoot. “It wasn’t even for the same magazine that I was hired to work on, but it was amazing.”

“Everyone used the word family a lot, and that might sound a little bit twee, but it really did feel like that,” Singer continues. “[It felt] like this huge, sometimes dysfunctional family where, at the end of the day, people would always have your back and, no matter how hard you were working, how much there was to do, it was fun.”

“It was the camaraderie between everyone,” says art director Christopher Simmonds, the who left Dazed in 2015 to work on projects for Gucci, Alexander McQueen and J.W. Anderson. “Everyone working together to achieve something that we were proud of, and that unified vision is quite rare. We all just wanted everything we did to be the best it could be.”

Disclosure: Osman Ahmed was a fashion writer for AnOther.

Dazed Scales Back Print to Six Issues Per Year, Expands on Web