For more than three decades, d’Ys — who is also a painter, illustrator and photographer, “a bit like Jean Cocteau,” he proffers — has quietly made loud statements for runway shows, fashion shoots and, for the last decade, several of the Metropolitan Museum of Art’s annual Costume Institute exhibits.

This year, the Frenchman did the hair for the Met’s recently opened exhibition on Rei Kawakubo, with whom d’Ys has collaborated closely since the reclusive Comme des Garçons designer first started showing in Paris in the early 1980s. “She always gives me just one word,” says d’Ys, sitting in the Colonial House Inn, a modest hotel in New York’s Chelsea. “One time, she gave me ‘invisible.’ That was difficult. I remember thinking, ‘It’s impossible, what am I going to do? No hair? Nothing?’ It made me crazy.” The result was lattices of melted transparent plastic rolls that seemingly dripped from the heads of the models as they walked in Comme des Garçons’s Spring 2017 show. 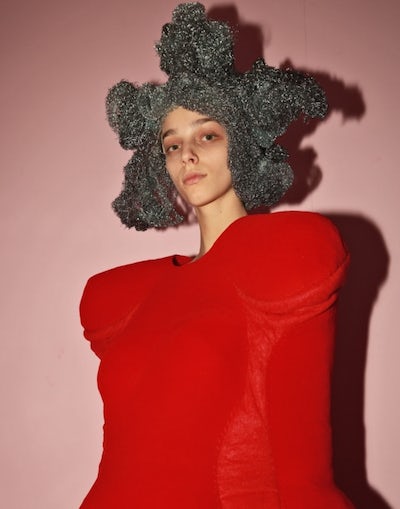 “Usually I only have two weeks to do the pieces for the show and sometimes she [Kawakubo] doesn’t tell me the word until very late,” continues d’Ys. Once he has the word, he starts creating one of his famous “carnets:” a black, hardbound A3 sketchbook that captures every element of his creative process, bulging with drawings, painting, letters, collaged objects, photography, clippings and samples of the materials and tools that he employs. His most recent carnet, for Comme des Garçons Autumn/Winter 2017, opens with a picture of a basic steel scourer from a French supermarket; d’Ys’s response to the word “silver.” “I always try and do something industrial because Rei loves to work with industrial materials — and with history,” he says, explaining how he reimagined the tight coils of the steel scourers as deconstructed, cloud-like wigs. “Sometimes she doesn’t give me the word until a week before [the show], or she doesn’t know what it is,” he admits. But d’Ys is a seasoned expert and, like any good hairdresser, he can be relied upon to work quickly.

In the stark exhibition space at the Met — a kind of all-white, clinically lit architectural installation that Kawakubo insisted on designing herself — half the mannequins are headless. The other half is bedecked in fantastically inventive headpieces by d’Ys, such as an 18th century wig crafted from rolls of tea-stained Mozart sheet music, gloopy trails of smoke-like lace, or even a three-foot platinum flame made of hair. “All of the wigs and headpieces [made for Comme des Garçons] are kept in an archive in Japan, but some pieces have just disappeared or been destroyed, so I knew that I would have to make a lot for this show,” he explains. “I create everything by hand by myself, so they are like couture sculptures.”

When I’m not free, I’m bad at it. When people trust me, I'm very good.

Julien d’Ys grew up in the Breton port of Douarnenez, which he describes as “full of fishermen and butchers,” and steeped in the kind of local mythology that let his imagination run wild as a child. With his long wiry hair, charmingly creased Roman profile and signature worn-in waistcoat and cravat, he looks like a bohemian pirate in the Byronic style of Keith Richards. “Because it’s a port, we don’t know exactly where we came from,” he says with a smile. “We could be a bit Viking, a bit African, a bit pirate." 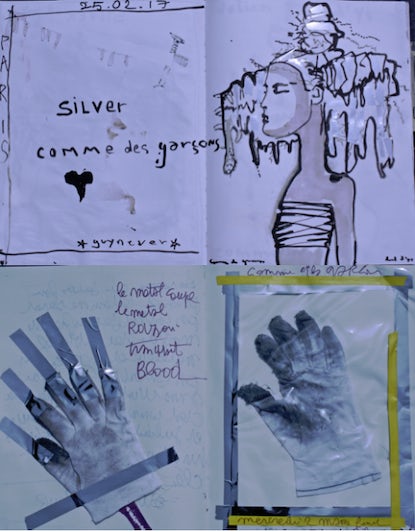 Legend has it that somewhere off the coast of his hometown lay the long-submerged island of Ys, one of the most beautiful in Europe, which belonged to a fabled king; he was betrayed by his nymphomaniac daughter, Princess Dahut, who was said to have been turned into a mermaid with long, golden tresses. “That is what I dreamt of when I was a kid,” he says (Julien d’Ys is his adopted name; he prefers to keep his real name private). The mythical island also informs the name of his studio: Island d’Ys. “I would watch Michèle Mercier as Angélique, Marquise des Anges, and all I would want to do is draw and draw and draw. I didn’t like to go to school.”

His parents later moved closer to Paris and, in his early teens, d’Ys set his sights on the French capital and began working at the glamorous Jean Louis-David salon. There, he cut the hair of Françoise Sagan, Hanna Schygulla and Catherine Deneuve, as well as Madame Claude’s real-life “belles du jour.” After a brief stint completing his national service in the French army, he returned to Paris and found himself working on Helmut Newton and Hans Feurer shoots for Italian Vogue. He soon caught the attention of Steven Meisel and the publicist Kezia Keeble; within a week he was in downtown New York living with models Isabelle Townsend and Leslie Winer.

“It was the beginning of everything,” he says. “I worked non-stop with Meisel in New York from '86, which was the Stephen Sprouse show.” Sprouse was then the king of the downtown fashion scene and Meisel did the production for his Webster Hall shows. “Stephen asked, ‘What kind of look would you do if you were doing the hair for the show?’ and I said, ‘Like this,’” he recalls, motioning the perpendicular, choppy-banged style that Sprouse’s house model Teri Toye loved so much that she made it her signature. D’Ys was booked for the show and spent the night at Toye’s graffiti-covered apartment working on Nico-esque wigs for the girls and Beatles-inspired mod cuts for the boys. 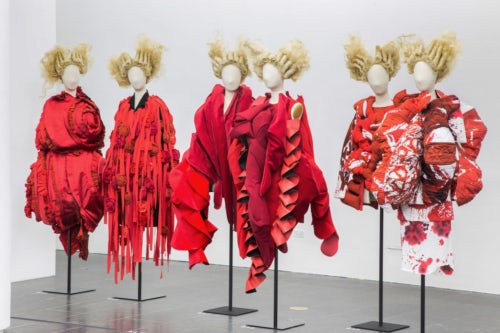 Wigs on display at the Rei Kawakubo exhibition at The Met | Source: Courtesy

“New York was crazy,” says d’Ys, who ended up on a shoot with Andy Warhol taking Polaroids of children for Vogue Bambini. “We would go into the studio and just create,” he remembers. “We didn’t know what we were going to do and nothing was planned before. Now, they do meetings before and ask about every detail. I hate working like this. It was a very creative time back then. But when AIDS arrived, everything changed in New York, so I moved back to Paris and started to work with Karl Lagerfeld and Peter Lindbergh.”

It was d’Ys who, back in the late '80s, brazenly chopped Linda Evangelista’s long hair to the nape of her neck and tossed it over her eyes, helping ignite the supermodel’s career. His work with Peter Lindbergh also helped to catapult the likes of Christy Turlington, Naomi Campbell and Cindy Crawford into the spotlight. At the same time, d’Ys started creating marcel-waved 'dos and frizzed demi-mondaine puffs for John Galliano’s earliest shows; for Galliano’s all-black show at São Schlumberger’s hôtel particulier, it was d’Ys who, at the very last minute, made Möbius strips of brightly coloured paper to sit alongside Stephen Jones’s flapper-inspired diamond-pinned cloches. He also became a regular in the pages of glossy fashion magazines, working alongside photographic giants such as Irving Penn and Richard Avedon, as well as styling the hair for Jil Sander and Karl Lagerfeld’s runway shows. “When I started on the train, I was working, working, working, and it was going fast,” says d’Ys, taking a moment to reflect on his career. “Now the train has slowed down. I want to do more of my art. I want to do a book too. I want to take more pictures, more artistic couture. I want to create my own work.” 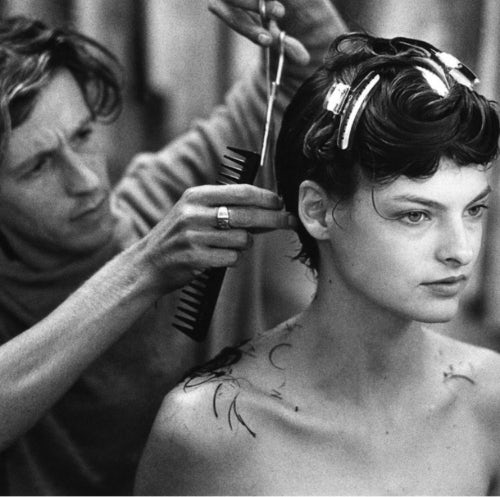 Unlike many of his contemporaries, d’Ys has never put his name to a line of products or become a consultant. “I make the money I make, and for me it’s good. I have this contract with people from Kyoto who sponsored me with products and that has helped me a lot.” The thought of d’Ys creating a shampoo is hardly conceivable considering he pioneered the "dirty" hair aesthetic, which is all about dramatically matted textures. “One day Linda Evangelista’s boyfriend told me I’d make a lot of money doing products, and Linda turned around and said, ‘But Julien never washed his hair!’ I was laughing that if I did a shampoo, I would call it ‘Dirty Shampoo.’”

D’Ys now only does showpieces for Comme des Garçons, in part, he says, because the industry has changed. “When I was doing the shows, I saw the difference when all these girls came from Russia and they all looked the same,” he explains. “Before, when we were doing shows, all the supermodels were doing the show and it was like a party! There would be champagne and it was wild, you know? We had so much fun! Now the girls, they’re like robots.” He laughs at how all the models are now constantly on their mobile phones during shows and shoots. “The first girl was Naomi. I remember, it was like a big walkie-talkie!” And despite the fact that he has taken to Instagram, d’Ys remains adamant that he prefers to stay out of the limelight.

“You have a secret garden, a secret life that nobody knows about. I have many things I don't want to tell people,” he says. D’Ys is quick to add that he is not interested in straightforward jobs that don’t satisfy his inner creativity. “People, if they use me they have to accept the way I am and what I'm going to bring to them, and not just what they want. When I’m not free, I’m bad at it. When people trust me, I'm very good.”