LONDON, United Kingdom — Menswear designer Craig Green may have only finished his MA in fashion design at Central Saint Martins last month, but the 25-year old is already turning heads. Of course, it helps that his digitally printed tie-dye collection of cotton trousers, tunics and sculptural wooden and papier-mâché accoutrements tied with Luke Brooks to win the prestigious L’Oréal Professional Creative Award. And judging by Green's unique, austere vision and the painstaking craftsmanship found in his clothes, Green deserves the accolade.

Growing up in North London, Green had little exposure to fashion. He comes, as he puts it, from a "very non-creative, non-fashion” kin. “My mom was a nurse. My dad’s a plumber. My uncle’s a carpenter. We’re just a very normal North London family.” However, Green notes that, throughout his youth he was surrounded by craftsmen and builders and thus developed an early appreciation for making things by hand. This love of craft is apparent in his MA collection.

“I’m big on “do it yourself,” he says. “I’d rather just make it on my own because then mistakes happen. And sometimes mistakes lead you to something so much newer.” Case-in-point, Green’s block printed tie-dye was the result of a projection experiment gone wrong. “If I had someone digitally print the tie dye in the beginning, I never would have made that mistake,” says Green of the happy accident.

Green first arrived at Central Saint Martins 7 years ago for a foundation course. Originally intending to pursue a degree in art, he fell into fashion entirely by chance. “I just found fashion accidentally through meeting people. I didn’t know anything about it at all.” He moved onto CSM’s BA fashion course, where he tried his hand at womenswear. “But all my womenswear was…not so good for women. My hands aren’t for fine things. I’m quite clunky,” jokes Green. By the time he reached his MA, he decided to focus on textiles and menswear. But, despite his ‘masculine’ touch, Green’s cult and workwear-inspired final collection was anything but clunky.

“I looked at a lot of religious dress and minimalist construction,” he says, noting that John Wyndham’s The Midwich Cuckoos (1957) (the basis for cult 1960 film, The Village of the Damned), as well as an image of an old-world porter weighed down by luggage, and the uniforms of dinner ladies were all strong influences. “I became obsessed with clothing as a uniform—sometimes, it’s oppressive but it also provides [the wearer] with a sense of belonging and a feeling of community.”

The concept of light and dark is also an important theme in Green’s collection. Each look he created in cream or tie-dye printed cotton has an all-black twin that’s meant to represent a shadow. However, it is the concept of utility and function that is, perhaps, most apparent, thanks to the papier-mâché luggage and industrial wooden structures that are paired with his looks. “They were inspired by luggage carriers and nomads,” says Green, adding, “the structures have connotations of religious pilgrimage and they dwarf the models, creating abstract, almost menacing silhouettes.” 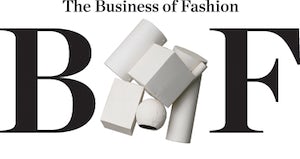 For our Spotlight this month, Green designed a logo that highlights these structures. “I chose to use the objects alone because I think there is something quite beautiful about them when they’re viewed simply as structural masses" explains Green.

Now that the MA has come to an end, Green is feeling a mix of fear and excitement. “It’s a very strange feeling leaving Saint Martins. I’ve been there for seven years so I almost feel completely institutionalized,” he says, noting that he’d like to teach at the college someday.

As for his immediate post graduation plans, he says that “nothing is certain yet,” although a show next season isn’t out of the question.