LONDON, United Kingdom — One of the greatest aspects of teaching at Central Saint Martins (apart from walking its hallowed halls) is having a first look at the strong talent that the College manages to attract from around the world, and then witnessing (often with amazement!) how that talent develops over time. The strongest students take advantage of all that CSM has to offer, and in the process, discover their own design voice and signature.

One such example is the talented, Chinese-born Huishan Zhang, who attended one of my very first lectures at CSM a few years back and graduated with a BA in Fashion Design & Marketing in 2010. Since then, Huishan has been proactive about keeping in touch as he made decisions about both the business and design direction he wished to take with his own brand. He is a young designer who listens to the advice offered to him by an informal group of well-connected mentors who he has personally sought out to advise him. Listening is a skill sorely lacking in many young designers, who years later often say, "I wish I had listened..."

In April, Zhang showed me his first ready-to-wear collection for sale to the international market. I was impressed with the polish and cohesive aesthetic of his work, but also that he has it all manufactured in China and priced as accessible luxury. Still, to showcase the skills he learned while interning at Christian Dior, Zhang also produces a couture collection with the same signature balance between Chinese aesthetic and pattern-cutting, and Western levels of quality and craftsmanship. The pattern-cutting is particularly genius. As is the case with traditional East Asian dress such as kimonos and cheongsams, everything can be transformed from flat 2D shapes laid out on the floor into 3D silhouettes on the body. 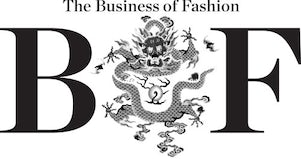 For this month's BoF Spotlight, Zhang created a striking dragon logo, referencing a print from his couture collection which was reflected in hundreds of individually sewn sequins.

"In China the dragon represents power, strength, good luck and is regarded as a deep rooted symbol of the Chinese culture. In Western society, the dragon is considered as a symbol of China," explains Huishan. "It's the perfect emblem to marry the cultures portrayed in my collections, highlighting the main values behind every garment and every woman who wears them.. power, strength and culture."

Incidentally, we're not the only ones who are excited about this young man's future. Because Magazine published a cute video with Huishan earlier this month and Browns boutique in London's Sloane Street has picked up Zhang's A/W 2011 collection exclusively, where it will sit alongside the likes of Azzedine Alaia, another genius patterncutter.

The Spotlight is BoF’s showcase for emerging talent employing creativity and business acumen to make their mark in the fashion business.