This month, the BoF Spotlight shines on Joe Richards, a young London-based designer who, after working for the likes of Céline and Dior, has debuted a women's collection under his own name, combining simplicity and sophistication for a modern, masculine effect.

LONDON, United Kingdom — For the month of March, the BoF Spotlight falls on Joe Richards, a 27-year-old designer based in London who, after stints helping to execute the visions of Phoebe Philo, John Galliano, Alber Elbaz and Alexander McQueen — has decided it's time to debut a women’s line under his own name.

The result, which he presented to buyers and press last month and is inspired by an unholy mix of references ranging from the Black Panthers and Greta Garbo to Margot Fonteyn and the 1990s music videos of rapper Busta Rhymes, is a collection of sophisticated pieces (shirts, dresses, skirts and trousers) that combine simplicity with impeccable craftsmanship, all in a palette of highly pigmented colours such as fuchsia, tangerine, emerald and indigo.

A signature of Richards’ young brand is a penchant for combining classic, humble fabrics like denim or poplin with their polar material opposites, elaborate and costly fabrications such as hand weaves, silk linings and ostrich feather embroideries in a way that somehow never feels contrived.

Fashion consultant Yasmin Sewell, who selected Richards to be the first recipient of her mentorship programme, launched last autumn, described Richards’ designs as having the “masculine glamour of Lauren Bacall with a touch of Californian skater boy.”

To wit, the line’s most striking piece is a sleek skirt painstakingly constructed out of ribbons of torn denim and, in one case, embroidered with said ostrich feathers to resemble the appearance of the loose-hanging threads that occur when denim frays.

Accordingly, that shirt at the core of the collection is obsessively worked over, until the masculine ideal is adapted to feminine proportions and effectively reinvented. “I reduced the scale of some areas like the shoulder and yoke.” Meanwhile the tail is cut longer in order to elongate the back, while sleeves are reduced to expose wrists. The neck and clavicle are other areas of Richards’ focus, “to maximize ease and elegance.” Richards is equally fastidious about “eradicating bulk, to make things look leaner,” which translates into slits cut into the sides of the shirt.

According to Sewell, it's this attention to detail, honed during years working at some of the most vaunted French labels, that sets Richards apart from his emerging designer peers: “His senior experience with big brands gives him a more sophisticated insight to a collection. He gets clothes in a commercial way. He doesn't have that crazy new designer headspace, which makes his designs more accomplished from the outset."

“What I love most about clothes is their utility and practicality,” says Richards, who collects archival clothes and often takes inspiration from uniforms. “I love their rigor and structure.” 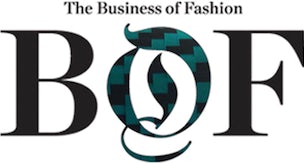 For this month's Spotlight, Richards has created a custom BoF logo featuring his signature hand weaving. “Its vivid mix of saturated colour feels like a perfect tonic to winter blues, and it's my favourite weave from the collection.”

By August, Richards expects his line to be available in selected stores across Europe. “The plan for next year is to really focus on production and getting the finish as good as I can to ensure that the piece will really satisfy the customer when it hits the store.”

Meanwhile he is already working on his next two seasons, which “will be a continuation, still built around ease and functionality. To me, a sense of reliability and practicality is the most luxurious thing, whether with friends or fabrics.”

Asked why it took him so long to launch his label, Richards says: “I love working with others and envisaging their philosophy and perspective, but ultimately I was ready to honour my own experiences in life.”