While white shirts are at the core of Palmer Harding, the designers stress that the brand’s vision is not limited to one type of garment. “We’re not just a white shirt company. We’re a designer brand that starts with shirts,” explained Harding. But not wanting to add noise to a crowded fashion market, or take on too much, too soon, the duo aim to perfect their shirts, a piece of clothing they feel is often neglected, before moving on to a full line.

“It’s easier to start a business having one focused thing. I think [people feel] there’s a need to rush in fashion. But we’re going to take our time,” he continued. “And when we do branch out into other aspects, we want them to highlight the beauty of the shirt. We don’t want to detract from what our core brand is about,” added Palmer.

The Texas-born Palmer and London native Harding met in 2007 while studying at Central Saint Martins. The pair strike a smart balance with their contrasting fortes: Palmer, who credits his American upbringing for his rational, realistic approach to design, obtained a degree in pattern cutting from Dallas’ El Centro College before going on to get a BA in menswear from Saint Martins, while Harding, the dreamer of the pair, received both his BA and MA in womenswear from Saint Martins. Both designers enjoyed flourishing freelance careers at high street companies before launching their own line. And while they had toyed with the idea of starting their own fashion line for some time, it was a 2011 ANDAM nomination that prompted them to take the leap. “At the time, we didn’t have a business. We didn’t have a label. We got [the nomination] on the back of my MA collection, which Levi worked on,” said Harding.

As for perfecting their shirts, the duo is well on their way. For Spring 2011, they sifted through 300 different types of cotton before finding the perfect fabric, sourced from a mill in Switzerland. Offering his and hers shirts in white, dusty mint and grey, the designers found inspiration in vintage couture, as well as photographs of youthful delinquents by Ingar Krauss, inputs which materialised in corrugated pleats – each of which are separated by rubber-coated metal hardware – grosgrain details and precise silhouettes. 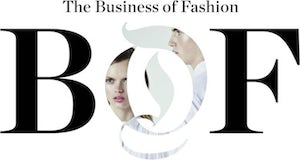 For our Spotlight this month, the duo have created a custom BoF logo that beautifully captures the quiet elegance and smart simplicity of their work.

“The main craftsmanship is done by us and there’s something special about that. I think it’s much more personal that way,” said Harding. In order to save money, the dedicated designers live and work out of a quaint studio in Harding’s parents home on the outskirts of London. But their efforts are paying off. Their inaugural collection is now stocked at Joyce in Hong Kong, Concerto in Tokyo and online at Avenue32.

As we look forward to their Autumn/Winter 2012 collection, to be unveiled at London Fashion Week next month and for which the designers are making their first foray into shirtdresses, we wish Palmer Harding the very best of luck for what’s sure to be a bright future.