The Spotlight | Thamanyah by Ahmed Abdelrahman

PARIS, France — “I met him at the gym, in his boxing shorts, fancy sneakers and large Kelly Bag as a gym bag,” recalls Michèle Lamy — Rick Owens’ captivating muse, wife, and business partner — of her Dubai-born, Paris-based protégé, Ahmed Abdelrahman. “He was able, in a couple of months, to mingle Middle-Eastern and Western culture in a such a chic, clever, refined way — mind-blowing,” she exclaims.

Indeed, Abdelrahman’s precise, sculptural and conceptual line, Thamanyah, maintains an unusual aesthetic tension between the ancient and the innovative. His signature piece is a kandora, a traditional, ankle-length Middle-Eastern garment, usually made out of cotton that Abdelrahman has reimagined in virgin wool.

“Nature seems to be an eternal source of inspiration,” says Abdelrahman of his elemental yet sharply constructed pieces. For Spring/Summer 2013, the designer is set to introduce “razor crotch” pants in three different lengths, inspired by “the soft and sharp edges of sand dunes.”

But perhaps most importantly, Abdelrahman feels the spiritual weight of his clothes. “Evolving the kandora is not a styling project,” he insists. “It requires a deep understanding of the culture it is coming from. There are heavy tribal, religious, political and historical dimensions hidden in the garment.”

As for the name, Thamanyah means “eight” in Arabic, a reference to Abdelrahman’s eight siblings and the eight-pointed star that symbolises the eight gates of heaven frequently used in Islamic art and architecture.

The entire line is produced in small quantities in Italian ateliers, on which Abdelrahman keeps a close eye. Indeed, he says that poor execution of mainstream kandoras have contributed to the loss of the garment’s emotional weight. “For the past 30 years, the fate of the contemporary male wardrobe in the GCC (Gulf Cooperation Council) countries has been controlled by foreign labourers who do not wear these garments, nor understand their emotional meaning.”

Abdelrahman was a mechanical engineering student who went on to work in the luxury jewellery sector, shuttling between Abu Dhabi and Paris. The idea to launch a fashion line began as a small personal project. “I wanted to create a small collection of kandoras that I could wear when travelling abroad — not only at home in the UAE.”

It was Lamy who first encouraged him to turn these initial pieces into a full-blown collection. “She was the first person to see my work. I was a bit sceptical about launching a brand on my own, especially as the project would require a huge financial investment on my behalf, but Michèle’s reaction was most assuring. She has the sharpest instincts. I can measure the success or failure of a certain idea by observing the reflex in her eyes.”

Indeed, Lamy’s support has been critical to the growth of the young label, as has also been the case with another of her protegés, Gareth Pugh. “Having seen the collection, without even telling me, Michèle approached Luca Rugerri who, in turn, introduced Thamanyah to a small group of visionary buyers,” recalls Abdelrahman. “Michèle is also the godmother of Thamanyah from an operational perspective,” he continues. “She is a fierce protector of Thamanyah’s commercial operations, especially in Paris.”

Today, the brand is stocked in a number of highly influential stores around the globe, including Atelier and Barneys in New York, LN-CC in London, Darklands in Berlin, Degli Effetti in Rome and The Number 4 in Kuwait.

“The cuts are extremely well executed and the shapes inspired by Middle-Eastern dress were an interesting take on what is essentially a very classic and tailored garment,” says John Skelton, creative director of LN-CC, on his decision to stock the line. “But even when you remove the initial inspiration and elements of cultural dress, the garments stand alone as extremely well-made pieces realised in high quality cashmere, silk and wool mixes.”

The pieces are in tune with “the current zeitgeist in certain areas of men’s fashion: global traditional garb has been used a source of inspiration for designers for several years, so it was only a matter of time before the kandora would be embraced,” adds Karlo Steel, owner of Atelier. 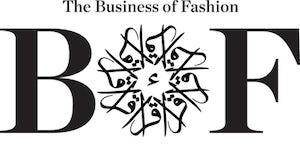 For this month’s spotlight, Abdelrahman has designed a custom BoF logo in Arabic calligraphy that states, flatteringly: “read BoF.”

On the future, Abdelrahman says: “I wish for Thamanyah to create beautifully crafted, high quality products, that our clients really wear and with time, readjust, perhaps repair, and eventually, after many many years, would still want to pass on like a rare edition of a great book that gains value and meaning over time.”

With Abdelrahman set to launch a pop-up store in collaboration with Rick Owens in January, in Dubai, where he will also present his work, in March, during Art Dubai, it is with great pleasure that we shine our Spotlight on Thamanyah and wish Ahmed the very best of luck in pursuing his vision.

Alice Pfeiffer is a writer based in Paris. The Spotlight is BoF’s showcase for emerging talent who employ creativity and business acumen to make their mark in the fashion business.