Tim Blanks reflects on the career of Anna Sui, who opens an exhibition this week at London’s Fashion and Textile Museum. 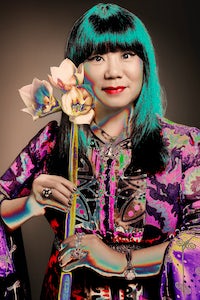 Tim Blanks reflects on the career of Anna Sui, who opens an exhibition this week at London’s Fashion and Textile Museum.

NEW YORK, United States — “I’m American, born in suburbia, raised on pop culture,” writes Anna Sui in “The World of Anna Sui,” published this month to accompany an exhibition at the Fashion and Textile Museum in London. “And, being American, I’ve always wanted to be an American designer.”

Full disclosure: I’m a hopeless fanboy. I worked on Sui’s book with her. So of course I’m going to say she’s a great American designer. But more bewitching is the fact that she is a great American dreamer, in the grand tradition of everyone who ever followed a fantasy to New York or LA and recreated themselves in that fantasy’s image. For 25 years, Anna’s collections have offered object lessons in the art of becoming. And that’s what keeps her most American in the face of her ardent transatlanticism, with its love of the Rolling Stones, Biba, Aubrey Beardsley and all the other artists and aristos and popstrels and stylish Euro decadents whose ghosts have crowded her catwalk over the decades.

Her parents met in Paris when they were students. They couldn’t go back to China, so the land of opportunity beckoned. Anna was born and raised in Dearborn, Michigan. “We were the only Chinese family in town, but I don’t know if I particularly thought at this point about being Chinese, about being so different in that context,” she writes. “I guess because it was just us, we were a novelty, not a threat.”

But whenever they went to a game in another school district, they were teased. Sui wonders now if the ability to create other worlds for herself, which manifested itself at a very early age, was her own way to underscore the alien, “to define myself outside the culture.”

Her parents wanted her to be a doctor. From the age of six, she had other ideas. But Sui was also a middle child, a girl between two boys. In the genetic lottery of Chinese families, she didn’t really count, so she was left to her own daydreams. And they were powerful, shaped by 16 Magazine, then Seventeen, movies, rock stars and their gorgeous girlfriends, television, television... “Leave it to Beaver,” the Beatles on “Ed Sullivan,” those communal experiences that are now as much a figment of the past as ancient myths.

I look back at all the characters I’ve drawn on and there’s always something slightly off-kilter.

Her own faith in American myths and legends also qualifies Sui as an American dreamer. Early on, she wised up to the power of narrative in fashion, the aftershock of her adventures in styling with her close friend Steven Meisel (whose image-making distinguishes him as fashion’s most fabulous mythologist). I think of Sui’s Spring 2005 collection. Victoriana was having a moment in the spotlight, and that got her wondering about what was happening in the US at the same time. She showed cowboy leathers, Indian feathers, the military jackets of demobbed Civil War soldiers, the prairie skirts of pioneer women, the lingerie of saloon girls, in a widescreen tribute to the Western.

Equally cinematic was Spring 2011’s sun-bleached salute to Terence Malick’s “Days of Heaven,” one of her favourite movies, and also a good excuse for her to revisit the ladies of Laurel Canyon, the mythic nymphettes who inspired the rock gods of late ’60s LA. This collection — crocheted, cross-stitched, embroidered, trailing lace — celebrated the hippie handcrafts of the West Coast.

Sui has always been a bicoastal fashion fantasist. Gigi Hadid opened Sui’s Spring 2017 show in a rose-appliquéd black leather cowboy jacket produced in collaboration with South Paradiso. This Californian company inherited the legacy of East West Musical Instruments, which made custom orders for Elvis, Jimi Hendrix, Janis Joplin in those pre-lapsarian ’60s. And, before that, there were the beach party movies — and Beach Boys — which were magical to a girl living in the Midwest. 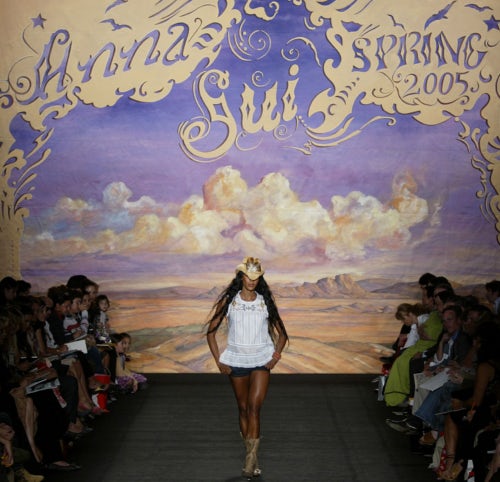 That magic has occasionally worked its way into her collections. It’s easy to understand its otherworldly appeal to a Chinese girl growing up in the dark shadow of the Stooges and the MC5 in Detroit. On reacquainting herself in adulthood with the genre, Sui was taken aback by the hideousness of the films she used to watch. Their power as pop cultural totems was irresistible, however.

“The darker truths behind all that sun and surf and blonde hair and white teeth appealed to my twisted side,” she writes. Meisel photographed her surf collection on Lisa Marie Presley, completing a circle: Elvis’ moment in the sunshine was eventually eclipsed by his own dark shadows. And that was the photographer recognising the power of narrative in Sui’s work.

It’s an intriguing thought that Anna Sui might have had a kindred spirit in Andy Warhol, if you agree that Sui is, like Warhol, an outsider looking in on America. That is often the best vantage point to gain perspective on the soul of a place. Like special kids of her generation all over the world, Sui was magnetised by Warhol and his Factory coterie. She moved to New York in the hope of meeting people like that. When she finally did meet Warhol, it was in a nightclub and she was wearing enough jewellery that he may have assumed she was rich. So he offered to paint her portrait. His interest lasted as long as it took her to tell him she couldn’t possibly afford such a thing.

Warhol always appreciated the ironic in the iconic, and Sui relates. “I look back at all the characters I’ve drawn on — like the preppy, the golfer, the folk singer, the showgirl, the cowgirl, the Factory girl — and there’s always something slightly off-kilter,” she writes.

That golf collection, for instance, Spring 2003. Sui used Slim Aarons’ glossy images of WASP America as a reference point: power and privilege, country clubs, pony clubs, beaded golf clubs and tennis rackets. But she added her own twisted, eccentric edge, with layer after layer of the research she undertakes for every one of her collections.

Sui is the poster girl for a better land of opportunity than the one that is currently baring its teeth at the world.

Sui insists that research is what she loves best. For years, she’s been doing double duty as a cultural archeologist, unearthing entrancing obscurities, for instance, the poppy motifs of Hungarian-born hippie designer Eszter Haraszty, and pansies inspired by the work of New York-based needlepointist Erica Wilson. She even winkled out the place that made ribbons for horse shows and had them embroidered with her name. What eventually came down the catwalk was WASP more by way of Wes Anderson than Slim Aarons.

In dozens of often undetectable ways, Sui is dedicated to keeping American craft alive. Her commitment is plain in her campaign to save New York’s Garment District, the Manhattan district less than a square mile that was once the engine of the American fashion industry. It’s been gutted by the shift offshore in search of cheap labour and production, and its decline has seen the end of all the small suppliers that once serviced designers. Sui made it her mission to meet as many of them as possible, the trim people, the button people, the pleating and embroidery people, the old men at the end of their working lives whose experience would expire with them. She’s used them whenever she can, often to re-create a fabric, a print that there’s been no call for for years.

Call that a celebration of American ingenuity, an acknowledgment not just of her many creative influences — the beautiful mavericks who’ve inspired her — but of the people who’ve helped her collections take shape. Creativity and collaboration, diversity and pragmatism, independence and fierce individuality, limitless and free: Anna Sui is the poster girl for a better land of opportunity than the one that is currently baring its teeth at the world.