The Year Ahead: Mass-Market Goes On-Demand

LONDON, United Kingdom — Design and production are typically a long and cumbersome process, sometimes requiring nearly a year to plan and move products to market. Technology, analytics and nearshoring are part of the solution, enabling companies to respond quickly to source and develop products, squeeze production timelines and streamline distribution. Start-ups are at the vanguard of this, but some mainstream players are also stepping up and delivering.

The power of social media means trends are now more often established by consumers, as opposed to retailers and editors. In an era of fast-changing preferences, being able to respond to shifting demand, and tailor production accordingly, makes a lot of sense. Fashion is seeing the start of a seismic shift where products are “pulled” into the market based on actual demand rather than “pushed” based on best-guesses and forecasts. The change is significant. Previously, procurement, production and distribution were predicated on designer and buyer predictions of future consumer demand. Products were produced and marketed in traditional “seasons.”

Under the “pull” dynamic, procurement, production and distribution are based on customer demand. There is an accompanying “supermarket” model, by which inventory is only replenished once consumed. From an economic perspective there are positives and negatives to on-demand production. On the plus side, it requires lower capital investment, and leads to smaller inventories and more flexibility and agility. Shorter-turnaround cycles can reduce demand uncertainty and contribute to a more sustainable small-batch production cycle. However, production costs are generally higher, due to the smaller batch sizes, as are transport costs if production is nearshore or offshore. Nonetheless, companies including Zara, Boohoo and Asos have embraced the model.

60 percent of apparel procurement executives expect that over 20 percent of their sourcing volume will be from nearshore by 2025.

The switch to “pull” can be boosted by moving production closer toward nearshoring and onshoring, enabling same day production and next day delivery. This is a far cry from the past, when lead times from design to retail were counted in weeks rather than hours. According to a study by Goldman Sachs, there is a direct inverse correlation between supply chain lead times and like-for-like sales growth. Equally, industry executives expect nearshoring to grow. According to recent survey results published by McKinsey, 60 percent of apparel procurement executives expect that over 20 percent of their sourcing volume will be from nearshore by 2025.

A related enabler is automation, which for some products will offset the cost disadvantage of procuring closer to home. While apparel manufacturing automation may still be subscale, technologies being developed show its massive potential. Stand-outs include digital and laser printing for finishing (allowing for nearshoring for final touches combined with automation or low-cost sourcing of the basic garment), knit-innovations (e.g. 3D knitting), semi-automated sewing and automated logistics. These can help companies reduce labour intensity, do more customisation, improve reliability and cut process times.

Another opportunity is in microfactories, which enable high speed, agile garment production. They are used in the design studio to speed up the prototyping process, or on the shop floor, to provide high customisation and zero waste. According to Lisa Lang, founder and chief executive of ThePowerHouse, a fashion-tech agency, “microfactories will take off on the next few years and there is evidence of a few players already developing them.”

Start-ups are taking advantage of these technologies to produce garments “on-demand.” Berlin-based Lesara, for example, produces 90 percent of products in-house, and claims a 10-day turnaround time from identifying fashion trends to putting products on the market. Technology players are also contributing. Companies such as Softwear and Sewbo have revolutionised garment production machinery, using robotics to fully automate sewing. Sharecloth, a New York based software company, contributes to on-demand by digitising styles and enabling retailers to place orders before products are ever manufactured. 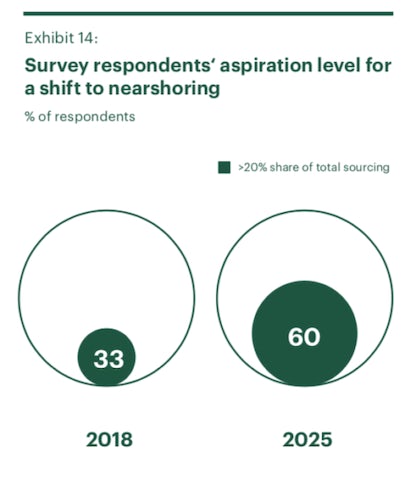 Adidas is one of a group of large brands that are showing signs of leveraging speed to shift towards on-demand. Aside from its Arkansas operation, it operates “Speedfactories” in Atlanta and Germany that together are expected to produce around a million pairs of running shoes a year by 2020, using digital design to enable mass customisation. Superdry launched “Superdry Preview,” limited-edition collections that will go from design to delivery in just 6 weeks. In 2017, Amazon secured patents for a fully automated, “on-demand manufacturing system” for apparel. Uniqlo parent company Fast Retailing has signalled its intent to produce on-demand knitwear at scale through its partnership with Shima Seiki. Shima Seiki produces 3-D knitting and technology it labels “Wholegarment,” which produces seamless knitwear and requires no post-production labour, and anticipates that its tools and machines will enable “mass customisation.”

Major players are also leveraging advanced analytics to revolutionise the planning and production process. In some cases, this is enabling garment customisation on a mass scale. For example, in late 2017, Japanese online player Zozotown launched “Zozosuit,” a body scanner that could take measurements for made-to-fit jeans, T-shirts and suits. Founder and chief executive Yusaku Maezawa expects Zozosuit to revolutionise the scale of personalisation. “People see the Zozo brand as providing clothing specifically tailored to individuals,” he told us, “so we’re looking to create a presence that closely resembles that infrastructure. We’d like to get to where people associate us with clothing made to fit the shape of the body.” The company expects to sell six to ten million suits within the year.

Strategically, however, there are differences between start-ups and leading brands. Rather than jump into on-demand fashion, established companies are likely to proceed step by step. This is partly because there is a high cost and disruption to actions such as radical supply chain transformation.

In the coming year we expect to see continued investment in speed (both through capability building and M&A) via more onshoring and nearshoring, virtual sampling, microfactories (rapid prototyping) and automation. Reduced lead times will be key drivers of competitive advantage. Small-scale players will likely lead the way, while larger brands pilot in selected markets. We expect rising take up of on-demand will lead to a spike in personalisation, and a new generation of customised clothing start-ups, creating a new definition of “made-to-measure.” In the technology space, automation intellectual property will continue to develop, with patent approvals likely to be a critical success factor in the years ahead.