South African designer Thebe Magugu has been awarded the LVMH Prize, and will receive €300,000 and a year-long mentorship.

PARIS, France — Thebe Magugu is the winner of this year’s LVMH Prize, marking the first time a designer from Africa has picked up the award.

The 26-year-old designer, originally from Kimberley, South Africa, is known for his contemporary style and use of local suppliers. He launched his womenswear label in 2016 after studying fashion design, photography and media at the LISOF School of Fashion in Johannesburg. He has operated out of his home, and had never been to Paris before this year.

Magugu will receive a €300,000 grant and a year-long mentorship from executives at the French luxury conglomerate. He said he plans to put the money toward a studio space and to employ more artisans in South Africa.

“Winning the prize means the world to me. €300,000 [goes] a very long way,” said Magugu. “The unemployment rate is 30 percent of the youth in South Africa. That is massive. I want to do my part.”

Earlier this year, Magugu won the overall award for curation and fashion content at the International Fashion Showcase, supported by the British Fashion Council and others before receiving the LVMH Prize from Louis Vuitton's brand ambassador Alicia Vikander on Wednesday at the Louis Vuitton Foundation.

The decision was made by a jury of industry figures, comprising designers Kris Van Assche, Maria Grazia Chiuri, Jonathan Anderson, Nicolas Ghesquière, Marc Jacobs and Clare Waight Keller alongside Delphine Arnault, the force behind the initiative, Jean-Paul Claverie and Sidney Toledano of LVMH.

Magugu describes his work as “eclectic”.

“South Africa is a place where there are so many dualities. It is both very beautiful and violent. It informed my work,” he said. 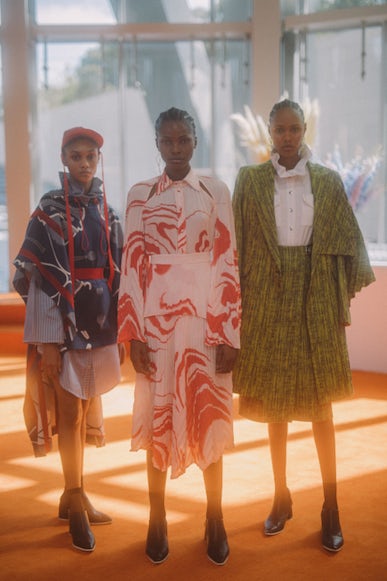 He wants to stay in South Africa.

“That’s my mission as a designer. I want to show the world that from South Africa you can get the entire cycle of production,” he said. “There are challenges I am not going to lie, in terms of infrastructure and system but the promise is there. There’s so much talent in the country.”

One of the biggest hurdles he said he faces is logistics. He said he told the jury that he hoped to tap into LVMH’s global network of stores.

“The one thing I really struggle with is distribution, particularly shipping. It’s so easy to import in South Africa but getting out is what’s very tricky,” he said. “[LVMH] really understands how to get a product where it needs to be.”

That impressed at least one of the judges.

“It’s the first time that I listen to someone who has more interest in the infrastructure support that we can bring than the money itself,” said Chiuri. “He has the idea - so young - to develop a global brand.”

He impressed the jury with his feminine, contemporary collection for Spring/Summer 2020 that included a pleated white and red dress, using a specific African mud instead of a print, adding a few agents in the mix so that it doesn’t fade when you wash it.

“It’s about trying to build silhouettes with what you have and how do you make that system work. I think that that money will make that start from the very beginning on the right track,” Anderson said.

“I feel that Africa has some of the best craft,” Anderson added. “For the panel, having someone say ‘I want to make a business in Africa’ was really compelling. I think we are in this moment where it is about giving opportunity, about transformation.”

Having someone say 'I want to make a business in Africa' was really compelling.

Magugu incorporates a microchip in every garment, using an app called Verisium. The technology can be used to display a description of the fabrication, a picture of everyone who worked on the garment and the general story behind the collection.

“The entire story is all in there. Every six months for example, it can send a notification, thus engaging with the consumer,” Waight Keller said.

The newly titled Karl Lagerfeld Prize was also awarded to the Hed Mayner label helmed by its 32-year-old namesake designer. Mayner receives a grant of €150,000 and a year-long mentorship from the LVMH group. Mayner, who studied in Jerusalem and is based in Tel Aviv and Paris, presented a collection involving cotton, linen and a play with proportions. 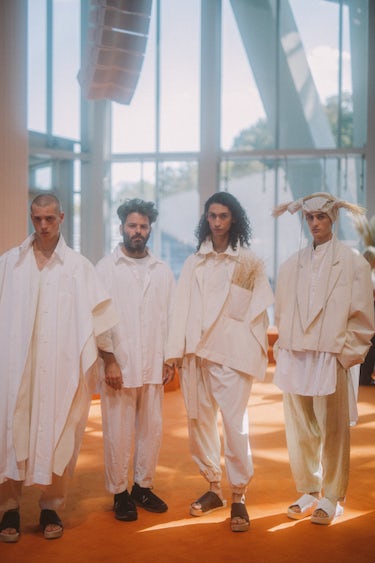 Mayner, who distributes in 70 stores worldwide, said that the grant will help structure the team. “We are a small team -four including me- so the minute you can hire somebody, it changes the whole environment.”

The LVMH Prize was launched in 2014. The first three recipients were London-based designers who graduated from Central Saint Martins: Thomas Tait, Marques’Almeida and Grace Wales Bonner. In 2017, Paris-based designer Marine Serre scooped the prize while Masayuki Ino of the Japanese streetwear label Doublet was crowned the winner in 2018. Last year the Special Prize was awarded to Rokh, with other previous winners including Simon Porte Jacquemus and Vejas.

The LVMH Prize winner’s collection will be available online at LVMH-owned multi-brand e-commerce platform 24S.com. Some 50 pieces from the collections of the eight finalists are already exclusively available on the site for the occasion.

Turning the Focus Back on South Africa