NEW YORK, United States — It was 2010 when Tibi founder and creative director Amy Smilovic finally had enough. The pioneering contemporary label, founded in Hong Kong in 1997, was, like many of its competitors, at a standstill. Post-recession, the wholesale model was failing. “I told my husband that I felt like we were driving the car through a tunnel of fog,” she recalls. “Zara and Topshop were opening up everywhere, and I didn’t want to come down on price because the quality would be compromised.”

Fast fashion was taking over, and department stores were asking Smilovic to produce sexy dresses that had nothing to do with Tibi’s DNA, which, for its first 12 or so years, was deeply rooted in prints. And that was the other problem: Smilovic no longer believed in prints. “I didn’t like anything we put out,” she says in the company’s NoHo offices, dressed in an oxford-blue full-sleeve blouse of her own design, which is paired with black Vetements denim and Bergdorf Goodman private label loafers. “I didn’t wear the clothing. Every time I had to do an interview I would go put on what I called my Tibi costume.” 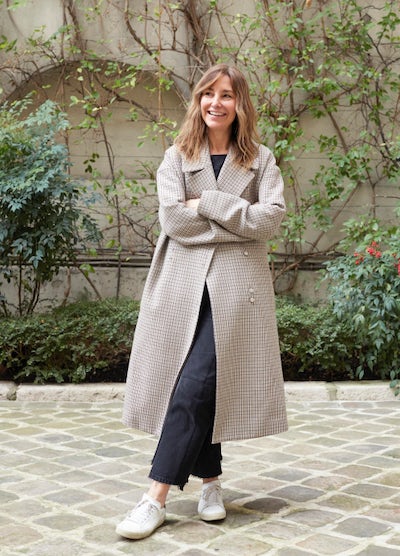 So, instead of continuing to churn out so-called margin drivers and watch her identity wilt away, Smilovic made two image boards and set them up in the studio. One board featured runway images from mid-priced brands like 3.1 Phillip Lim, Alexander Wang and Rag & Bone. The other was covered in looks from print-driven brands, including Trina Turk, Nanette Lepore, Milly and Diane von Furstenberg. She brought in her employees — both the sales and design teams — and asked them to have a look. “I said, ‘Name the designer.’ On the left board, they all immediately said, ‘Alex, Phillip, Rag…’ They knew who was who,” she remembers. “When they got to the other side, there was so much debate. No one had any idea. And I told them, ‘This is why we are not going to be about prints. It’s not a defining characteristic. We are going to be about what I want to be about.'”

From there, in the midst of launching e-commerce and entering what was destined to be one of the most challenge eras in the history of apparel retail, Smilovic chose to start over again, doing away with everything that made Tibi Tibi, save for the name. “I thought, if we don’t really stand for something and make this brand very authentic and meaningful — to me, at least — then it’s not going to be meaningful to anyone,” she says. “And that can be the only point of differentiation from Zara.”

A full-on revamp was a risky move. In 2010, Tibi generated $22.4 million in sales and had managed to avoid the widespread layoffs that so many companies were forced to implement during the recession. But Smilovic, who co-owns the business with her husband, chief executive Frank Smilovic, believed that the business would not survive if she did not rethink the entire brand concept.

I didn’t like anything we put out. I didn’t wear the clothing. Every time I had to do an interview I would go put on what I called my Tibi costume.

She offered her design team, some of whom have been with her for more than a decade, directive to make clothes they would want to wear.

“We had boiled down our descriptor into [four] adjectives: everything that we do has to be clean, modern, relaxed — the extrapolation for that was that it could never be fussy — and it has to be feminine, meaning that it had to be refined,” Smilovic explains. “We didn’t need words in our vocabulary like edgy or tough, or anything like that. Clean, modern, feminine and relaxed: If every piece we did encompassed those, then everything was going to be where our DNA was.”

Smilovic brought in Swedish influencer Elin Kling to style the shows, and began turning out the sort of sleek, but never complicated, pieces that she and her team gravitated towards in their personal lives. For Spring 2012, Tibi’s breakout season, that meant slip dresses, short suits, low slung trousers in soft pastels. To say it was a departure from the sequined, fit-and-flair florals Tibi had produced in the past would be an understatement. From there, the aesthetic has developed into a modern wardrobe; every season, a woman can outfit her entire closet with the collection’s wide-ranging separates, tweaked ever so slightly in silhouette to maintain relevancy.

While the editorial reaction to Tibi’s new look was positive, it took buyers a moment to adjust. “Back in the showroom, we still had a lot of prints,” she says. “We said, alright, let’s just have another season where at least in the press we can project what we want to project but we don’t have this quite fixed at the store level yet.” At one point in the process, Tibi reached out to Neiman Marcus about moving the collection out of the dress section — a sort of fuddy-duddy area of the store — and onto the contemporary floor, a transfer that would signal a change in attitude about the brand. Neiman said no, and Tibi chose to exit the business. Six months later, Tibi was back in Neiman and sitting on the contemporary floor. “That was one of our first big wins.”

The Smilovics were able to push back against department stores because they could afford to take the hit for a while, in part because the business is entirely self-financed. They don’t have to answer to investors, who might be concerned that losing a major department store account could hurt the bottom line.

But they also did something unorthodox. Instead of doing away with the margin-driving stodgy styles altogether, they set up another brand that consisted of old best sellers. “We took out all the dress bodies that were fine, but we didn’t want in our line. Things that were fitted, things that fit and flared, cap sleeved,” she explains. The collection, called 4.collective, generated $3 million in the first year, supplanting sales while Tibi was re-established.

4.collective was introduced separately in a Garment District showroom, and the origins of the brand were never communicated to the press. Buyers were tipped off though, and told that if they wanted to carry those best-selling bodies, they could find them under the 4.collective label. “It gave us the money to say, ‘We need to stay on course now with Tibi. We don’t need to worry or be constantly looking behind us to make sure that we don’t go out of business,’” Smilovic continues. “It allowed us to clean up the brand and set out on a mission to make sure that everything we did passed muster.”

Along the way, Tibi began to build its e-commerce presence, relying less on wholesale partners to generate revenue. It also developed a reputation for spotting directional silhouettes before the fast fashion chains got a whiff of them. The label’s loafer slide, for instance, was introduced for Resort 2012, long before Alessandro Michele’s version made news at Gucci. The full midi-skirt, off-the-shoulder top, and culottes are all silhouettes that Tibi owned long before the rest of the high street caught on.

We’re not just taking a trend from drawing board to sample. If we are committed to something it’s because I’ve worn it for a full year in advance.

Not all retailers have been quick to pick up on Tibi’s cues. The off-the-shoulder blouse trend, which the brand introduced more than two years ago, is now everywhere. But last summer, “We had one store who came in with all of their charts, and they just totally missed,” Smilovic says. She, on the other hand, green-lit production of $500,000 worth of off-the-shoulder blouses. “We decided to just run with it because we could dump it if it’s the wrong thing,” she continues. “We were sold out of inventory in less than two months. That store came in this year and told us they were ready to buy in.” Smilovic, of course, has moved on from off the shoulder. “We just told them, ‘You missed it. You have to trust us on trends because we’re not just taking it from drawing board to sample.’ If we are committed to something it’s because I’ve worn it for a full year in advance. We really try this stuff out.”

By 2015, with the Tibi brand on its way, the Smilovics were able to shutter 4.collective. This year, the profitable company is set to generate $45.5 million in revenue, a 103 percent increase from 2010. About 35 percent of that business is overseas, while 26 percent of the business is e-commerce.

However, the company plans on making direct retail, both online and physical, a significantly larger part of the business. Right now, Tibi operates one full-price store in SoHo, and an outlet store in Saint Simons Island, Georgia, where Smilovic was raised. “We would like to open stores in about five locations that make sense,” she says. “I think a strategy beyond five locations is a much bigger thing to think about.”

There is also a focus on expansion abroad. “I would say we’re not perceived as an American brand. That’s the first comment that people usually make,” Smilovic says. London, the Middle East and Asia are all growing markets. “Russia used to be big, Greece and Spain used to be big but those just don’t exist anymore,” she continues. “We are looking to penetrate France, but France is very difficult. They support their own designers.”

However, this sort of growth might require something that Smilovic has never needed before: an outside investor. “We haven’t yet found the right partner,” she says. “A lot of people come in and want to trim the fat right away, and we don’t have a lot of fat to trim. We just have not entertained any phone calls for a while because we don’t want to be distracted.”

Indeed, if Smilovic’s experience with Tibi has taught her anything, it’s that the first person she has to listen to is herself.