The former LVMH executive will be replaced by chairman Michael Kowalski, who will serve as interim CEO while the board recruits a successor. 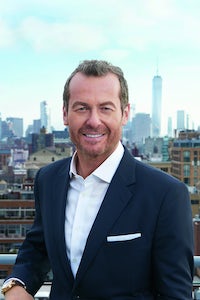 The former LVMH executive will be replaced by chairman Michael Kowalski, who will serve as interim CEO while the board recruits a successor.

NEW YORK, United States — Frederic Cumenal, the luxury industry executive tasked with turning around struggling jeweller Tiffany & Co., is exiting his role as CEO. Cumenal will be temporarily replaced by chairman Michael Kowalski, who will serve as interim CEO while the company’s board recruits a successor.

"On behalf of the entire Board of Directors, I would like to thank Frederic Cumenal for his contributions to Tiffany," Mr. Kowalski said in a statement. "At a time of continuing challenges in the global luxury market, Frederic has enhanced the management team and taken important steps to position Tiffany for success in the long term. We wish him the best in his future endeavors."

"I am proud of what we have accomplished at Tiffany and would like to thank the management team and our many talented employees around the world with whom I have had the pleasure to work,” said Cumenal. “I have great confidence in Tiffany's brand, strategic direction and people, and I believe the company will have many exciting opportunities in the future."

Cumenal joined Tiffany in March 2011 after 15 years at French luxury conglomerate LVMH, where he held several roles in the company’s wine and spirits group. His rise was swift. The executive moved in just one year from a senior vice president role overseeing Asia-Pacific, Japan, Europe and “emerging markets” to senior vice president overseeing all regions. In September 2013, he became president, responsible for global sales, marketing, merchandising, design and distribution and joined the company’s board of directors. In April 2015, the board appointed him chief executive, replacing longtime leader Kowalski, who remained chairman.

Cumenal was integral in the hiring of design director Francesca Amfitheatrof, a design industry star who aimed to refine the Tiffany brand with her upscale, modernist “T” Collection. However, in January 2017 it was announced that Amfitheatrof would be leaving the company, effectively replaced by former Coach designer Reed Krakoff, who would assume the new role of chief creative officer.

Tiffany has endeavored in recent years to maintain its standing an industry leader, faced with challenges in both mature markets like the United States and emerging markets including China. But it has faced the same problems as its competitors: the strength of the dollar, the tightening of anti-corruption laws in China, which has affected gifting, and the general slowdown of the hard-luxury market, in particular, diamonds: its bread and butter.

During the 2016 holiday period — November and December 2016 — net sales were $966 million, up slightly from $961 million a year earlier. But worldwide sales at stores open at least one year declined 2 percent, while sales at the company’s flagship store on Fifth Avenue in New York City declined by 14 percent. The troubles at Fifth Avenue were in great part due to proximity to Trump Tower, which has been barricaded in one way or another since the election of President Donald J. Trump and has frequently drawn crowds of protesters, hurting local retail along the way.

In addition to Krakoff’s arrival, the company recently announced the launch of a new collection called HardWear, with Lady Gaga serving as its campaign star. A preview of the collection went live on Tiffany.com on Sunday in anticipation of her Super Bowl halftime performance and Tiffany’s commercial featuring the pop star. (It marks the first Super Bowl commercial ever produced by the brand.)

Whomever does indeed replace Cumenal will need to be a partner to Krakoff, who is sure to shift the direction of the company in certain ways.