LONDON, United Kingdom — In 2016, UK schools dominated BoF's annual global fashion school rankings. Topping the list at both BA and MA level was London-based Central Saint Martins, one of the only schools in the world to show its MA graduates' collections on-schedule during a major fashion week.

The internationally renowned institution has trained some of the biggest names in fashion, including Alexander McQueen, John Galliano and Phoebe Philo, as well as some of London's most exciting emerging talent such as Craig Green, Phoebe English and Charles Jeffrey.

This year, 37 students from 13 countries, including China, Germany, Brazil, Gibraltar and more are set to graduate the MA course, of which 16 will show their collections to an audience of international press, buyers and other influential industry insiders.

"I think it's a very strong year, but I hate saying that because I'm too close to it now. I will know it better by the end of the show," says Fabio Piras, director of CSM's MA Fashion course.

Piras agrees that today's uncertain political climate has played a role in his students' work, though is quick to note that the show's narrative is less about making a political statement than it is about a dystopian universe. "It's escapism, a sense of a new future and very much about going back to the essence, the shape, the rigour about what a designer should be. There's a total sense of romanticism that's almost melancholic," he explains.

"In the first part of the show, with designers like Markus Wernitznig, there's a sense around 'If I belong to the present and need to perform, I will make my voice be heard no matter what.' You go further on and the point of view is still there but it becomes much more of a fantasy. At the end it's really about addressing what fashion is, in many ways. It's about what are we going to do after Trump. Maybe it's about not addressing fashion as a global enterprise but a local enterprise, which I don't think is negative at all," says Piras.

In anticipation of tonight's MA Fashion show, BoF takes an exclusive look inside CSM's class of 2017 to reveal six of this year's most promising new design talents.

For Leicester-born menswear designer Joshua Walters, fashion in its purest form should always be about the consumer and no other references should be used when creating a garment. "In using references, you're culturing the product in a way," he says. "Making products free of culture feels good in a world where everybody is so secluded." 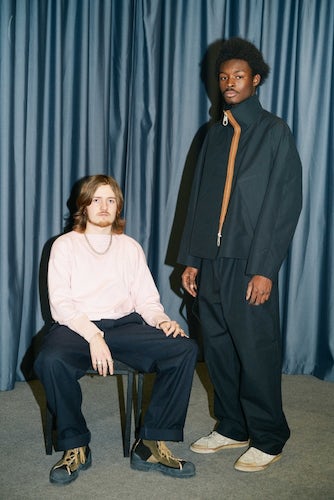 It is an approach that has won Walters' label, 3Mån, Dover Street Market as a stockist. It has been carried in the London and Japan stores since 2014.

Walters says his work is more about subtraction than it is about embracing minimalism. His graduate collection is built around a utopian ideal of non-gender and non-fashion and each ensemble is a single colour or fabric. "In a way, I've looked at everything and I try to take everything out. The thought process behind the design is intellectual and considered, but it shouldn't be exclusive. Everybody should be able to understand and use it," he says.

As demand for his label continues to grow, Walters plans to continue working on his line after he graduates. "Ideally, I would need some investment. Up until now I've been making all of the garments myself and I would really like to explore different factories in the future to get the balance for production right."

It was an exchange programme that led Austrian-born Markus Wernitznig to London at the age of 15. He fell in love with the city and three years later started his BA at CSM, during which he interned for brands including Céline, Tom Ford and Balenciaga. 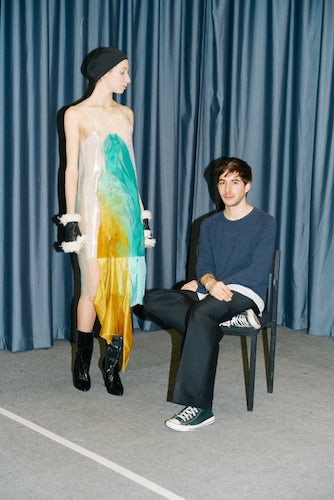 "I did a whole spectrum of everything," says Wernitznig, now 25. "At Céline, which was my first internship at a big house, I worked in their 3D studio. I came back and already grew so much in skills. At Tom Ford it was a totally different style and at Balenciaga I did everything from sketch updates and fittings to communicating with the atelier and working on 3D pieces."

On finishing his BA, Wernitznig started working for Alexander McQueen. "I was meant to be there longer, but working, you miss the playground to develop," he says on of his decision to return to CSM for his MA.

For his graduate collection, Wernitznig takes inspiration from the 1964 film, "L'Enfer" by Henri-Georges Glouzot, a masterpiece that was never completed. "A couple of years ago they found fragments of the movie, which became a documentary. So it's the making of a film that was never made," he explains.

Glouzot's experimental film-making is explored throughout the collection, which includes colourful plastic garments with encapsulated degradé chiffon and shearling showpieces, sustainably sourced from Bologna, Italy. "It's really not about referencing anybody or a period in time as it is about the now and the future."

Wernitznig is eager to start his own label but adds that he would not mind working for other people either. "Both would be fine, I'd be happy to go to Paris, New York or elsewhere."

"On the BA course when we did projects we would always see that our aesthetics were similar," says English MA graduate Laura Lowena of her Bulgarian-American business partner Emma Chopova. "Our work always reflects the fact that two people are working together in a way that we work with two themes that always juxtapose each other," adds Chopova. 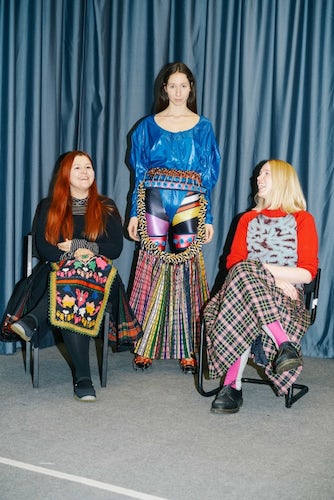 The duo both went on to intern at Diane von Furstenberg, then Lowena went on to intern under Lucas Ossendrijver at Lanvin where she excelled in detailing and learnt about tailoring. A brief stint at Alexander McQueen followed. Meanwhile, Chopova interned at John Galliano, before returning to London for a placement at Vivienne Westwood.

"At CSM we've tried everything, like being very conceptual and indirect, but we've found out that for us it works to be direct with what we like and what we want to do with it," Chopova notes. Without the need to unnecessarily contextualise their work, the pair's graduate collection draws inspiration from two straightforward, yet distinctly different references: traditional Bulgarian folklore and 1980s rock-climbing.

"We wanted to modernise the folk part by putting it into something really synthetic like lycra or nylon," says Chapova. "We didn't want to produce something that looked like anything folky or rock climbing, but something new on its own," Lowena adds.

After graduating, Lowena and Chopova plan to start their own label. "I come from a business background, so we're very focused on the business side as well. It's very hard to start your own label but we're super focused on the goal," says Chopova.

"I'm really passionate about textile and experimenting with new ways to develop different fabrics," says 25-year old Brit Oliver Thame, whose fascination for patterns and texture was seeded during his BA in fashion print. 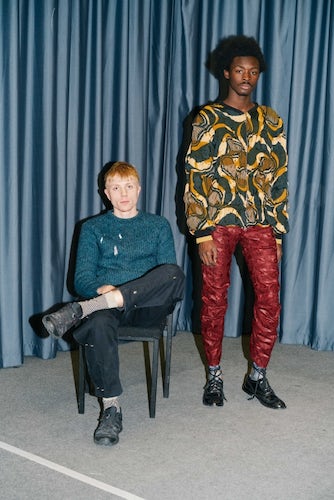 During his placement year, he interned for three months at Christian Dior Couture, where he developed textiles for the house's Spring/Summer 2014 collection. "They give you a book of research and a lot of fabrics," Thame says. "I worked very closely with the print team while learning a lot of processes in terms of making textiles and embroidery. It was very free and a lot of fun."

Thame also worked with John Galliano before the designer's appointment as creative director at Maison Margiela in October 2014. "It was four of us throughout the year. We would go to flea markets and build up stories. It was a lot of research, draping on a stand and bits of design," says Thame.

His interest in heavily textured and relaxed-fitted silhouettes are evident in his graduate collection, for which his starting point was Jean-Stéphane Sauvaire's 2009 film, Johnny Mad Dog that depicts a small group of young rebel soldiers dressed in outlandish outfits ranging from wedding dresses to butterfly wings. "They believe that becoming these alter-egos acted as a sort of protection."

The collection showcases a number of things Thame developed over the MA course and draws in a variety of mismatched prints, including a sporty houndstooth from a 1980s football jersey paired with a more classic heritage fabric.

"It's about exploring interactions," says York-born Laura Newton. "The thing that interests me about knitwear is the way it's crafted from nothing. It's from a single thread that gives you complete freedom." 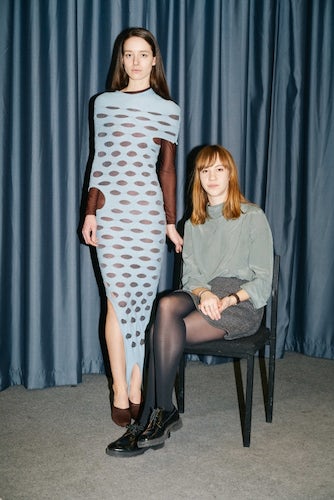 Newton started interning at Craig Green early in her BA. At the London-based label she worked on the jumpers from its acclaimed second season, followed by stints at J.W. Anderson and Proenza Schouler. After that, the 24-year old worked on Agi & Sam's Spring/Summer 2015 collection, where she expanded the brand's knitwear portfolio.

"I think all my experiences of knit built up to this point where I wanted to explore the way fabrics interact with the body and for me it's about exposure and moments of tension and release," Newton explains, referring to her graduate collection, which includes garments created from cotton, viscose and lycra that she sourced from Manchester and Florence. "[The collection] is a nice balance between hand-engineered and modern techniques, it's really about how we wear things."

Newton's work is not limited to fashion design. Her short-term plans include a small exhibition. "What I love doing is making things. I share a small studio with a group of friends, some of which are textile artists, and we're interested in exploring things that aren't fashion, like stretching the fabrics over different objects. [My work] should be wearable but not limited to the conventions of making clothes," she says.

Hailing from Norfolk, Robert Wallace, 24, completed his BA in womenswear before switching to menswear for his MA. "At the end of my BA I was interested to try my collection on a man and see if it worked," he says. "For the [BA] course I collaborated with a textile student from the year above and the guy I worked with was a menswear student. Since then I've only been doing menswear." 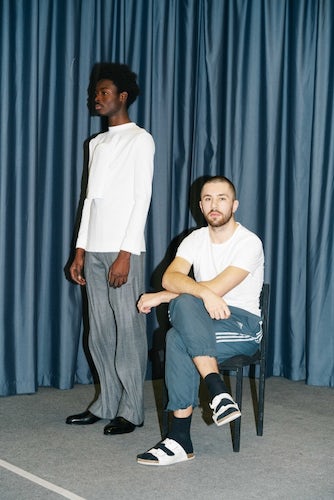 During his BA, Wallace interned at J.W. Anderson in London, followed by Marchesa in New York, John Galliano in Paris and Copenhagen-based designer Freya Dalsjø — all of which were in womenswear. "Because [Freja Dalsjø] was a smaller team and I was very involved, it was probably the best place I went to," he says.

Intrigued by product design, Wallace's work takes inspiration from 1920s and 1930s furniture and modernist architects Jean Prouvé and Marcel Breuer. "I guess the clothing wasn't directly inspired by them but that's how I imagined the clothing to be set in that space," he explains.

"I have a photo of Marcel Breuer in a beige suit and it just didn't reflect what they meant. Part of the reason for me doing this is to apply their reasoning," says Wallace, whose graduate collection ranges from trousers made from wool and the boning from a corset to t-shirts that can be worn both short and long-sleeved.

Sceptical about working for a big fashion house, like some fellow graduates, Wallace aims to start his own label if the opportunity presents itself in the future. "Other people's experiences working at companies don't sound that appealing," he says. "If I would work for another company it would be in product design as what you're creating is maybe more worthwhile."

How to Get Into the Best Fashion Schools