Despite the rise of nationalism, isolationist rhetoric and reshoring, globalisation will not stall in 2018.

LONDON, United Kingdom — In this new world, globalisation can seem like a dirty word. Across the globe we are seeing increasingly nationalistic rhetoric in public debate, leading to the protectionist stance taken by many countries with initiatives such as “Made in America” and “Made in China 2025.”

One practical consequence is a shift in global trade alliances, which are altering trade dynamics. For example, the US withdrawal from the Trans-Pacific Partnership (TPP) is likely to impact both imports and exports of fashion products in the US (with widespread consequences given that the US is currently the largest importer of apparel globally). The ramifications of this move, combined with rising labour costs in many traditional manufacturing hubs and technology improvements, could make re-shoring more commercially viable for fashion companies in the US, as identified in McKinsey’s recent Apparel CPO Survey report. In the same report, more than one-third of surveyed chief purchasing officers said they expect their companies to make increased use of re-shoring. At the same time, consumption has shifted towards the manufacturing centres of the world, local brands and retailers in China and India are growing, and with that the local-for-local production base as well as regional trade networks.

But reports of declining globalisation are much exaggerated. Even with the apparent increase in isolationist behaviour in some countries, globalisation is not stalling. On the contrary, we are entering a new phase of globalisation, driven by digital connectivity and the ow of data, and this will lead to much greater global connectedness, not less. Cross-border bandwidth has risen approximately 80 times since 2005, and over the course of a decade, data flows have raised world GDP by more than 10 percent. Data flows now account for a larger share of the impact on GDP than the global trade in goods. This trend is expected to continue, with cross-border bandwidth projected to grow by another five times in the next four years. New forms of connectivity will emerge. For example, 40 percent of global devices and connections in 2019 will be machine-to-machine, according to a Cisco estimate. 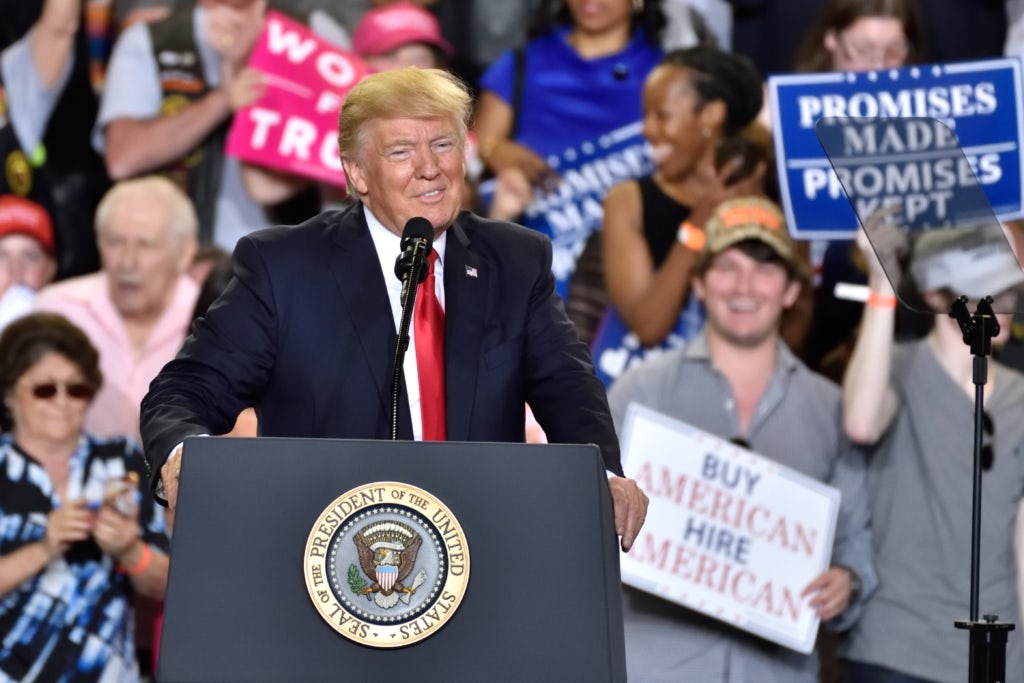 President Donald Trump during his celebration of 100 days in office | Source: Shutterstock

A significant portion of this global ow of data is intracompany traffic. This includes making transactions, tracking information, and communicating internally and with suppliers and service providers. For many years, large, established companies enjoyed cost savings from building their own systems to deal with these cross-border interactions, which were costly for smaller companies. But the recent exponential rise in connectivity has brought an array of new ways to interact across borders that are inexpensive and open to all kinds of businesses, from operating systems to marketplaces and social networks.

Individuals, too, are playing an important role in this new digital globalisation. More than 900 million people have international connections on social media, and consumers are estimated to spend $1 trillion on cross-border e-commerce by 2020. The largest online ecosystems, such as Facebook, Youtube, WeChat and Whatsapp, have built user bases the size of country populations: between 2013 and 2015 the number of SMEs on Facebook reached about 60 million. The emergence of these ecosystems has not only improved the transparency and efficiency of global markets but has also democratised global connectivity by reducing the costs of international communication and transactions.

This growing global connectedness is driving up competitive intensity in the fashion industry. The advantage that established companies enjoyed as a result of their assets — from physical distribution infrastructure to proprietary systems for cross-border communication — is likely to diminish. In 2018, more fashion companies will take advantage of opportunities to enter new markets, as connectivity allows for access to customers worldwide through own or third-party platforms. Companies enter new markets without establishing a significant physical presence.

Connectivity allows for access to customers worldwide through own or third-party platforms.

The ramifications of global connectivity are especially important for younger fashion players, who now have the potential of reaching global scale and becoming “micro-multinationals”: in a recent McKinsey Global Institute survey, 86 percent of startups state they are engaged in at least one cross-border activity. One noteworthy example is Matchesfashion.com, which started as a small chain of local neighbourhood boutiques in London and has since expanded to 190 countries through online channels. Manufacturing companies from Asia develop brands and reach global consumers directly. No longer sheltered by traditional advantages, established fashion players should expect increasing competition from all corners of the world, and from a broader array of companies as startups go head-to-head with incumbents — all of whom are enabled by virtual connections.

Established companies that operate across markets stand to benefit from growing connectivity as well. They can simplify existing global operations and internal communications through virtual connectivity and improved systems for accessing information in real-time. Incumbents can take advantage of digital ecosystems in the same way as smaller companies, gaining access to customers worldwide — especially those in new segments or in fast-growth markets. New digital collaboration models between fashion companies and their foreign suppliers and service providers can improve transparency and efficiency. Transparency, traceability and trust throughout the value chain can be further enabled by blockchain technology. Companies will be able to tap into global ideas, trends, and talent pools faster and more efficiently, from crowdsourcing innovation ideas online, to virtually connecting with creative or other talent from the other side of the globe.