As she opens her latest store on London's Regent Street, Tory Burch tells Tim Blanks about taking her brand into the future with a community-focused approach to retail. 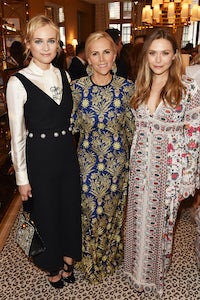 As she opens her latest store on London's Regent Street, Tory Burch tells Tim Blanks about taking her brand into the future with a community-focused approach to retail.

Tory Burch with Diane Kruger and Elizabeth Olsen at the opening of her Regent Street store on Monday | Photo: Dave Benett/Getty Images for Tory Burch
Share
Comment
By Tim Blanks May 23, 2017 05:28

LONDON, United Kingdom — “Every CEO I’ve ever spoken to said there’d be an inflection point at ten years.” Tory Burch is reviewing the situation over her jasmine tea at Claridge’s.“Maybe three years ago, we realised we’d hit it. I was so proud of what we’d done in ten years, but the scale of the company was just not feasible for me. If we were going to go into the future, we had to do a pivot, to restructure and look at things differently. I was always running the business and the creative. I needed more help, so I could focus on different things as well. What I’m leading with is a ‘less is more’ strategy: less product, but product with more integrity, less stores, but the right ones.”

Burch is in London to open her latest one, on Regent Street. It’s her second in the city, just blocks away from her other outlet, on New Bond Street, but she feels it’s a very different proposition. “I’m thinking a lot about retail and what our name really means,” she says.

“When we hit that inflection point of ten years, I was thinking about innovation and technology and what that means being a retail concept. Because our business was a retail concept from the very beginning. What we’ve been finding is that traffic is down but numbers aren’t. People are going into stores knowing exactly what they want. In and out. There’s not really that browsing anymore. So experience is something I want to integrate into all our stores. I always wanted to make our shops a community, a place for people to go, where they could sit and read a book, have a beer. Our challenge is to create a community on Regent Street.”

She talks about the “cluster concept” of building a brand, “picking markets that are meaningful”. And the UK has most definitely proved to be one of those. Burch doesn’t know why it’s worked as well here as it has. “Tourism I get, but I’m really happy that women here seem to find things they can put their own spin on.” That’s no humble brag. By her own admission, she has zero ego. “I take things in stride, I’m always appreciative,” she says, “because I never imagined having a company like this.” She insists she still pinches herself that she’s CEO of a billion dollar brand, one that bears her own name to boot.

Even that kind of happened by default. Burch’s original idea was to revive Jax, the label her mother wore in the '60s and '70s. But when she cold-called company founder Sally Hansen to tell her how much she’d love to re-do Jax, she got a resounding ‘No!’ Plan B was her own label. “I didn’t want to use my own name. I tried ten others that were all taken, then settled on Tory by TRB [Robinson is her maiden name]. Eighteen months later, Kenny Jay Lane takes me out for dinner and tells me it’s the worst name, and people are calling it Tory Burch. ‘For God’s sake, change it.’ And we did, because he was right.”

I always wanted to make our shops a community, a place for people to go, where they could sit and read a book, have a beer.

That concession to common sense didn’t affect the way she views the challenge of balancing her personal and professional lives. It’s an ongoing thing, tested to the limit by Burch’s very public divorce. I suggest that may have made her more “real” in the eyes of her clientele. “This whole idea of perfection is so absurd to me,” she quickly counters. “No one ‘has it all.’ You just do your best. That’s how I look at it.”

Still, I’ve always thought a big part of Burch’s global appeal was how easy it was to identify her with her product. She’s been professional figurehead and personal embodiment. “When I think of our company and why it’s resonated globally, I’m inspired by so many places around the world. Intellectual curiosity is really important to me. And aesthetic curiosity.” She makes me think of Gerald and Sara Murphy. “They remind me a little of my parents,” Burch says. In other words, cultured, curious Americans who found the best in everything and everywhere. “I’m fascinated with pictures of my parents,” she continues. “Whatever was going on in the world at the time, their photos from the '60s and '70s look so effortless, so beautiful, so pure. They do take you away, make you dream.”

The Murphys were memorialised in the book “Living Well is the Best Revenge,” an irresistible notion which finds a match in Burch’s business. “How do you design beautiful things that don’t cost a fortune, that resonate in a timeless way, that aren’t just about trend?” was the question she originally asked herself. There was an ulterior motive. If she could make enough money, she’d be able to underwrite her real ambition: to fund a foundation. A week ago, the Tory Burch Foundation awarded entrepreneur Paris Sabo with a $100,000 grant investment for her business manufacturing natural and organic personal-care products. Sabo was one of 30 finalists who were chosen from more than 800 women entrepreneurs.

The Foundation’s multifocal commitment to empowering women entrepreneurs is as shaped by Burch’s personal experiences as her product. “We talk a lot with them about how they have to be their own best advocates. I bought into a harmful stereotype 12 years ago when a journalist was calling me ambitious and I shied away. Why is ambition celebrated in men and crass in women? With the Foundation, we can be advocates for women and help them be advocates for themselves, having a voice, speaking up, in whatever they do, whether it’s in business or being a stay-at-home mom.”

Burch is a political animal. Again, it’s personal, and, again, it’s problematic for her. “You have your views on life, but you have to strike a balance in business because you have responsibilities to partners. You can’t be an advocate for causes if it causes turmoil and negativity.” During the US election, Burch challenged other CEOs to give employees time off to vote without docking their pay. Her initiative met with some resistance. “It was perceived as more Democratic for some reason,” she notes wryly. “I wasn’t saying who to vote for, I was just saying go vote.”

But her optimism remains undented, even by the current turn of political events in the US, because women’s rights is an issue which transcends party politics. “I was so amazed by the Women’s March. It was so much bigger than any administration. Women’s rights is a given, not a favour. There shouldn’t even be a debate. The people who understand this are fathers about their daughters… though not necessarily about their wives, interestingly.”

Still, there’s no doubt that these are trying times for optimists. “What’s important is to get people engaged so they’re not talking about despair. You can’t stagnate with frustration and anger. Otherwise, what’s the point?” Burch is a firm believer in action. As cool and imperturbable as she seems, she’s passionate. “I care so much about people, about issues.” How far would she be prepared to take that? Could a future inflection point mean her own move into politics? Long pause. “I would never say never.”

Hail to the chief.

A Woman's Work: How Women Can Get Ahead in Fashion