What Tory Burch Did Next

The designer serves up her strategy behind the much anticipated activewear label, Tory Sport.

What Tory Burch Did Next

The designer serves up her strategy behind the much anticipated activewear label, Tory Sport.

NEW YORK, United States — “Athleisure” may be a widely loathed term, but it’s also big business. Global sales of activewear hit $41.3 billion in the 12 months ending July 2015, up 17 percent from the previous year, according to market research firm NPD. And while many fashion labels have rushed to introduce their own performance-driven collections, perhaps none has been as greatly anticipated as Tory Sport, designer Tory Burch’s retro-tinged range, offering everything from leggings and lightweight anoraks to tennis skirts and track pants.

Burch chose New York Fashion Week to introduce the goods, priced just above competitors like Lululemon, at the site of her first-ever boutique on Elizabeth Street in the city’s NoLita neighbourhood. The space has been transformed into a Tory Sport pop up shop designed in partnership with installation artist Kate McCollough. Portraits depicting women wearing the collection, by the Instagram-famous artist Kelly Marie Beeman, line the walls, while a vending machine filled with vintage magazines and Tory Sport-branded tennis balls add a sense of novelty. 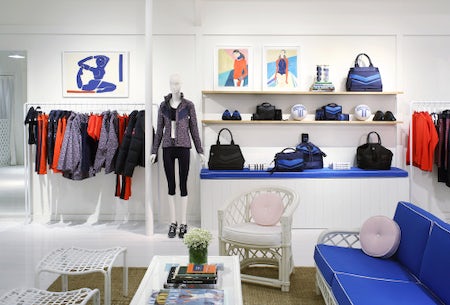 “It was a bit tired after 11 years, I gutted the whole thing,” said Burch, who greeted well-wishers as they passed by the space. The event marked the public unveiling of what has been a three-year process for the designer and executive, who considers the collection its own start-up venture. Here, Burch shares the pillars of the strategy behind Tory Sport with BoF.

Burch hates the term, choosing to name the collection’s off-the-court offerings — which include 1970s-inspired tech-knit mock turtlenecks and skirts — “Coming and Going” instead. “There’s a shift in the way women are dressing,” she said, wearing a rugby-striped skirt and v-neck sweater from the line, paired with sculptural Loewe heels. “[The activewear market] might be saturated on some levels, but I feel we have a really different perspective. We’re taking the concept of that market and making it about quality and fabrics and technical fit and design. It’s also about pairing real function and style, and I think that’s not out there at the moment in a significant, fully comprehensive way.”

Build a direct relationship with the consumer. 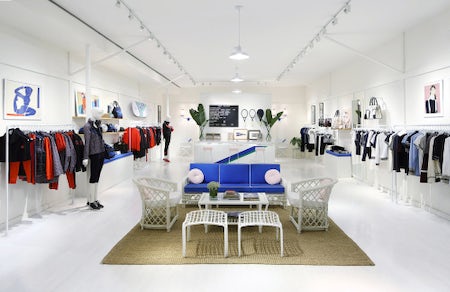 Burch launched her namesake collection in 2004 with a small boutique on Elizabeth Street. While wholesale is a likely part of the long-term strategy for Tory Sport, the line is currently only available through Burch’s own direct-to-consumer channels, including online at Torysport.com. “I don’t want it to be everywhere in the beginning,” she said. “I want to learn the space and I want to protect the brand.” For now, there will be two collections designed each year, with deliveries every six weeks.

Burch spent three years perfecting the collection, ensuring the right team was in place and the quality was at the level she desired. “It was hard,” she admitted. “There were a lot of starts and stops. We needed to be working with the right factories.” The result is technically proficient pieces — made with sweat-wicking and water-repellent fabrics — and equal attention has been paid to the aesthetic. “I wanted the functionality to be a given, but I really wanted integrity of design,” she said. “A lot of the technical details and properties are there, but when I looked at the sport market, it’s all about the zipper. It just seemed a bit too much.”

Make the brand a peer to the main collection.

While Tory Sport is certainly linked to Burch’s main collection, it has a different logo, which was designed in-house, and has a tweaked aesthetic, inspired in part by Swedish tennis player Björn Borg and The Royal Tenenbaums. “I never wanted this to be dilutive to the main brand,” she said. “I don’t really think second lines work.”