MUMBAI, India — “I didn’t know about Anjali Lama even being a transgender. I just cast her for my show because I loved her,” said Amit Aggarwal, one of India’s brightest designers, after his show earlier this month at Lakme Fashion Week held in Mumbai. “But it was a proud moment for me to see her wear my clothes. It expanded the language of my own creativity.”

For another Indian designer, Soumodeep Dutta, Anjali Lama’s presence at fashion week felt like he struck gold. His theme — the blurring of lines in the duality of nature — manifested itself perfectly when he discovered a transgender model would be walking in his show. “I believe when opposites meet, Hindu mythology celebrates this in the concept of “ardhanarishvara” (half-man, half-woman). Anjali breaks all norms. I was honoured to have her in my show,” said Dutta, who took part in the ‘Gen Next’ group.

As the first transgender model to walk the ramp in India, Anjali Lama has created a huge flutter in the fashion industry and the country at large. She was in such demand with press commitments, photo-ops, rehearsals and fittings that it was nearly impossible to get an interview with her. So popular was Lama in fact that she ended up being booked for more than a dozen runway shows during the week including veteran designer Tarun Tahiliani, where she walked alongside Bollywood stars and celebrities like Padma Lakshmi. 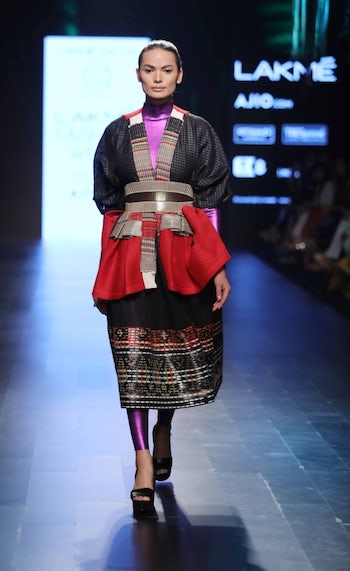 “Life is what we make of it and the walls we erect to segregate or discriminate are reflective of the big walls in our own minds,” said Tahiliani. “No one has the right to strip anyone’s self-respect and a fair chance of a livelihood.”

This wasn’t the first such casting in India. Late last year, established textile designers from Lakme Fashion Week 2016 draped four classical transgender dance artists in contemporary handloom saris. Organisers said that the project was to give a “clear and loud message that fashion is diverse and inclusive of all genders”. While conducting a photo shoot with the transgender dancers, Gautam Vazirani, the fashion curator at IMG Reliance, explained why.

“As a person from the LGBT community myself, I see transgenders as people who have been able to create their own identity despite being so marginalised. This Lakme Fashion Week initiative was to celebrate that universal spirit that could motivate more people who are afraid to follow their heart, to come out. Anjali is one such example and we hope there will be more,” said Vazirani, who works for the event management firm behind the fashion week.

For her part, Anjali Lama is quiet and introspective about the overwhelming attention in her life. “In my village, nobody knew anything about fashion or modelling,” she confides, explaining that she was born to a farming village of Nuwakot in Nepal.

When she came under the wings of the Blue Diamond Society, an LGBT rights organisation in Nepal’s capital Kathmandu, Lama swiftly affirmed her gender identity before embarking on a modelling career in neighbouring India.

“I know that I have to compete hard and work from my heart to be at par with beautiful, seasoned models [but] my work should prove my value, not my sexuality [or gender identity],” said Anjali in between standing-room-only shows.

While India’s transgender rights movement has made significant progress in recent years, the community continues to face widespread discrimination and challenges in society. Yet India has been at the forefront of a somewhat healthy dialogue on inclusivity. In 2014, the Indian Supreme Court passed a landmark judgement giving transgender citizens the constitutional guarantee to basic rights including personal liberty, dignity, education and empowerment.

“I didn’t realise that our fashion industry was so forward thinking to allow such a big issue to be addressed via fashion,” said Navonil Das, from the designer duo Dev r Nil. “I love the idea of blurring gender boundaries but the reality is, for both of us who are outspoken advocates of LGBTQI rights, we still have miles to go. We cannot be a forward-thinking society until we change Section 377 of the Indian law that criminalises homosexual acts.”

LGBT rights in India are perplexing and ambiguous. While the country’s Supreme Court ruled that "it is the right of every human being to choose their gender", homosexuality under Section 377 of the Indian Penal Code harks back to an 1860 British colonial era law. Though it does not criminalise homosexuality itself, it does criminalise homosexual “acts" because they are interpreted to be “against the order of nature”.

Parmesh Shahani, head of the Godrej Culture Lab and author of ‘Gay Bombay: Globalization, Love and (Be)longing in Contemporary India’, suggests that this ostensibly prohibits homosexuality regardless of the letter of the law. “[So] being gay is criminal [but] being transgender isn’t. This is a very illogical situation. I find it to be both silly and tragic for our entire LGBT population. You’re telling someone that their gender is fluid but their sexuality has to be regulated.”

The most powerful tool of fashion is visibility; and with this comes advocacy.

Even the recent third gender bill proposed to the Indian Parliament has come under criticism from trans activists like Abhina Aher. While she concedes that the bill is a good step forward, she believes it is flawed. “The government fails to understand the complexities around trans people. For instance, the recent government bill tries to project all trans people as intersex. The community rejects the recent bill the way it is right now,” said Aher.

Clearly there is much that needs to be addressed and corrected. Like anywhere in the world, India has a range of identities within the transgender community; and in the latest round, the Court finally broke the primary binary gender construct of ‘man’ and ‘woman’ that pervaded Indian law thus far. The most prominent of the trans identities in India are the “hijras” (eunuchs, intersex or transgender). Often called the ‘third gender’, they are estimated to have a population of between half a million to two million individuals.

On any given day, hijras from both Hindu and Muslim communities wear saris or salwaar kameez (tunic-trousers), makeup, long hair and jewellery very much like cisgender Indian women but their lives are complex to say the least. Many hijra do not undergo gender reassignment surgery. Some have traditionally made a living by bestowing blessings at heterosexual weddings and before or during birth.

In the last two decades, there have been groundbreaking milestones from within this community. Trans women like Shabnam Bano, Kamala Kinnar (a street-play artist and also a folk dance performer who earlier earned her living by singing and dancing on trains) and Kamala Jaan became the first few transgender individuals to be elected to public office in India.

They used their positions in the government to speak out against discrimination of hijras as well as to raise awareness on HIV/AIDS. Shabnam Bano especially inspired a lot of hijras in India to take up politics and participate in 'mainstream activities' in India, giving up their traditional roles as dancers, prostitutes, and beggars. Even with this forward march, after a few years into their governmental jobs, their roles were declared null and void because they were not considered ‘real’ women. 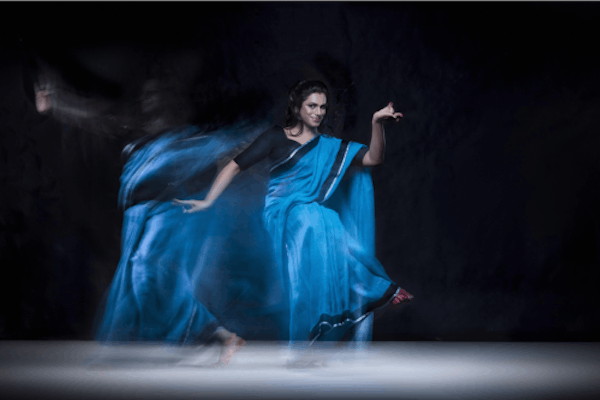 Nonetheless, this paved the way for others to follow in their footsteps and in new disciplines. Kalki Subramaniam, became the first transgender entrepreneur, writer, actor and activist. Padmini Prakash, a vocal artist, trained Indian classical dancer and Miss Transgender of India, read out her first headline bulletins on TV becoming the first transgender news anchor in India. Manabi Bandyopadhyay, author of a bestselling novel ‘Endless Bondage’ about hijras, became principal of a women’s college in West Bengal.

One of the most vociferous champions of the cause has been Laxmi Narayan Tripathi a transgender rights activist, Hindi film actress and classical dancer in Mumbai. She became the first transgender person to represent Asia Pacific in the UN in 2008. And there is the indomitable Abheena Aher, who works relentlessly with Alliance India on sexuality, gender, health and human rights issues for almost two decades and currently also serves as chair of the Asia Pacific Transgender Network.

Fashion as a Way to Empower

Clearly, clothes and style have a crucial role in the politics and power play of gender. In India, the third gender’s seemingly benign tryst with fashion, begs deeper scrutiny about what impact the industry can have on their quest for inclusivity. The fact that, in India, hijras unabashedly embrace womanhood via their sartorial choices everyday — often despite jeers and taunts — makes clothes a powerful tool for gender expression like no other, because it pervades their everyday lives.

Fashion, whether in India or abroad, is beginning to understand this — however ambiguously. Global popular culture has played a pivotal role in opening doors and minds. Laverne Cox on the cover of Time, the TV series Transparent and ‘Call Me Caitlyn’ were paradigm shifting milestones. But fashion has played a big role too. Casting Hari Nef in Gucci seems normal now but when Riccardo Tisci cast Lea T in the Fall 2010 Givenchy campaign, it was seen as scandalous by some. Now the hottest brands — Vetements, Eckhaus Latta, Hood By Air and J.W. Anderson among others — make it a routine practice to blur gender in the choice of models and in the representation of a non-binary gender aesthetic.

It is no wonder that Rudrani Chettri, founder of Delhi-based LGBT charity Mitr Trust, set up India's first transgender modelling agency. Tired of seeing many young, beautiful transgenders feeling ugly about themselves from a young age, she decided to try to correct it. “I was one of them and there was no such option open to me when I was young,” said Chettri. “It's also a desperate desire amongst us to be seen and to be accepted into mainstream society and to get jobs like everyone else. I hope this creates a spark in young transgenders to follow their dreams." 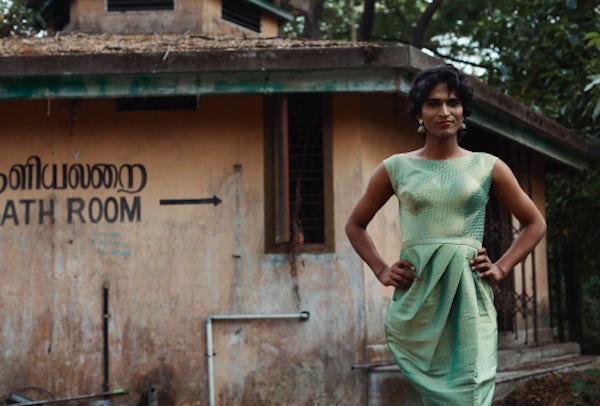 In December 2016, India’s first transgender school opened in Kerala. The photographer and Indophile Amanda Fordyce took to the streets of Kochi and conducted a guerrilla-style photo shoot with the local hijras. Styled by Annah Chakola in rustling silks in bright colours and silhouetted against feminised bodies, it is easy to see why the hijra community are the most visual sub-set of trans India.

Clothing for the trans community in India is no doubt one of the most visual and visceral expressions of their acceptance and their transition to womanhood. On the surface, their dazzling clothes signify their joy for life, yes. But unravel the drape and their clothes may in fact be hiding their despair over the injustices they continue to face in a gender-rigid society. The most powerful tool of fashion is visibility; and with this comes advocacy.

On the completion of her catwalk debut in Mumbai, Anjali Lama paused to reflect on her future. “My immediate goal is to learn English well enough to be able to narrate my personal story of transition into a transgendered woman, not only in India and Nepal, but all over the world,” she said.

“While people aren’t quite aware of all the challenges facing transgenders, by accepting me, fashion is putting a spotlight on our collective struggle for equality. It’s this journey that will inspire others like me to make choices to love and live with dignity.”