Until not too long ago, Bouchra Jarrar’s razor-sharp tailoring was considered one of the best-kept secrets of French fashion. Now her business is gathering steam.

PARIS, France — “I don’t create to exist, I create so that my business works,” the eminently practical, focused and reserved Bouchra Jarrar told BoF. “To run a couture house means I have to oversee everything. I like to be involved in every aspect — technical as well as commercial. It helps me balance the creative side of my work, because I am always responding to real-world demand.

Jarrar, who worked closely with Nicolas Ghesquière at Balenciaga, presents her collections during Paris haute couture Week. But her work straddles two worlds: couture — garments custom-made for private clients — and the highest quality, precisely tailored, menswear-inflected ready-to-wear. If Nan Kempner were alive, she would undoubtedly be a Jarrar client. 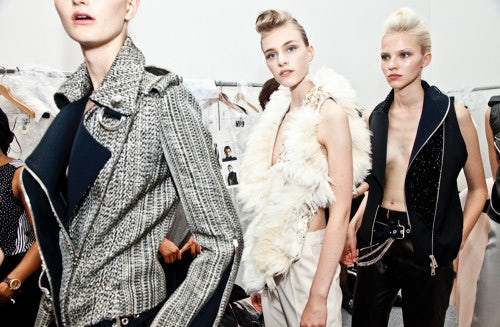 There has been notable buzz around Jarrar from the moment she debuted her signature label in January of 2010. The American press, in particular, was supportive from the start. Suzy Menkes, too, has been a champion of the designer for several seasons. But for the most part, Jarrar has remained under the radar.

Part of it has to do with the fact that her clothes — impeccably cut trousers, elegant suits, sharp coats, perfect little biker jackets and her impossibly chic signature vests, all meticulously embellished and artfully constructed — are highly restrained and understated, almost to a fault, especially when compared to the kind of splashy fashion that makes headlines today. Moreover, at 43, Jarrar does not fit the mould of the wild-mannered rookie the industry seems to love.

But wholesale orders picked up significantly in 2013 — evidence that Jarrar’s discreet, slow approach is starting to pay off — and the designer now appears poised to make the transition from being one of the best-kept secrets of French fashion and a darling of a small circle of fashion insiders to an internationally recognised designer with serious prospects.

Today, the label is currently available in 55 stores around the world, including influential retailers like Ikram, Bergdorf Goodman, 10 Corso Como and Harvey Nichols. Significantly, at some of these stores, Bouchra Jarrar hangs next to top-tier luxury labels like Saint Laurent, Céline and Azzedine Alaïa.

What took so long?

Jarrar, who was raised in Cannes by parents from the ancient Moroccan city of Fez, always knew she loved clothes, often choosing to sew while other children were playing. But she didn’t realise that designing clothes for a living was a possibility until, as a teenager, she saw an Yves Saint Laurent runway show on television. “When I saw that Yves Saint Laurent show on TV, I understood that that which I loved the most could be my profession.”

Jarrar came to Paris to train at the Duperré School of Applied Arts. After graduating, she designed jewellery for Jean Paul Gaultier before landing a job at Balenciaga, which at the time was languishing. Jarrar was in her mid-twenties when newly appointed head designer Nicolas Ghesquière asked her to be his studio director. “I said, ‘Oui, I can,’” she recalled, embarking, alongside Ghesquière, on what would be one of the most spectacular reinventions in fashion history: transforming Balenciaga from a dormant French womenswear label into the world’s most forward-thinking luxury fashion house.

“At Balenciaga, I was in charge of both the studio and atelier teams, meaning I was helping [Ghesquière] create the collections, but also ensuring their realisation. And during the 10 years [that I was at Balenciaga], I completely assimilated how a fashion house functions, with all its different departments.”

In 2006, after suffering a setback in her family life, Jarrar decided she was ready to leave. “I realised I wanted to be happy and that there were things I still wanted to learn.” After quitting Balenciaga, Jarrar had immediate offers to take the creative reins at a number of luxury houses, all of which she declined.

But after taking six months off, followed by a brief and mismatched stint at Jean-Louis Scherrer, Jarrar became the head of couture at Christian Lacroix, helping the legendary couturier produce his final collection before losing his house to insolvency in 2009. “After that, I had seen first-hand how a house was born out of almost nothing [Balenciaga], and how another one died after once having been everything [Lacroix],” recalled Jarrar. “I told myself, my education is now complete. I was ready to start my own story, and decided to launch my brand and take things step by step, placing quality at the center, surrounded by an efficient, functioning company.”

“During the last four years, I didn’t want to rush. I didn’t want to accept just any partner. I could have accepted a creative director post at a house to finance my own label, but I chose not to do that. Instead, I wanted to concentrate on my business and set into place a very strong organisation in terms of production and delivery. And I needed to establish my signature first — the codes and silhouette my label stands for.”

In 2011, Jarrar took on a small investment by French venture capital firm Mode et Finance, allowing her to create her first salaried staff positions (she now has 8 permanent employees).

But it wasn’t until last winter that Jarrar started to see real sales momentum, a shift she attributes to a pivotal decision to get specialised sales support in key international markets. “Commercially, things were a bit slow in the beginning. But last winter we started working with a [sales] agent for Russia and other eastern countries, as well as an agent for Japan — and that really made a difference. Ready-to-wear started growing enormously,” she said.

Jarrar’s new visibility can also be attributed to the success of her Autumn 2013 collection — dominated by creams, ivories and off-whites, a colour palette the designer reluctantly confessed is a reflection of her spirituality — which was unanimously praised. “The response to Fall 2013 has been formidable,” said Jarrar. “It’s really been game-changing for us.”

Growth is now a top priority for the designer, who hopes to soon find the right business partner to help her build upon the foundation she has built over the last four years. “I think we are in a privileged position. We have put in place an organisation that runs very efficiently, has zero debt and is in a unique position to grow,” said Jarrar, who declined to disclose the current size of the business, but emphasised the advantages of the company’s streamlined workflow, which she picked up at her previous employers and has implemented on a smaller scale at her own label.

“When I design, I am already thinking of production,” said Jarrar, who is known for always delivering to stores early. “I know exactly what fabric I am going to buy and how much I am going to need of it. It’s a shortcut that allows me to economise, so when I get to the production stage there is no waste.”

As for the future, Jarrar aims to scale her haute couture clients from about a dozen to over 50 in the next three years. By 2018, she plans to move to a larger headquarters and open flagships in Paris, New York and Tokyo. But the only issue is Jarrar doesn’t yet have the financial backing to leverage her talent and execute on this plan.

Jarrar’s obsessive — some would say unyielding — emphasis on quality and efficiency are the very foundations of her business. But these same traits, which seems to stem from her innate choosiness and insistence on doing things her own way, may ultimately prove both a help and a hindrance if they complicate the search for a perfect partner.