Today, Joseph Altuzarra is championed by fashion industry opinion-leaders Carine Roitfeld and Jenna Lyons, and stocked at some of the world’s best stores. BoF talks to the designer about how he built his brand and the breakthrough Fall 2012 collection that helped to crystallise his signature design template.

NEW YORK, United States — “It’s really not a race,” designer Joseph Altuzarra told BoF, sitting in his studio on New York’s Howard Street. “I don’t know if it’s a by-product of starting the company during a recession. But it’s really important to me to take the time to think about how we do things; to take the time to craft something that we’re really proud of and really feel like we’re on solid ground before building on top of it.”

The 30-year-old designer’s carefully plotted approach has paid off. In five short years, he has become one of the hottest new names in fashion. His sexy, body-conscious silhouettes are championed by industry opinion-leaders Carine Roitfeld and Jenna Lyons, as well as ultra-stylish actresses Cate Blanchett and Diane Kruger. 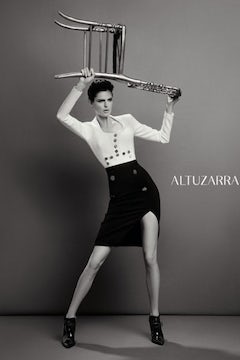 He has also been showered with high-profile prizes: just last month, Mr Altuzarra won the USA regional award for the International Woolmark prize, worth $100,000, while, earlier this year, the CFDA/Vogue Fashion Fund — another prize which he won in 2011 — provided him with the resources to realise his first ever advertising campaign, which appears in American Vogue’s September issue.

Altuzarra is stocked by all the right retailers — Barneys New York, Lane Crawford, Colette, Net-a-Porter and others — with over 50 doors in total. Revenues still hover under $10 million per year, so the company has plenty of room for growth: the brand has yet to launch handbags, a pre-Fall collection, e-commerce and a physical flagship, which the designer says are all on the horizon.

Born and raised in the very epicentre of fashion, Paris, by a Chinese-American mother and a French-Basque father, Joseph Altuzarra discovered his taste for high-impact power dressing, now his signature, early on. “I was obsessed with that whole Tom Ford era of Gucci and Saint Laurent,” he recalls. “He was sort of the Gianni Versace of my generation; he very much embodied all of the glamorous things fashion could offer and I found that very attractive when I was younger.”

But Altuzarra has no formal design training. He studied art history at Swarthmore College near Philadelphia, where he worked in the university costume shop and became interested in fashion through his school research on “how fashion advertising would use very classical art history references and iconography to suggest luxury.” Intrigued, Altuzarra applied for an internship at Marc Jacobs during his senior year at university and is still convinced that he was hired, not for his skill, but because “they had asked an intern to put all of the resumes alphabetically and I was probably at the top of the pile. I actually sort of know that this happened.”

At Jacobs’ then-tiny, three-person design studio, “I was doing the most unglamorous things, dyeing fabric and doing embroidery placements and developing little accessories and helping with lookbook shoots,” recalls Altuzarra. “But it was incredibly exciting, because Marc was a much smaller company back then and Marc was always there and incredibly hands-on.”

He went on to become a freelance designer at Proenza Schouler. “They were at the time really small, smaller than we [at Altuzarra] are now, and [designers Jack McCollough and Lazaro Hernandez] were incredibly generous with imparting knowledge.” Then, to combat what he calls his design “inferiority complex,” Altuzarra apprenticed with New York-based patternmaker Nicolas Caito, former head of the Rochas atelier. “I felt like I didn’t know enough technically because I had never been to fashion school... [Caito] was really the one who encouraged me to go back to Paris,” Altuzarra says. “He felt like Paris was a really good place for me to push myself creatively, to learn a different way of working, a different process... which is exactly what happened.”

Back in Paris, Altuzarra landed at Givenchy, as Riccardo Tisci’s first assistant. “If anyone’s ever been my mentor, creatively speaking, he was really it,” says Altuzarra. “I was very young when I started working with him and I didn’t have a lot of experience. He took a chance on me and really made a concerted effort to teach me a lot.”

Indeed, many of the lessons Altuzarra learned at Givenchy — “this idea of pushing the boundaries and taking risks” as well as “cutting and tailoring in a completely different way” — have directly influenced the formation of his own brand. “What is so admirable and what I really learned from [Riccardo] was that even when people didn’t get what he was doing — and it took a couple of years for people to come around — he was so steadfast in his vision and approach and so confident in his design language. That was a really, really big lesson for me.”

At 25 years old, Altuzarra returned to New York to launch his own collection with a very specific vision of his own — and a very specific woman — in mind. “I had become interested in the discrepancy between what I was seeing on the market and who was actually buying clothing,” Altuzarra explains. “[It was] a customer who wasn’t a girl, who was really a woman. And it’s really sort of epitomised by someone like Carine Roitfeld. The world we’re creating is a world that, on one side, has this seductiveness and this Frenchness — something a little subversive and very strict and with this sort of sensuality, as well,” he explains. “And then there’s an American side to it that’s very pragmatic and that has this sort of ease and this functionality. I think those two things really make up what Altuzarra is.”

From the beginning, the company was a family affair — the designer’s father Philippe Altuzarra provided the label’s startup capital, while his mother Karen Altuzarra, a former investment banker, acted as CEO, “getting really good payment terms with stores or helping out with distribution, doing a lot of store visits and really shaping the infrastructure of the company.” About two years ago, she became chairman, making way for Karis Durmer, Altuzarra’s current CEO. “My mom wanted to pull back and she was looking for someone to basically take over. The switch was very easy. Karis started taking on more and more things that my mom was doing and then my mom sort of pulled back. They really communicate a lot. I mean, Karis speaks to my mom a lot more than I do.” 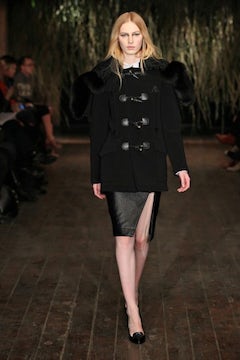 But the brand’s breakthrough moment came a year and a half ago with the launch of its strictly tailored, coin-embroidered Fall 2012 collection. “That was really a turning point, editorially and commercially, for us,” says Altuzarra. “It’s the collection that laid the foundation for the silhouette that the brand is starting to become known for — that very straight shoulder or the slit skirts, the slit dresses. It was also when we really started developing this idea of very masculine and very feminine paired together and really started understanding that outerwear and tailoring was a big category for us.”

Indeed, not only was Altuzarra’s Fall 2012 collection one of the highlights of the season, it also generated a 36 percent increase in sales for the brand and a 40 percent rise in the number of stores carrying the line, and helped to crystallise the design template on which Altuzarra builds, season after season.

With a signature silhouette cemented, Altuzarra began honing in on the brand’s core values with an eye towards growth. “It’s taken us a year and a half to really get to a point where everyone in the company has the same understanding of what the brand is about, of who the Altuzarra woman is and what the brand means,” he says. “But once you get to that point of understanding, it’s so easy to [say] this is what our bag is going to look like; this is what our website is going to look like.”

Just before New York Fashion Week, Altuzarra is set to debut a new website, which, alongside runway images and lookbooks, will feature inspirational imagery selected by the designer. But critically, the site will lack e-commerce functionality. “Pre-Fall is the next thing we’re adding on as a substantial sort of investment,” Altuzarra says. “But also, as Karis has come on, she’s really implemented these processes for gathering intelligence about our customer and our market and sell-through information. So we’re understanding why people come to us, what they’re buying from us, what our real points of differences are. We’re also able to understand where our collections are lacking, and what we can do about it and how we can improve. So it would maybe be doing much bigger knitwear collections, much bigger resort collections.”

But scaling the company will, likely, take an injection of external capital, something Altuzarra is ready to consider if the partner feels right. “I think we’re at a time in the [growth of the] company where we are open to [external investment] and we sort of look at opportunities as they come,” Altuzarra says. “But the plan is to keep on building the business in a really ambitious but also wise way.”