Today, accessories brand Want Les Essentiels de la Vie is stocked at some of the world’s best stores. But a few years back, the business was on the verge of collapse. Co-founders Byron and Dexter Peart tell BoF how J.Crew's Mickey Drexler helped them regain faith in their brand — and take it to the next level.

Want Les Essentiels de la Vie is set to launch a pop-up store at The Standard Hotel in Hollywood, next month, and, later this year, will unveil its own e-commerce site. A physical retail presence is planned for 2014. And while the privately held company doesn’t release revenue figures, according to Dexter Peart, today Want Les Essentiels de la Vie is a multimillion-dollar business that posted revenue growth of 77 percent for 2012, a rate it is on track to match this year. 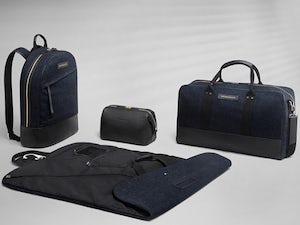 From the very beginning, company’s vision was well-planned and well-timed, a reflection of the extensive marketing knowledge the founders acquired while running Want, an agency that helped introduce of-the-moment brands like Acne, Nudie Jeans, Filippa K and Maison Kitsuné to the North American market. Founded on the idea that a fashion product should be both utilitarian and beautiful, Want Les Essentiels de la Vie, best known for its technology cases and travel bags, successfully capitalised on a convergence of two important trends that were taking shape around the time of the brand’s inception: the proliferation of portable technology devices like iPods, smartphones and laptops, and the increasing appetite for luxury items that were recognisable and expensive-looking, yet discreet. The label’s first collection — nearly devoid of branding and based, instead, on simple, elegant shapes and basic, appealing colours — consisted of two computer bags and two iPod cases and was picked up by Barneys New York and Opening Ceremony.

But all was not right. “The business was all over the place and there was no cohesion to it,” the founders of Want Les Essentiels de la Vie told BoF. For one, the product assortment was crowded around an entry level price point (gifting items starting at around $150) and the top-end (premium bags for over $1500) with little in between. What’s more, the brand’s production and a number of their stockists were spread around the globe, something that quickly became an operational liability. And as the business grew, their manufacturing partners had trouble keeping up with increasing demand.

Things became critical when two of the brand’s suppliers went out of business. In 2009, the Norwegian tannery that supplied the high-grade leather used in all of the brand’s products declared bankruptcy. Then, a few months later, one of the Italian factories with which the brand worked was also shuttered. Facing serious supply chain issues, the Pearts were challenged to fulfil their open orders and spent months travelling around the world, sourcing materials and seeking partners who could assemble their product, a task that was complicated by their refusal to compromise on quality.

In the end, the company managed to meet their delivery requirements, but the strain was enough to make the Pearts and Wiltzer question their commitment to the enterprise. “We had to decide whether it made sense to continue to invest in the business,” said Dexter Peart. “If we were going to keep going, it was imperative that we increased our scale, built better and more strategic prices and developed the collection by adding new segments. We gave ourselves until the end of the year.”

Interestingly, it was a chance meeting with J.Crew CEO Mickey Drexler that triggered the brand’s turnaround. Drexler told the Pearts that he knew and loved their brand. “A few days later Mickey came up to our office in West Chelsea with [J.Crew creative director] Jenna Lyons.” By the end of the meeting, the Pearts had agreed to collaborate with the retailer on a special capsule line for the holiday season. The collection hit J.Crew stores in November of 2009 and sold out in three weeks, giving the young brand a healthy lift in revenues, invaluable exposure and a major morale boost.

“At that critical moment when we were uncharacteristically burdened with doubt, it encouraged us to keep calm and carry on, which in turn helped us overcome the setbacks that we had been faced with,” said Byron Peart. What’s more, their ability to rise to the challenge and deliver at the volume and speed that J.Crew demanded reignited their belief in their company’s potential: “From our first meeting to delivery of products in-store, it all came together in less than 4 months. We didn’t know that we had the capacity to work at that kind of scale and it reinforced our commitment to our brand and motivated us to restructure and invest to be able to deliver on the goal we set out on from the beginning: to build our own internationally recognised, respected and desired accessories label.”

Buoyed by the J.Crew order, Want Les Essentiels de la Vie crossed over into profitability in late 2009 and has remained profitable ever since. In the intervening years, the company has hired a global sales director, a design team and additional sales staff, bringing the total number of full-time employees to nine.

“That struggle period showed us that while we had the sales and marketing right because of our background with the agency, we had less experience on the production side of things.” Looking back, the founders also think their early ambition to sell globally may have been misguided: “We should have focused on our own region first before looking at the whole world.”

But thanks to their perseverance, it’s the world that is now looking at this rising leather goods brand from Montréal.