Before the debut of his second capsule collection with Net-a-Porter, set to launch on July 17th, designer Esteban Cortazar spoke to BoF about why leaving Ungaro was the best decision of his life, his new business model, and why slow and steady wins the race.

LONDON, United Kingdom — Much has been written about Colombian-American designer Esteban Cortazar’s precocious and meteoric ascension to the upper echelons of the fashion industry. The basic facts are these. Cortazar grew up in Miami in the 1990s — where he lived with his painter father in a studio-cum-apartment on Ocean Drive above the famous News Café, the only place in town that sold high fashion magazines and a regular breakfast haunt of the late designer Gianni Versace.

He soon befriended Versace, followed by the designer Todd Oldham (who invited him to New York for a fashion show) and the owners of vintage shop Love Me Two Times, weaving himself into the fabric of Miami’s fashion scene. At the age of 17, Cortazar became the youngest ever designer to show at New York Fashion Week. And, in what seemed like the climax of a veritable fashion fairytale, at 23, Cortazar was appointed creative director of Parisian fashion house Emanuel Ungaro. 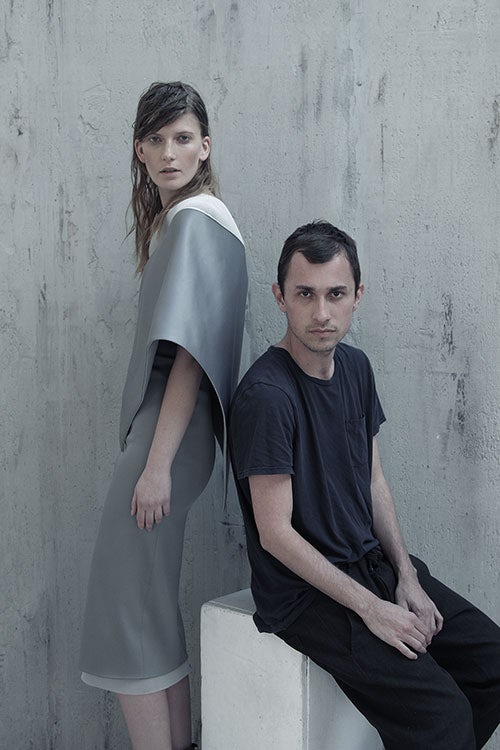 Only two years later, in 2009, he left the brand after a dispute with management over sharing creative duties with actress Lindsay Lohan. But, nonetheless, Paris was a vital training ground for Cortazar. “It allowed me to learn in two years what I otherwise might have learned in ten. I knew the love of women that I had and the love for the female body… But I don’t think I knew the actual language that I really wanted to speak on a deeper level,” he told BoF. “I wasn’t thinking of [designing] as an identity per se, I was responding to what was around me, which was colour, sex, flamboyance; it was maybe a touch of kitsch.”

When he first arrived in Paris, Mr. Ungaro and his wife invited Cortazar to their home for a meal, a meeting he credits with helping him decide to walk away from the Ungaro label when Lohan was invited to co-design the line. “Meeting him was one of the key things that led me to believe this was the right decision. I could already see how unhappy he was with the direction the house was taking, with the revolving door of designers, the lack of respect that they had,” Cortazar said. “At the end of the day, I had to respect this man and do something that would show I respected what he built. I feel like the first time I had really grown up was when I dealt with that — to be able to take that in and deal with it in a graceful way, with honour and dignity.”

But that was then. And this is now. Sitting in the spacious, light-filled headquarters of luxury e-tailer Net-a-Porter, where the 29-year-old designer has set up a showroom for the second instalment of a capsule collection backed by the retailer, Cortazar appears as serene and as far from the hype that defined his early career as he can be. “When I look at it now, I don’t regret anything, but yeah, it happened way too soon,” he conceded, in a warm and charming American-inflected accent. “The industry kind of ate me up right away. The core meaning of what I was doing was, in a way, put aside and it was all focused on my age and the newness of that — the prodigy and all that. I never really looked at it that way and I never intended for things to go so fast.”

The spectre of being “eaten up” by the fashion industry is perhaps why it’s taken Cortazar three years to re-emerge. But this time it’s on his own terms. Last September, with a “kickstart” from Net-a-Porter’s vast infrastructure and global distribution platform, he quietly launched a womenswear capsule collection of 20-odd dresses, separates and gowns in cream and blush tones. It was a success.

“When he left [Ungaro], I immediately said that he should use Net-a-Porter as a platform to launch his own collection, without having to set up the entire infrastructure of a business. He could also design on his own time, not to the traditional schedule,” Natalie Massenet, founder and executive chairman of Net-a-Porter Group, told BoF. “It was as about supporting Esteban as testing our ability to support,” she continued. “He is back designing great clothes, the consumer gets something she can’t find anywhere else, and we get to facilitate this.”

Now, Cortazar is back for a second round with 18 pieces of structured, athletics-inspired separates, characterised by an easy elegance and wearability, made with satin and stretch cady. “It’s an exploration of the curves and lines and angles of the female body and the gestures of the body — when a girl is dancing, when a girl is walking, when a girl is sitting. I was thinking about dance and the elasticity of stretching, but at the same time done in a rigid way,” Cortazar explained.

Many of his new pieces, including a charcoal grey evening gown and bustier top, are accented with pebbled stingray skin and capture the animal’s grace and fluidity when swimming through water. The collection also has a certain utility, seen most clearly in a charcoal pantsuit that can be easily mixed-and-matched and a windbreaker jacket that transforms into a cape when fully zipped.

“Esteban does high fashion for women who are looking to stand out in a chic way… [his clothes] are different from anything else you will ever own; yet somehow, when you put them on, you can immediately see how they will work with the rest of your wardrobe,” added Massenet.

Importantly, Cortazar’s partnership with Net-a-Porter has allowed him the freedom to explore an unorthodox business model. “You start thinking in a way that’s more universal and global,” he said of his new approach, which also offers important operational efficiencies. First of all, there is no expensive runway show. Orders are placed by Net-a-Porter based on sketches, without waiting for physical samples to be produced. Meanwhile, production is fine-tuned to the retailer’s forecasts, based on a range of data points and intimate knowledge of their customers’ buying habits and preferences, gleaned from a research panel of over 7,000 women. As a result, prices for his pieces are reasonable for the category, topping out at £1,600 (about $2400 at current exchange rates) for an evening gown. Tops and skirts range from £500 to £800.

On the back of his partnership with Net-a-Porter, several offline stores have taken interest in stocking Cortazar’s work, including Maria Luisa at Printemps in Paris and D’NA in the Middle East. "Net-a-Porter has given me an incredible kickstart to relaunch my business and they've allowed me to fully express and build my own vision through their amazing global platform and I plan to have a number of pieces in the collection that will continue to be globally and 100 percent exclusive to Net-a-Porter. But the plan has always been for this push to help my business become fully independent and be able to start locking in additional investments, as well as to open distribution with the right offline partners and stores in key cities worldwide."

Indeed, Cortazar has big plans for his resurgent label, including regular pre-collections and a new capital injection to finance growth. But this time around, he’s in no rush.

“I find that it’s so much more powerful to do a slow and steady development of a brand. Because I already know what it is to go really fast. I feel like slow and steady, as they say, can win the race.”