PARIS, France — Revamped versions of your dad’s old footgear — once decidedly uncool — are the latest sneaker fad. It all began back in 2013 with the Ozweego, a chunky $300 Adidas by Raf Simons sneaker that resembled popular vintage Adidas, New Balance and Sketchers models from the 1990s and featured unexpected combinations of colours and fabrics, including mesh and rubber, attracting followers of fashion and sneakerheads alike.

Over the last two seasons, the trend has appeared at luxury houses including Balenciaga, Dior Homme, Gucci, Lanvin, Prada and Acne Studios, all of which created versions of the style for their male consumers who are increasingly taking their style cues from streetwear.

The launch of Vetements’ $650 graffiti-inspired version of Reebok’s iconic chunky Instapump Fury shoe in January 2017 was a turning point, says Brian Trunzo, senior menswear editor at WGSN. Indeed, the popularity of clean, sophisticated-looking sneakers began to peak on the runways in 2014, making way for noticeably louder designs. “In the past two years or so we’ve moved away from stark minimalism and started moving towards more maximal design,” adds Trunzo. 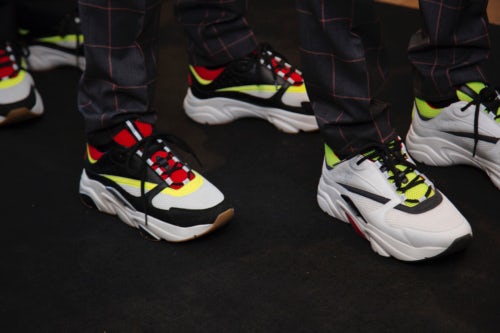 “These designer sneakers are like the male version of the it-bag,” says Damien Paul, head of menswear at MatchesFashion. In the last year, the luxury e-tailer has seen a 150 percent increase in its overall sneaker buy, with chunky models surging by 400 percent, according to Paul. Mr. Porter has seen similar growth. “We have increased our [sneaker] buy over four times since last season alone,” says David Morris, a shoe buyer at the men’s e-commerce site. “Raf Simons’ Ozweego sold out within five minutes.”

“Men’s lifestyles have changed. They don’t always have to wear suits to work anymore — and then there’s the huge influence of rap stars with massive social media followings. Guys watching them want to emulate what they’re wearing,” continues Morris. “Street culture has become such a strong element of what guys are buying that luxury fashion houses are obviously following what’s happening in music and youth culture.”

“I think these [luxury] houses took a long look in the mirror and realised that they were doing some things wrong and that culture was moving against them,” says Trunzo. “The tides were turning and they have to embrace what is going on, on a street level.”

Street culture has become such a strong element of what guys are buying that luxury fashion houses are obviously following.

As a result, in the past year alone, over a dozen brands have sent out significantly bigger trainers down their runways than they have done before. Luxury brands are increasingly seeing opportunity in creating innovative staple sneaker models of their own at aspirational price points, and it has resulted in them now leading a trend that was once ruled by sportswear labels.

“Quite often luxury and streetwear brands operate the same way and speak to the same customer and that’s not a problem at all. For me the only way to stay relevant as a fashion house is to go forward and to think of the now and the future,” says Lucas Ossendrijver, creative director of Lanvin menswear, who created a diving-inspired chunky trainer for Autumn/Winter 2017.

Not everyone agrees. “Luxury and streetwear have never been more connected and the danger lies within forgetting what makes us different,” says Dior Homme creative director Kris van Assche. “I very strongly believe in streetwear as a source of inspiration but other than [that], I think it’s important to insist on what differentiates us from the streetwear brands. A certain form of education is important to explain quality, finishing and price,” continues the designer, whose Spring/Summer 2018 collection showed bulky sneaker silhouettes with modern tailoring. 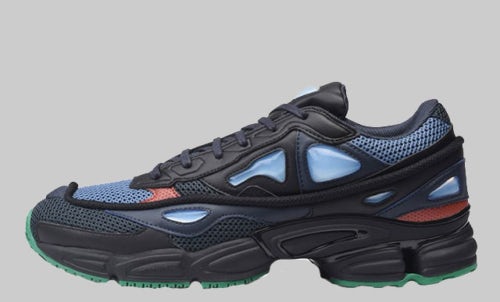 With the line between luxury menswear and streetwear becoming thinner, some might indeed agree that too many streetwear references risk diluting a luxury brand. “The true luxury houses don’t want to see [designers] do that. But for the people that see fashion as evolution… and are doing it in an interesting way, I don’t think there’s anything wrong with that,” says Brad Lacey, global design director of lifestyle at New Balance, which has been putting out thick-cushioned sneakers like its 990 model since 1982 and is now gearing up for the next wave of consumers with new chunky models once the fad hits the masses. “I think that with every trend you’ll see it be evolved and it will mature for a few years. What everyone is trying to gauge is how mainstream this trend is going to become."

But for luxury brands chasing the pack, the trend will die a quick death says Trunzo. “I think that there are brands out there that have tried to chase and then you can see that it’s not integral to their brand, but if it can integrate and move forward with the shift of the times, that’s what luxury is all about.”