Undercover to Quit Women's Shows in Favour of Men's

Jun Takahashi will stage men's shows on the Paris schedule, starting in June.

PARIS, France — Undercover's latest women’s show, an ode to the innocence of American youth, was its last — at least for the foreseeable future. Instead, Jun Takahashi, the label’s designer, is putting greater emphasis on his menswear and will begin showing his men's collection on the runway in Paris starting this June with the Spring/Summer 2019 season. Takahashi has previously staged runway shows for his womenswear, while presenting his menswear via a look book.

Although Undercover’s highly conceptual women's shows routinely garner critical acclaim, a small majority of the label’s business comes from its menswear, for which Takahashi has attracted a loyal following. 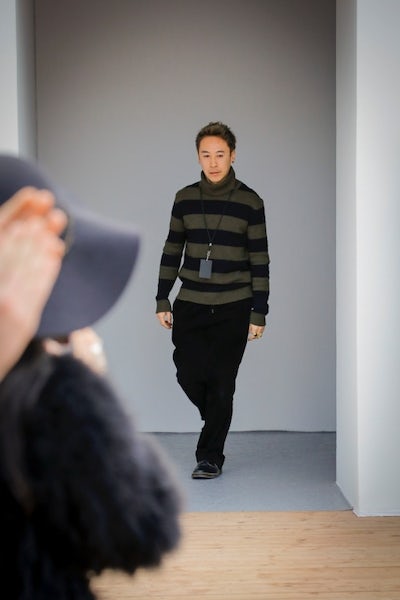 “While I enjoy designing womenswear, for me creating a conceptual women’s show requires designing clothes that are rather extreme. It has been a tricky balance to make women’s clothes that are both creative enough to make a statement on the runway but also wearable," said Takahashi.

“Although it is important for me to make an impactful show, I would also like the clothes I design to be worn,” he continued. “Conversely, I feel like I don’t need to make extravagant menswear to make a conceptual runway show. I also feel confident that my menswear design has improved over the years. That is why I felt ready to do a show at Pitti Uomo,” he added, referring to the menswear show, influenced by Stanley Kubrick's 2001: A Space Odyssey, which the designer presented earlier this season at the Pitti Uomo trade show in Florence. Takahashi’s only other men’s show to date — staged in June of 2009 — also took place at Pitti Uomo.

Undercover is known for mining cultural references and unconventional storytelling, and Takahashi aims to continue in the same vein. “I already have some ideas in mind, and the June show will reflect my unique point of view and I hope it will differ from other men’s shows,” he said. Certainly, the label will benefit from new space on the Paris menswear calendar since labels such as Givenchy combined its men’s and women’s shows on the women’s calendar and Raf Simons moved his own-label show to New York.

Undercover will continue presenting its womenswear at its showroom in Paris and Takahashi is mulling other methods of visual expression, such as photography and short film.

Undercover and The Soloist to Be Next Guest Designers at Pitti