NEW YORK, United States — One week ago, as models walked the New York Fashion Week runways from Spring Place to Central Park, the industry wondered about the future of American fashion. Meanwhile on Fifth Avenue, a different kind of question was on everyone’s mind.

“When are we going to get fashion?” asked Lorraine Lee, one of over 1,000 attendees at The Curvy Con, a gathering plus-size fashion fans that took place during the September shows for the second year. As Lee stood in line for a goodie bag last Saturday, she shared her frustration with the many blouse-y options on the market for plus-size women. “Anytime we look on the runway, we see the look — even though it’s size 2, we still like it. It can still fit someone in a plus-size silhouette if they think about how it’s going to work for us.”

Launched in 2015 by CeCe Olisa and Chastity Garner Valentine, The Curvy Con brings together retailers, influencers and consumers over three days of panel talks, workshops, giveaways, shopping, hair and makeup styling, live fashion illustrations, photo-booths and a runway show. The goal is to change the conversation around a community that has long been considered niche and therefore underserved when it comes to options and access: women who wear a size 14 or above and who, according to market reports, represent almost 70 percent of American women. 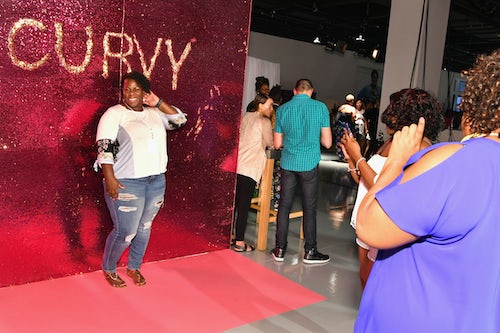 The Curvy Con’s growing popularity — ticket sales doubled this year and new sponsors included Old Navy as well as Target — is not the only indication that the plus-size market is evolving for the better. Plus-size models are now seen more on runways and campaigns. And while oftentimes the marketing effort is superficial because brands don’t offer products for plus-size consumers, that’s changing too. Rihanna’s Savage x Fenty lingerie line is a prime example. Similarly, the VC-backed luxury online retailer 11 Honoré is steadily growing since it launched in 2017 with 15 brands; now it has almost 80 brands on its platform, including Prabal Gurung and Brandon Maxwell. Its best-selling size is 20.

Consider also Dia&Co, a VC-backed subscription apparel company founded by Nadia Boujarwah and Lydia Gilbert in 2016, that launched an activewear line in May and has collaborated with everyone from tennis champion Venus Williams (who appeared at The Curvy Con) to Nanette Lepore. There’s a number of new brands on the market, too, including Nicolette Mason and Gabi Gregg’s Premme and Rebdolls, as well as other digital players such as Eloquii and Universal Standard, which has collaborated with J.Crew.

“The biggest change in 2018 is these blue-chip designers starting to understand the importance,” said Mina White in an interview. The director at IMG Models New York represents “Curve” models including Ashley Graham, Paloma Elsesser and Candice Huffine. White cites Graham’s campaigns for Revlon, David Yurman and Esseler’s relationships with Coach and Calvin Klein as examples.

But the progress is limited. The plus-size apparel market represents more than $21.4 billion in the US, according to the NPD Group, and is growing twice as fast as the overall apparel market. However, plus-size customers have limited shopping options. Most of what they see in mainstream marketing campaigns, on the runways and in stores will never be produced in a size 14 or larger.

For example, Graham appeared in a campaign for Rag & Bone this year, even though the brand did not sell the range she modeled in her size. After consumers reacted, the brand announced that it would extend its denim size range.

“Brands don’t quite understand what size diversity actually means,” said White. “Sometimes the conversation has to come after the fact.”

Many designers and retailers simply do not want plus-size customers buying and wearing their products. They think they have less disposable income or interest in fashion.

And when it comes to a category like activewear, there is an assumption that plus-size customers do not exercise. When Dia&Co released its activewear line this year, it enlisted Team USA discus thrower Shelbi Vaughan to model the line and demonstrate that athletes come in all shapes and sizes.

“There’s just a stigma and a snobbism in fashion that sometimes stops people... and that really has to be dispelled,” said Emma Grede, co-founder of Good American, in an interview. The denim and activewear apparel brand she launched with Khloe Kardashian in 2016 offers sizes 00 through 24.

For 11 Honoré, proving to brands that its platform is a luxurious environment to sell has been a key part of its strategy. “The creative piece was really important,” said co-founder Patrick Herning in an interview. “If our site has shown brands anything, it’s that [plus-size fashion] can be beautiful, it is beautiful on a size 2 or a size 20.”

Nadia Boujarwah said Dia&Co launches brands internally because it struggles to find enough assortment on the market for the plus-size customer. “Twenty-five and 55-year-old women are shopping at the same places — it’s not necessarily because they are looking for the same thing, it’s because the options are that limited,” said Boujarwah at The Curvy Con.

At 11 Honoré, the company works hand-in-hand with luxury designers to help them produce their runway designs in plus-sizes. “We are slowly creating the product, which is slowly creating the market,” said Herning. The retailer has a range of relationships with its brands, some of whom are ready to produce plus-size garments, such as Zac Posen, Juan Carlos Obando and Mara Hoffman, and others with which 11 Honoré is partnering with more closely to help them develop patterns, such as 3.1 Phillip Lim and Altuzarra. The company also offers standardised fit models for its brands. After initially carrying brands up to a size 20, 11 Honoré is now focusing on extending its sizing range to 24.

The plus-size customer is accustomed to shopping online only, because in-store options have been severely limited.

“We need to go all the way there with our own brands, and we are,” said Tricia Smith, Nordstrom’s executive vice president and general merchandise manager of women’s apparel, in an interview. She referred to both size ranges and in-store availability.

When Nordstrom launched Good American in its stores in autumn 2016, Grede required that the entire line be carried in the store and merchandised together. The result was a success for both the brand and retailer and the best selling sizes were 16 and 18, as well as 00. “We realised how much of a demand there was for a new brand,” Smith said, explaining how the retailer took those learnings and brought an expanded size range from 100 brands to 30 brick-and-mortar locations this May.

“We need to perfect that in-store experience,” said Sara Westbrook, Old Navy’s head of plus and maternity merchandising, a speaker at The Curvy Con. The Gap-owned brand is testing plus-size in-store offerings at 75 stores right now, after offering it online for the past decade. 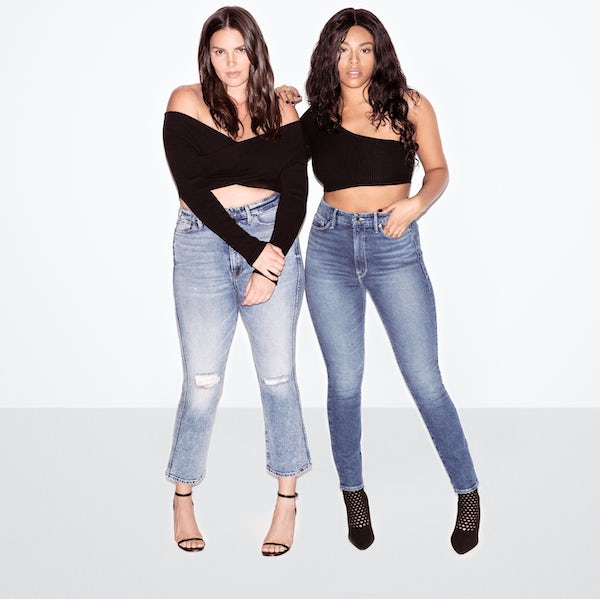 Good American's size 15 will be available in the Good Curve style, worn above | Source: Courtesy

For brands trying to expand their size offerings, nailing fit is challenging and capital intensive. A pattern used for straight sizes (typically 2 to 12) cannot be graded up indefinitely. And not all pattern-makers and designers have expertise in plus-size garment production and fit; the curves of the bodies are different, and the potential body shapes vary, too. For example, two women can both be size 20 and have radically different proportions. Good American’s Grede struggled to find pattern makers who not only had the technical skills needed to perfect plus-size fit, but who also wanted to dedicate themselves to the task.

Dia&Co’s Boujarwah said lack of specialised education is one of the root problems holding back size diversity in fashion. “As long as we have a system that hasn’t changed we can’t assume the output of that system is going to change."

“It’s not possible to fit things the same way on a size 8 as on a size 20,” said designer and CFDA board member Tracy Reese, while speaking on a panel at The Curvy Con. “We were taught to do an 11 head tall sketch [a taller, and therefore more elongated, than the average body shape]. We need to be visualising clothes in different sizes on different body types.”

Reese appeared at the conference to represent the CFDA with Boujarwah to reveal a new joint initiative, Tee Up Change. Together the two organisations are pledging to fund size-inclusive design education at CFDA affiliated schools across the country. The initiative is also supported by the sale of t-shirts designed by size diversity advocates designer Christian Siriano, Venus Williams, Lizzo, Reese and others.

Representation within the industry

At The Curvy Con, Nicolette Mason, the influencer and co-founder of the direct-to-consumer plus-size brand Premme, moderated a panel with representatives from retail brands and highlighted how many organizations that create plus-size fashion do not represent that customer in their own teams.

“We have to be able to have diversity of thought at the table anytime we are making a decision, and for us to be able to do that well means we need to have all types of diversity,” said Boujarwah, adding that 75 percent of Dia&Co’s on staff stylists identify as plus size.

White said that despite “banging on the doors of the designers,” runway fashion has not embraced size diversity. “Every season, [they say], ‘Oh, we don’t have the samples,’” she said. “I find that super frustrating.” Without plus-size samples, curvy models can’t get cast in advertising campaigns or book magazine editorials published the following season.

The Curvy Con’s founders Olisa and Valentine want the conference to be a safe space for women to express how a brand’s marketing messages impact them emotionally. But they also stress that the plus-size customer is not a monolith, and while many do not want their clothing marketed to them as slimming or flattering, “a person in the middle of the country who might not be exposed to [body positivity], those words might still speak to her,” said Olisa. “We get that but we hope that that’s not the only narrative that we get when we shop for our clothes … That’s why the open dialogue, for us, is important.”

Good American’s Grede said her brand is on the side of body acceptance, never promising its customers a slimming effect. A new “cultural shift” is also changing the conversation. “There are a massive number of girls who are trying to get a bigger booty, who are trying to get thick thighs — that is their definition of beauty,” she said. “Most of the girls I speak to are very happy with what they’ve got and they want to make the best of it. That’s what we’re about.”

How to Make Your Brand Size Inclusive

Why Size Is More Than a Number