The editorial director of the books department at the New York Times is Condé Nast’s choice to succeed Graydon Carter. 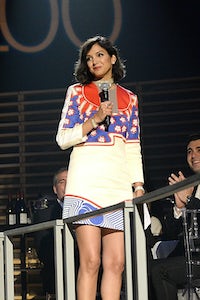 The editorial director of the books department at the New York Times is Condé Nast’s choice to succeed Graydon Carter.

Editor's Note: This story was updated on November 13 to include Conde Nast's official announcement of the appointment.

NEW YORK, United States — After a search that yielded a long list of potential candidates from inside and outside publishing, Condé Nast has found its successor for Graydon Carter at Vanity Fair. Radhika Jones, currently the editorial director of the books department at the New York Times, will oversee all content and consumer experiences for the magazine brand across all platforms, including its new digital vertical The Hive. She will also take the lead on Vanity Fair's tentpole events, including the Oscar Party in March 2018 and the New Establishment Summit. Her first day will be December 11.

Condé Nast announced the appointment on Monday following a report from the New York Times published on Saturday.

Prior to joining the New York Times at the end of 2016, Jones oversaw all arts and entertainment coverage at Time magazine, which she joined in 2008 and was named the deputy managing editor in 2013. While at the magazine, she oversaw several special issues, including Time's Person of the Year and the Time 100, and led the annual Time 100 Gala for seven years. Given that editing Vanity Fair requires relationships with leaders from Hollywood to publishing and Silicon Valley, her work on Time's yearly list of the most influential artists and innovators was likely an important reason for her hire. Before Time, Jones was an editor at the Paris Review.

"There is nothing else out there quite like Vanity Fair,” said Jones in a statement. “It doesn't just reflect our culture—it drives our understanding of it. It can mix high and low, wit and gravitas, powerful narrative and irresistible photography. It has a legacy of influential reporting, unmatchable style and, above all, dedication to its readers. I am honored to succeed Graydon Carter as editor and excited to get to work.”

Many candidates were considered for Carter's coveted job including Janice Min, co-president and chief creative officer of The Hollywood Reporter, and Jay Fielden, editor-in-chief of Esquire. While it is understood that Condé Nast wanted a more well-known name to take the job (television personalities Anderson Cooper and Jon Stewart's names did come up in the rumours), the company ultimately focused on hiring a woman in light of the Harvey Weinstein scandal that has set off a series of workplace sexual harassment allegations. Carter succeeded Tina Brown in 1992 when she took over the New Yorker.

Carter was not involved in the hiring process, according to the New York Times. The decision to hire Jones came from Bob Sauerberg, chief executive, and Anna Wintour, editor-in-chief of Vogue and Condé Nast’s artistic director, with assistance from David Remnick, editor of The New Yorker.

“Radhika is an exceptionally talented editor who has the experience and insight to drive the cultural conversation—balancing distinctive journalism with culture and humor," said Sauerberg. “Her experience covering news and entertainment has given her a thorough understanding of the importance of chronicling and celebrating the moments that matter. With her expansive worldview, I know she will guide Vanity Fair’s history of provocative and enduring storytelling well into its future.”

“In Radhika, we are so proud to have a fearless and brilliant editor whose intelligence and curiosity will define the future of Vanity Fair in the years to come,” said Wintour.

Meanwhile, Condé Nast's editor search is not over: The announcement of Cindi Leive's successor at Glamour is also expected this week.