The editor-in-chief and chief business officer Chris Mitchell tell BoF about the magazine’s approach to fashion and style ahead of Jones’s first trip to the European shows. 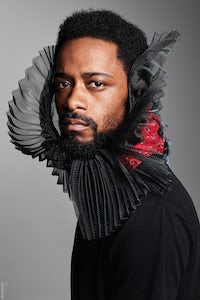 The editor-in-chief and chief business officer Chris Mitchell tell BoF about the magazine’s approach to fashion and style ahead of Jones’s first trip to the European shows.

NEW YORK, United States — This upcoming fashion month will be something of a coming out for Vanity Fair’s new editor-in-chief Radhika Jones, who is heading to Milan and Paris for the first time.

As the former books editor for the New York Times and deputy managing editor for Time magazine, Jones, who joined the magazine in January 2018, is an unknown to the fashion world. The industry is eager to understand her vision for the general interest magazine known for its glamorous, mischievous take on high and low culture, and the dramas of international power players. Her reserved demeanour stands in contrast to that of her predecessors Tina Brown and Graydon Carter, two of the most prominent “celebrity editors” of the magazine boom years.

It’s been a tough year for Vanity Fair's publisher Condé Nast, which lost $120 million last year and aims to reduce that figure by half in 2018 by selling three titles, reducing expenses and developing new streams of revenue beyond traditional print advertising. Vanity Fair is one of the publisher’s core brands, and Jones’s tenure has provided an opportunity to not only modernise the magazine’s coverage but also cut bloated paychecks and contributor contracts that weighed on its bottom line.

While Jones’s April cover for the magazine — featuring actress, writer and producer Lena Waithe, not a typical cover star, wearing a plain white t-shirt — spoke volumes about how the editor wants to use the media brand’s platform to shine a light on a new generation of tastemakers, her vision for how she wants to evolve Vanity Fair is still hard to pin down. 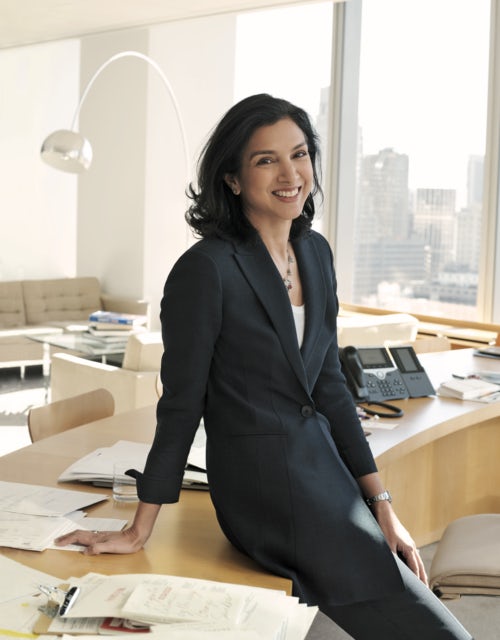 “I look at [Vanity Fair] as one of the great, truly general interest magazines,” Jones tells BoF. “And for me, it exists at the intersection of personality and power.” And she says the fashion world fits right into those core specialties.

Her approach hasn’t alienated readers — or brought in many new ones. While single-copy sales have decreased since Jones took over the magazine, averaging 101,834 a month in the first half of 2018 versus 128,140 a month in the second half of 2017, subscriptions have increased in the same time periods to 1.13 million from 1.12 million, according to the Alliance for Audited Media. Jones’s best selling cover was May 2018, featuring Prince Harry and Meghan Markle.

Fashion is Vanity Fair’s largest advertising category, and therefore a crucial community for Jones to meet. To mark Jones’s first season abroad, Condé Nast’s artistic director and American Vogue editor-in-chief Anna Wintour will host a cocktail party for her in Paris on September 26.

The timing will be fortuitous. In the October issue out September 6, featuring actress Felicity Jones, Radhika Jones presents a new best-dressed list developed with executive fashion director Samira Nasr, who joined the magazine from Hearst’s Elle in June.

When Vanity Fair’s former editor-in-chief Graydon Carter left last December, followed out the door in the subsequent months by most of his top editors, the International Best Dressed List presented in the magazine’s pages each fall since 2004 went with him. The list that started in 1940 actually belongs to Carter and editors Aimee Bell, Amy Fine Collins and Reinaldo Herrera. Its originator, Eleanor Lambert (the founder of the CFDA and New York Fashion Week), bequeathed it to them in 2002, a year before she died.

So, Jones started her own best-dressed list, wrangling a panel of judges that features both newer names to the magazine’s orbit, such as model Farida Khelfa, and longstanding contributors, such as stylist Elizabeth Saltzman. Other judges include the Studio Museum in Harlem’s director and chief curator Thelma Golden, creative director Alexandre de Betak, runway music producer Michel Gaubert, YouTube’s Derek Blasberg and jewellery designer Lisa Eisner.

The result is a tight list of 43 honorees — the International list featured a similar number of names each year in addition to a growing hall of fame category — ranging from the Duchess of Sussex Meghan Markle to Rihanna and Donald Glover, as well as fashion’s own Miuccia Prada, Ralph Lauren and Duro Olowu. Instead of New York and European high society fixtures, the new list favours stylish personalities from the art world who might be less known to Vanity Fair’s audience, such as writer Édouard Louis, art curator Louise Neri and French rapper Eddy de Pretto. The list is accompanied online by a video series featuring Tracee Ellis Ross, Jeff Goldblum, Lakeith Stanfield and Troye Sivan talking about their style evolutions.

“There’s a lot of fun being had in the world of fashion and celebrity right now, it seemed to me,” says Jones. “Who is really out there pushing the boundaries in fashion, what would that look like?” 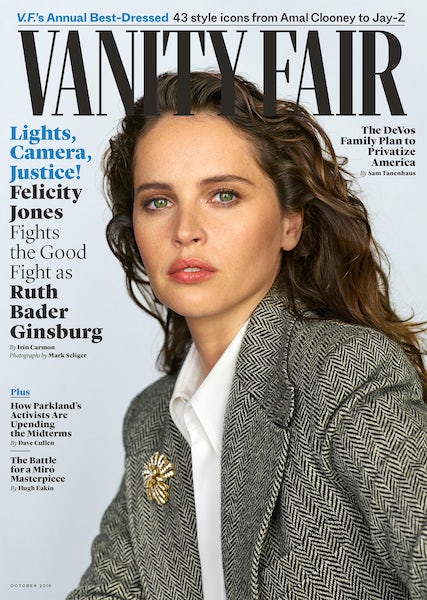 The new best-dressed list follows a graphic redesign introduced in the September style issue, covered by Michelle Williams wearing Louis Vuitton shot by Collier Schorr. (Despite the fact that the actress and photographer worked on Louis Vuitton ads together this season, a representative for the magazine says the cover was not an ad, but a coincidence.) Jones enlisted creative director Chris Dixon to reimagine the visual vocabulary of the magazine with more energy and clarity — there is more white space, columns of text run longer, the typefaces are rounder and the masthead is slightly smaller. Jones says she was inspired by the issues from Tina Brown’s era and Carter’s early years, and says the reaction has been encouraging.

But the new Vanity Fair also has its critics, including Cable Neuhaus at Folio, who praised the mix of stories in its pages but described the magazine as “more modest at every level” and lacking “the kind of buzzy stories that helped propel the magazine to superstardom.”

An annual best-dressed list has become a key franchise for Vanity Fair — one that Mitchell identified as under-leveraged when he started working on Vanity Fair five years ago — which means that losing it when Carter left posed a problem. But Mitchell says there are advantages to working with a Vanity Fair-owned list because the magazine has “the freedom to really brand everything we do around it much more in the cloak of Vanity Fair, which it wasn't before."

Two years ago, Saks Fifth Avenue became a partner on the best-dressed list and has co-hosted an accompanying party each year in New York with the magazine. Mitchell says the retailer was “looking at the time for a real franchise that they could own.” The partnership continues: in the month leading up the reveal of the new list, Vanity Fair released portraits of the honorees online, photographed by Eleanor Lambert’s grandson Moses Berkson, wearing looks available at Saks Fifth Avenue. The next co-hosted party will be held this month.

Events are core to Vanity Fair’s business, especially as print advertising continues to decline. There are the conferences, including the New Establishment Summit, inspired by the magazine’s annual list of influencers in technology, media, entertainment, politics and the Founders Fair designed for female entrepreneurs. And then there are the parties, tied to the Cannes Film Festival and the Emmy’s (co-hosted this year with FX), as well as the famous annual Oscar party, which will celebrate the 25th anniversary of Vanity Fair’s Hollywood issue next year.

There's something interesting to me in the combination of fashion and personal expression that I think is very key to the way that celebrity works now.

“[The Oscar party] continues, despite all the changes in our media business, to be a hugely profitable driver of direct and indirect sponsorship and media dollars,” says Mitchell. He says the VF team is also working on an event that will fill the political void left after the magazine stopped hosting a party after the White House Correspondents Dinner with Bloomberg.

Mitchell says the challenges facing media are not so different from the challenges disrupting fashion and retail — both are competing with online businesses and seeking ways to engage audiences through content. Vanity Fair’s long-form journalism and high/low take on culture, as pioneered by Tina Brown, is a vehicle for that engagement. And the fact that the magazine isn’t focused on fashion helps it stand out from competitor s because advertisers aren’t only focused on credits and coverage, he says.

But now, brands want to see that Vanity Fair is attracting the next generation of fashion consumers too.

“That's what we're in the middle of showing them,” says Mitchell. “These are the ways that we take this iconic brand and we continue to evolve it… All of this is relevant to the evolution of not just the media landscape, but in our case the evolution of the editorship.”

Mitchell, who is also Condé Nast’s industry lead for fashion and entertainment, is looking forward to introducing Jones to clients in Milan and Paris. He says that the way Jones and Nasr are rethinking the way the magazine’s approach to covering fashion and style — more forward-looking, adventurous, younger, diverse — is reflective of changes within the industry, which is tapping into the current zeitgeist of inclusivity and diversity.

“There's something interesting to me in the combination of fashion and personal expression that I think is very key to the way that celebrity works now, where you have different perceptions of what glamour even is and different perceptions of what authenticity is,” says Jones. “The fashion world is such an interesting world of personality and power and creativity. Those are topics that we specialise in.”