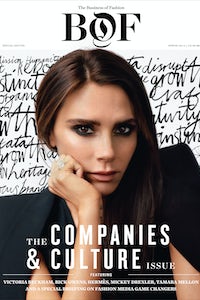 LONDON, United Kingdom — Victoria Beckham’s private office in the London headquarters of her fledgling fashion brand, just south of the river Thames in Battersea, is a calm oasis of earthy hues and understated designer furniture. But just outside her door, spread across two floors and two separate, fully-staffed ateliers — complete with in-house patternmakers, sewers and cutters — is a buzzing office with more than 100 people working across design, product development, sales, marketing, operations and finance.

It’s not at all fancy. There are piles of boxes everywhere and mismatched desks are crammed together in every which way. Phones are ringing off the hook and couriers are trailing in and out, with delivery after delivery. A fabric meeting is taking place in the reception area as all the other meeting spaces seem to be fully occupied.

“I’ve only actually just had an office that has windows. I was downstairs in the cupboard!” Ms Beckham jokes as she shows me around the office. “There are no airs and graces here. Nobody treats me as if I’m a famous person. It is what it is.” The crowded workspace has all the signs of a rapidly growing young fashion company.

The Victoria Beckham business turned over a respectable £30 million in sales (about $50 million) in 2013, an impressive 91 percent increase on the year prior, according to figures provided by the company.

But critically, Beckham has also managed to create a brand profile that is significantly larger than the current scale of her business. Recently, she has been everywhere. In December, Beckham guest-edited edgy Vogue Paris and appeared on two smouldering cover spreads with her football star husband David. (In total, Beckham has appeared on the cover of nine different international editions of Vogue, with the notable exception of the American edition.) Then there were two simultaneous Vanity Fair covers in Italy and Spain in January, the March cover of Allure in the United States, and a ubiquitous collaboration with Skype, documenting her personal fashion journey. How many other designers can regularly land cover stories on fashion magazines around the world?

“It’s a double-edged sword really,” says Beckham, when asked what role her fame has played in the success of her business. “The most valuable part of being famous is that you have a voice and people will listen. I mean I can get a lot of attention. I don’t have to rely on advertising campaigns,” she admits. “But I don’t like to use that card very often. I like to keep my head down, work hard, focus on what I’m doing business-wise. I like to try and control how much I’m seen. I don’t want to go out and be photographed every day, you know.”

“So, I think that as much as one might say, ‘it has helped,’ I’m not so sure,” she says, “I’ve had to overcome lots of preconceptions, and that’s okay.”

Indeed, it would be too simplistic to credit Victoria Beckham’s phenomenal rise in fashion to the power of her celebrity alone. For years, Beckham actively courted the fashion industry, making red carpet appearances in high-end designer clothing and gaining global media attention on both sides of the Atlantic, simply by going about her day-to-day life.

But she was shunned. Insiders remember a time when brands would call her representatives to ask that she please not wear their clothes, even if she had bought them herself. They did not want to be associated with the perky breasts, pouty poses and over-dyed blonde bob that had come to define her style in the post-Spice Girls days.

But like a chameleon, Beckham has a knack for transforming herself. From ‘Posh Spice’ to football ‘WAG’ to celebrated fashion entrepreneur, her ability to successfully adapt her appearance has also been key to her success.

Today, she is the epitome of chic understatement, dressed in a beige cashmere sweater, open at the back, with worn-in black Victoria Beckham jeans and knee-high black leather Saint Laurent boots. Her makeup is restrained, with dark kohl around the eyes, and little else. Her only accessories are a statement gold Rolex watch and an impossible-to-miss emerald cut yellow diamond ring by Chopard. The only signs of her days as a rebellious and coquettish pop diva are the twin tattoos on her wrists, peeking out from underneath her sleeves.

But perhaps even more important than the physical transformation that took place for all to see, was the personal transformation that she was undergoing in terms of her own taste level and aesthetic. Today, if Beckham can rattle off designer names, construction techniques and fabric specifications in detail, it is because of the effort she has made to learn about clothes, brands and the business.

“For a long time there, I was a bit of a laughingstock,” she acknowledges. “And while everybody was busy laughing, what was I doing? I was laying the foundation to what I have in place now.”

Beckham’s first foray into fashion was through a series of licensing arrangements with Linda Farrow for eyewear, rock & republic for denim, Coty for fragrances, and Samantha Thavasa, a Japanese label known for its accessories collaborations with celebrities including Paris Hilton and Beyoncé Knowles. None of these collaborations could be described as luxury or high fashion, but they gave her basic training in how the fashion business works.

“At the time, I wanted to design and the opportunities came up to work with these people. They had the setup so I went in as a designer and I loved it,” she recalls. “I learnt an enormous amount about how I like things to be done and maybe how I would do things differently, myself. It was an incredible experience.”

But in the end, these deals really just boiled down to a form of celebrity endorsement, and after awhile Beckham says she realised she wanted something more. She wanted to be a part of the creative process, the business decisions, everything.

To read the full story, pre-order your issue of the second special print edition of The Business of Fashion here.