The RealReal could be ready IPO within two years, when it expects the value of goods sold on the site to reach $1 billion annually, and is also in talks with LVMH and Kering over potential partnerships. 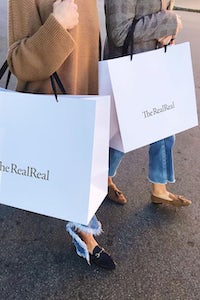 The RealReal could be ready IPO within two years, when it expects the value of goods sold on the site to reach $1 billion annually, and is also in talks with LVMH and Kering over potential partnerships.

Sales of second-hand, or vintage, luxury goods — from Chanel handbags and Gucci dresses to Rolex watches — are thriving on dedicated web platforms that are drawing a younger clientele seeking bargains and championing recycling.

The RealReal could be ready to list on the stock market within two years, when it expects the value of goods sold on the site to have roughly doubled to $1 billion annually, its founder and chief executive told Reuters.

The seven-year-old US company is also in talks with high-end brands like Louis Vuitton parent LVMH and Gucci owner Kering over potential partnerships, Julie Wainwright said.

Luxury labels have hitherto shunned the second-hand trade, fearing diluting their exclusivity and cannibalizing their sales. But they are now finding it hard to ignore a second-hand luxury business that is worth $25 billion in annual revenue and is expected to grow by up to 10 percent annually in coming years, according to Berenberg analysts.

That is more than twice the projected pace of growth of the much larger primary market.

While there are few indications so far that they are planning in-house ventures, brands including LVMH and Kering are now talking to vintage sites as they try to figure out how they might extract some value from the burgeoning sector, The RealReal and executives from other resellers said.

LVMH did not return requests to comment. Kering has said it is "testing things with The RealReal," without elaborating.

Friend or Foe to Brands?

Second-hand platforms make their money by taking a cut of the resale price of an item, anything from 10 percent to 50 percent depending on the product and how much the seller has sold via the site.

The RealReal is facing growing competition from rival resellers looking to cash in on the booming market, including thredUP, which branched into luxury last year, and established players like Vestiaire Collective.

For The RealReal and its rivals, partnerships with big brands could raise their profile and give them an edge.

They declined to disclose details about the tie-ups they were discussing. But some executives, including Vestiaire chief executive Sebastien Fabre, said deals could include data-sharing that allow brands to track what kind of people were buying and selling their products, and how items' value was holding. Such information could inform their marketing campaigns and pricing.

The RealReal's existing partnership with British label Stella McCartney could also serve as a model.

The brand actively encourages shoppers to recycle its clothes by offering $100 vouchers, half paid for by The RealReal, to spend on new products in stores for every old Stella McCartney item they sell on the site.

Resale platforms are betting most luxury firms will prefer to opt for strategic alliances rather than to go it alone, in part because the logistics of second-hand sales can be daunting.

Resellers said labels were also increasingly convinced by their argument that rather than threaten luxury sales, they may help funnel money back to brands.

The RealReal's Wainwright said about a fifth of the money that sellers made was spent on buying items on the site, suggesting a significant proportion might go back into the broader apparel market.

"I think we're past the point where they may have felt we were a threat," she said. "For many millennials it's their first-time experience with a luxury brand on our site."

'I Also Shop at Prada'

The RealReal has a 100-strong team of anti-counterfeiters to weed out fakes, and processes between 200,000 to 300,000 products a month. Vestiaire, which also works with authenticators, adds 6,000 new products a day to its site, after 30 percent of all items submitted for resale are rejected.

Prices and discounts vary considerably, with determining factors including the condition of the item and how in demand a brand if at that moment.

Yet some things hold their value or even fetch premiums second-hand. A maroon Hermès Birkin bag made of ostrich leather from 2009 is on the RealReal at 21,130 euros when its 2017 retail price as a new product was around 15,000 euros.

In New York's Soho district, Chinese student Fan Tu shopped for pre-owned items from Prada and LVMH label Céline at The RealReal's store — its first, with a second due to open in Los Angeles in August.

Tu, who had raised about $4,500 from selling used clothes via The RealReal this year, said she was not just after bargains — rather anything that caught her eye from her favourite labels, new or old.

"I also shop at Céline, right across the street, and at Prada, two blocks away," she said, clutching a pair of her old Chanel boots and Dolce & Gabbana loafers destined for resale.