The accessories and special projects director will be the app's first head of fashion and beauty partnerships, taking up a role similar to that of Eva Chen at Instagram and Derek Blasberg at YouTube. 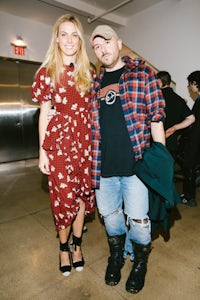 The accessories and special projects director will be the app's first head of fashion and beauty partnerships, taking up a role similar to that of Eva Chen at Instagram and Derek Blasberg at YouTube.

Selby Drummond — a longtime American Vogue editor and its current accessories and special projects director — is leaving the magazine to join Snap, the parent company of Snapchat, where she will head fashion and beauty partnerships in a newly created role.

In recent years, social media platforms have poached fashion insiders to liaise with the industry on their behalf. They cultivate relationships with brands and celebrities, help them create direct relationships with audiences and, hopefully, encourage them to spend more money on advertising.

Instagram’s Eva Chen, head of fashion partnerships for the image and video sharing app, took up this kind of role when she joined the app in 2015 shortly after leaving Condé Nast’s now-defunct Lucky magazine, where she had been editor-in-chief. In June 2018, YouTube hired writer and CNN Style host Derek Blasberg to also lead a newly formed fashion and beauty content partnerships division.

Starting in mid-October, Drummond will report to Snap’s head of talent partnerships Lauren Gallo, who joined the company in March from Apple, where she was the senior brand and marketing strategy lead.

"We are thrilled to welcome Selby Drummond to the Snap family as our first-ever head of fashion and beauty partnerships,” said Snap’s vice president of content, Nick Bell, in a statement. “Selby will lead all strategy and outreach efforts to support fashion designers, creators and influencers in those spaces, and will work closely with Snap's advertising and business solutions teams. She will also lead Snap's engagement efforts around major events in the fashion and beauty worlds.”

In her seven years at Vogue, Drummond became a public-facing ambassador for the magazine, especially through her work overseeing Vogue’s role in the annual CFDA/Vogue Fashion Fund and guiding the designer finalists throughout the five-month competition. While at the magazine, she also worked on product collaborations on behalf of Vogue with Off-White, Kith and other brands.

While sources say Drummond will be replaced, a representative for Vogue said her responsibilities will be redistributed among the Vogue market team by fashion director Virginia Smith. Market editors Alexandra Michler, Willow Lindley and Grace Givens will expand their remits and Michler will now oversee the CFDA/Vogue Fashion Fund.

Drummond’s departure from the publisher follows that of another young leader, Phillip Picardi. The chief content officer of both Teen Vogue and Them announced in August that he is leaving to become editor-in-chief of Out Magazine. Meanwhile, Condé Nast is trying to cut losses and diversify its revenue streams as media consumption moves online and demand from print advertisers continues to decline.

Snapchat has had a challenging year, especially after a February redesign alienated some users. In the second quarter of 2018, Snap's daily active users  (188 million) were up 8 percent year over year, but down 2 percent from the first quarter of 2018.

The company has charged forward with new initiatives to generate more advertising revenue and shore up its fiercely, loyal and younger audience in the face of increased competition from Instagram, which released its own version of Snapchat’s core functionality with Instagram Stories in August 2016.

In 2018, Snap has started to share more audience data with its most popular and prominent users and brands, offering native e-commerce functionalities that allow users to make purchases through ads, augmented reality lenses, celebrity accounts and Snapchat shows. Last week, for example, the app partnered with Adidas and fulfilment company Darkstore to pre-release a new style of the Adidas Originals Falcon W sneaker during a new Snapchat show called Fashion 5 Ways. The launch sold out in six hours.

In addition, Snapchat continues to create content for the fashion industry’s biggest moments, such as the Met Gala and fashion month, and has partnered with Virgil Abloh, Jeremy Scott and other designers on custom lens and stickers.