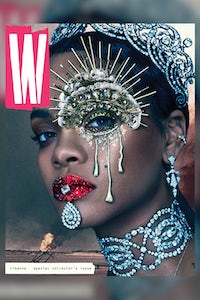 NEW YORK, United States — “With all the things that are happening, I thought it could be fun to hand make a magazine,” says Terry Jones, founder of British style bible i-D, who was invited by W editor-in-chief Stefano Tonchi and creative and fashion director Edward Enninful to art direct the September 2016 issue of the Condé Nast publication. “All the things,” of course, is Jones’ way of saying the technology sea change that has utterly transformed — and threatened — traditional publishers over the past decade, precipitating change across the industry, including the 2012 sale of i-D to Vice Media, which turned the property into a digital video brand.

To be sure, the biggest impact of Jones’ efforts on the W project can be seen in the issue’s dual covers, featuring Rihanna photographed by Steven Klein, cast as a queen in wartime and peacetime, nodding to both the 40th anniversary of the emergence of punk and the 90th birthday of Britain’s Queen Elizabeth II. At peace, she’s rendered in black-and-white. At war, the scene is in full colour, a burning sky in the backdrop with rubies encrusting her lips and liquid gold tears streaming down her left cheek. On both covers, she’s wearing a Cartier tiara with a matching choker and earrings so bold they almost look like paste jewellery. (The jewels were flown over from the UK to New York by five members of the Cartier team.) In the bottom left hand corner, a single cover line — “Rihanna Special Collector’s Issue” — has been taped on, and the W logo stencilled in right above it. 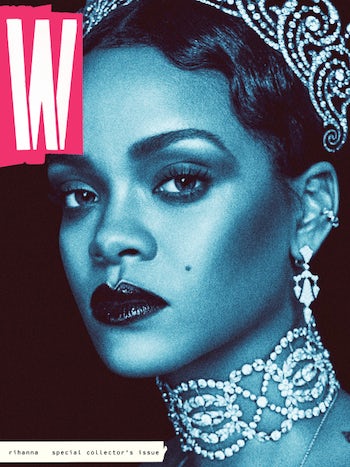 Rihanna as a queen during peacetime | Photo: Steven Klein/Courtesy

“It almost has a graphic novel vibe to it,” says Jones, who started designing the cover by taping over elements of last September’s issue. The cutting and pasting, in this case, did not require a computer. “There was this kind of sense of making something that would be a totally memorable moment in the life of the magazine. Creating covers has always been really important.”

While the partnership with Jones will be a one-off, the project marks the beginning of a new creative approach at W. Tonchi, who joined the title from The New York Times' T magazine in 2010, restructured the art department at the beginning of 2016, bringing on V magazine’s Cian Browne as art director and initiating a programme where the team would work with a guest collaborator for the magazine’s September and March fashion issues. “It’s part of the larger strategy to make every issue of the magazine a collectible — to create print as an event,” Tonchi says. “Yes, we are larger [in trim size] than the other publications. We are different, but it’s never enough. I somehow wanted to push a little farther. So we got this idea of hiring a legendary art director to work with us.”

It’s part of the larger strategy to make every issue a collectible — to create print as an event.

Jones was an obvious choice, given his longstanding relationship with both Tonchi and Enninful, whom Jones hired as fashion director of i-D when he was just 18. “I have an affinity with Terry, he’s been a mentor to me and I grew up looking at i-D,” Tonchi says. “But I didn’t make a decision until we saw the fall shows. I have never seen so much individuality on the runway, gender fluidity and self-expression. The message is DIY, that’s why we ended up with Terry.”

Jones’ particular eye can be felt in every bit of the issue, from the font treatments to the linked storytelling in the fashion spreads; from the Enninful-styled, Inez and Vinoodh-photographed editorial that was shot in Salem, Massachusetts — a modern reinterpretation of Arthur Miller’s “The Crucible” — to the Steven Meisel-lensed portfolio featuring transgender model Casil McArthur. A pioneer in the way he presented street style ideas to high fashion, the Craig McDean-shot, punk-inspired spread, for instance, was a “throwback” to the i-D Straight Up, all head-to-toe portraits against industrial Brooklyn walls. “That was artistic license,” Enninful says.

Tonchi emphasises that it was all done through the lens of W, using the magazine’s favourite photographers (Tim Walker and Patrick Demarchelier also contributed), stylists (including contributing editor Giovanna Battaglia) and other collaborators (like Pat McGrath Labs). For the cover story, Tonchi hired Se7en screenwriter Andrew Kevin Walker to pen a fictional short story depicting Rihanna living in a dystopian society. For the shoot, Enninful called upon designer friends of both the magazine and Rihanna — including Miuccia Prada, John Galliano and Gareth Pugh — to make custom pieces for the editorial. 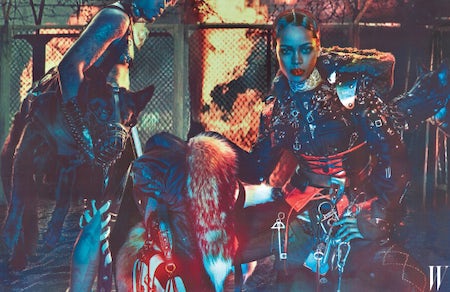 The scale of the production sounds like a reversion to a more carefree and less budget-conscious time for fashion magazines. And while W’s masthead is certainly lean — especially when compared to other Condé Nast books — Tonchi continues to trumpet, and fight, for creativity over shortcuts. “[W] is not a collection of stuff picked up here and there,” he says. “I think a cohesive vision is what makes a magazine.”

To be sure, W’s unofficial status as a niche title within a company that mostly operates mass publications has perhaps given it a bit more freedom than its counterparts, many of which have been struck by dwindling advertising revenue and diminished brand value. Positioned as a luxury publication, W’s revenue is up 2 percent in September 2016 from the same issue last year, according to a source familiar with the numbers, and 18 percent since September 2012. Since publisher and chief revenue officer Lucy Kriz joined W in 2012, the magazine is up 13 percent in print revenue and 68 percent in digital revenue, with an increase in profitability.

For Kriz, W’s unique status within Condé Nast’s portfolio makes her job different than many of her counterparts. (Her partnership with Tonchi —which was internally recognised by Condé Nast in 2014 via its Collaborative Leadership Award — is also one of envy, as the editor is known to be a favourite among advertisers.) For one, she is able to be pickier with advertisers, something not every title can afford.

“We’ve never been tied to the beast of newsstand sales and mass market,” she says. “We’re primarily a subscription brand. In print in particular, especially with the collapse of newsstand and consolidation, that means we can stay even truer to our roots or that mission of creativity and delivering something super, super special.” This September, Kriz will send a few hundred hardbound issues of the magazine — signed by Tonchi and Jones — to select influencers as well as “advertisers that participated in a big way,” she says. “It’s also a great way to proselytise the brand values.”

There’s this tension between scale and maintaining uniqueness. I think we can maintain this very special product in print and scale that voice in digital.

But while W has long been able to take cover risks — Jennifer Lawrence on its front page long before she was a household name — the book is by no means immune to market forces and the growing importance of digital. In June 2016, Wmag.com had 999,000 unique users, according to Comscore. Internal numbers pulled from Omniture are, as always, significantly higher, averaging 1.7 million unique visitors and 10 million page views per month. But according to the Magazine Publishers of America’s 360 report — which tracks brand performance across all categories — W's total audience was up 29 percent in May 2016 from the year previous, with print and digital edition viewership up 2 percent, web traffic up 58 percent and mobile traffic up 132 percent. The brand has over 7 million followers on social media, over 2 million of which come from Instagram.

Perhaps that’s why it has pushed harder on the digital side as of late, relaunching its website in late July and adding headcounts to the team. “We play the game,” Tonchi says, citing the magazine’s particular success with video as a key to its digital strategy. “Because of that, we believe that the [physical] magazine needs to be something that still surprises.”

Kriz compares this to the challenges of luxury brands as rarefied entities now communicating with mass audiences. “There’s this tension... between the scale that is also really important to how we push this brand forward and maintaining uniqueness,” she says. “I think we can do it by maintaining this very special product in print and scaling that voice in digital.”

And while Tonchi and his team will say goodbye to Jones after September — “I’m already thinking about who we will use next March,” Tonchi says — the project may have set a precedent. “I think the issue reflects a moment in time, the zeitgeist,” Jones says. “The value of print should never be forgotten. Something that looks like a clothing catalogue doesn’t have value.”