What Really Happened at the Balenciaga Casting?

James Scully made good on his promise at VOICES to name those who engage in the 'cruel and sadistic' abuse of fashion models, citing an incident at last Sunday's Balenciaga casting. Now one of the accused is firing back. 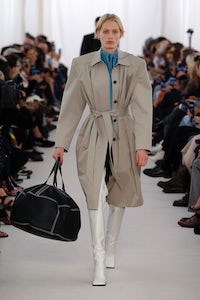 What Really Happened at the Balenciaga Casting?

James Scully made good on his promise at VOICES to name those who engage in the 'cruel and sadistic' abuse of fashion models, citing an incident at last Sunday's Balenciaga casting. Now one of the accused is firing back.

PARIS, France — At the end of a powerful talk at BoF’s VOICES gathering in December, casting director James Scully offered an ultimatum: if he continued to see evidence of the bullying, cruelty and discrimination rife in fashion's modelling industry, he promised to name and shame the perpetrators publicly on social media.

On Monday, true to his word, Scully became fashion's whistle-blower, taking to Instagram to publicly address an incident at a recent Balenciaga casting at the company's Rue des Sèvres headquarters the previous day. Casting directors Maida Gregori Boina and Rami Fernandes reportedly left more than 150 girls waiting for over three hours in a dark staircase without light as the duo left the building and went to lunch.

The post was shared by hundreds of fashion industry professionals and, at press time, had received more than one thousand comments and seven thousand likes, with several models and other industry insiders including Antoine Arnault, Carolyn Murphy and Joan Smalls voicing their concern.

Balenciaga, which is owned by the French luxury conglomerate Kering, quickly terminated its relationship with Boina and Fernandes on the day of Scully's post, issuing a statement that said the company was “making radical changes to the casting process, including discontinuing the relationship with the current casting agency” and that it had sent “a written apology to the agencies of the models who were affected by this specific situation."

In a separate email to BoF, Balenciaga chief executive Cédric Charbit expressed deep regret at what happened at the Sunday casting session, adding that the company had been “taking this issue seriously for the past two days” and that he had “also reminded [everyone] internally that this is not us and cannot happen again. From now on we will hold casting in our showroom like we always did in the past seasons. Days two and three of the casting (Monday and Tuesday) were aligned with our standards and no issues were reported.“

Now, in an exclusive statement provided to BoF, Maida Gregori Boina has issued a rebuttal, denying Scully’s allegations, which she called "inaccurate and libelous" and shifted the blame to Balenciaga for the poor conditions at the casting.

“It is important to stop the spread of rumours and set the record straight,” Boina wrote via e-mail. “To directly address these accusations, the models did not wait for three hours in the dark, not even one hour. We personally ate our lunch in the casting facility and — without question — we did not lock the models in the stairwell and turn out the lights. That would be completely inhumane. Throughout the entire process, we provided the most comfortable accommodations allowable based on the facilities provided.”

Boina added that over a period of 10 hours they considered approximately 150 models to fill 57 slots, seeing eight models at a time to expedite the process. She also noted that the building’s electricity went out "for a period of time" late Sunday evening — a detail that was confirmed by Charbit — and that the reception area of Balenciaga's headquarters was unavailable and hence models were made to wait on a staircase.

She continued that she was “saddened to be released from the casting without a discussion of what actually took place” and that Balenciaga “provided us with the casting facility, and its senior staff was present and actively involved at all times."

So true to my promise at #bofvoices that I would be a voice for any models, agents or all who see things wrong with this business I'm disappointed to come to Paris and hear that the usual suspects are up to the same tricks. I was very disturbed to hear from a number of girls this morning that yesterday at the Balenciaga casting Madia & Rami (serial abusers) held a casting in which they made over 150 girls wait in a stairwell told them they would have to stay over 3 hours to be seen and not to leave. In their usual fashion they shut the door went to lunch and turned off the lights, to the stairs leaving every girl with only the lights of their phones to see. Not only was this sadistic and cruel it was dangerous and left more than a few of the girls I spoke with traumatized. Most of the girls have asked to have their options for Balenciaga cancelled as well as Hermes and Ellie Saab who they also cast for because they refuse to be treated like animals. Balenciaga part of Kering it is a public company and these houses need to know what the people they hire are doing on their behalf before a well deserved law suit comes their way. On top of that I have heard from several agents, some of whom are black that they have received mandate from Lanvin that they do not want to be presented with women of color. And another big house is trying to sneak 15 year olds into paris! It's inconceivable to me that people have no regard for human decency or the lives and feelings of these girls, especially when too too many of these models are under the age of 18 and clearly not equipped to be here but god forbid well sacrifice anything or anyone for an exclusive right? If this behavior continues it's gonna be a long cold week in paris. Please keep sharing your stories with me and I will continue to to share them for you. It seems to be the only way we can force change and give the power back to you models and agents where it rightfully belongs. And I encourage any and all to share this post #watchthisspace

But Scully is sticking to his side of the story — and in an Instagram comment, at least one model, Judith Schiltz, has confirmed that she did wait for three hours in a stairwell at the casting. Speaking to BoF, Scully was keen to add that the casting duo's alleged behaviour fit a wider pattern. “What Maida and Rami did, they have been doing for a long time,” he said. “They are the king and queen of abuse. I’ve heard stories from girls who were left waiting for so long without food or water that they ordered a pizza, and Maida came out and started shouting at them and calling them pigs.”

The duo's pattern of behaviour seems to be corroborated by several comments on Scully’s original Instagram post. Former model Mollie Gondi wrote: “Maida would request me season after season to do the exact same thing. Lock me in a room for 3 hours while everyone panicked, only to never, ever book me. The apology to the agencies from the fashion house is laughable because the agents have known this for years and don’t think twice because they want their girl in the show.”

Scully made clear the Balenciaga incident was only the tip of the iceberg in a modeling industry rife with abuse. However, he believes change is possible in several areas. Along with major brands developing and enforcing clear regulations, he suggested that modelling agencies could refuse to work with those who are known for bad behaviour. “If five agencies stop working with you, your career is over,” he said. “That’s all it takes and there have been some cases of agencies refusing to work with people, which is great.”

“I don’t know where it comes from other than ego and power,” he added. “All of them are competing to be the most powerful, and display egotistical meanness along the way. It is truly rampant in the industry.”

In the same Instagram post, Scully also called out Lanvin for issuing a mandate to model agents not to send non-white models to the casting for its show, information which he learned from three major modelling agencies in Paris: Diva, Women and Next. Via email, a Lanvin spokesperson said to BoF: “These allegations are indeed very serious and completely untrue.”

Lanvin's forty-two look show, held on Wednesday, featured only two models of colour, one of which was Joan Smalls.

“First and foremost, we commend James Scully for raising awareness of the issues of ethnic diversity and the humane treatment of runway models. As a woman of colour, I am a major advocate for ethnic diversity in the industry. As recently as last year, I cast a show exclusively featuring black and ethnic models for an important house in New York. I care deeply about and am committed to the well being of models. We do, however, condemn James for posting inaccurate and libelous remarks regarding Sunday's casting for Balenciaga.

It is important to stop the spread of rumours and set the record straight. At the outset of our seasonal casting, we are provided with the collection’s mood, theme, and direction, which influences the type of models we cast and the production elements of the show, all of which is directed by the designer, stylist and/or fashion house. The pre-casting for Balenciaga took place on the mezzanine level of its Paris headquarters. Balenciaga provided us with the casting facility, and its senior staff was present and actively involved at all times. Over a period of 10 hours, we considered approximately 150 models to fill 57 slots, seeing 8 models at a time to expedite the process. Because the reception area was unavailable, the staircase entrance into the mezzanine was provided to us to line up the models. Unfortunately, the building’s electricity went out for a period of time late Sunday evening, and the maintenance staff was unable to resolve the issue. We then relocated the models to the reception area to continue the casting,

To directly address these accusations, the models did not wait for 3 hours in the dark, not even one hour. We personally ate our lunch in the casting facility and – without question – we did not lock the models in the stairwell and turn out the lights. That would be completely inhumane. Throughout the entire process, we provided the most comfortable accommodations allowable based on the facilities provided.

We applaud Balenciaga’s quick action to issue a statement to the press. At the same time, we are saddened to be released from the casting without a discussion of what actually took place. We are also very concerned that James, as a casting director himself, has intentionally misrepresented the facts for personal career gain without substantiating the story.

There is no question that there continues to be social and racial inequality in the industry. While it is extremely important to raise awareness, it is also necessary to research the source and details of any story to ensure we elevate our cause and make progress. I have witnessed a dramatically improved landscape for model diversity over my 20 years casting for major fashion houses in New York, Paris and Milan, though without question, it is imperative that we continue to raise awareness for equality and fair treatment for all models.”