FLORENCE, Italy — As consumer interest and spending in kidswear has risen — the result of demographic shifts, a rising US birth rate, older, richer parents with higher disposable incomes and the digital accessibility of the Internet — the childrenswear retail market has become increasingly competitive and crowded.

To distinguish themselves in the global market, the best childrenswear retailers are innovating in their segments. From specialist eco-buys, to concierge services, online video shopping and immersive retail experiences, in alphabetical order below BoF introduces the leading retailers in the childrenswear market. 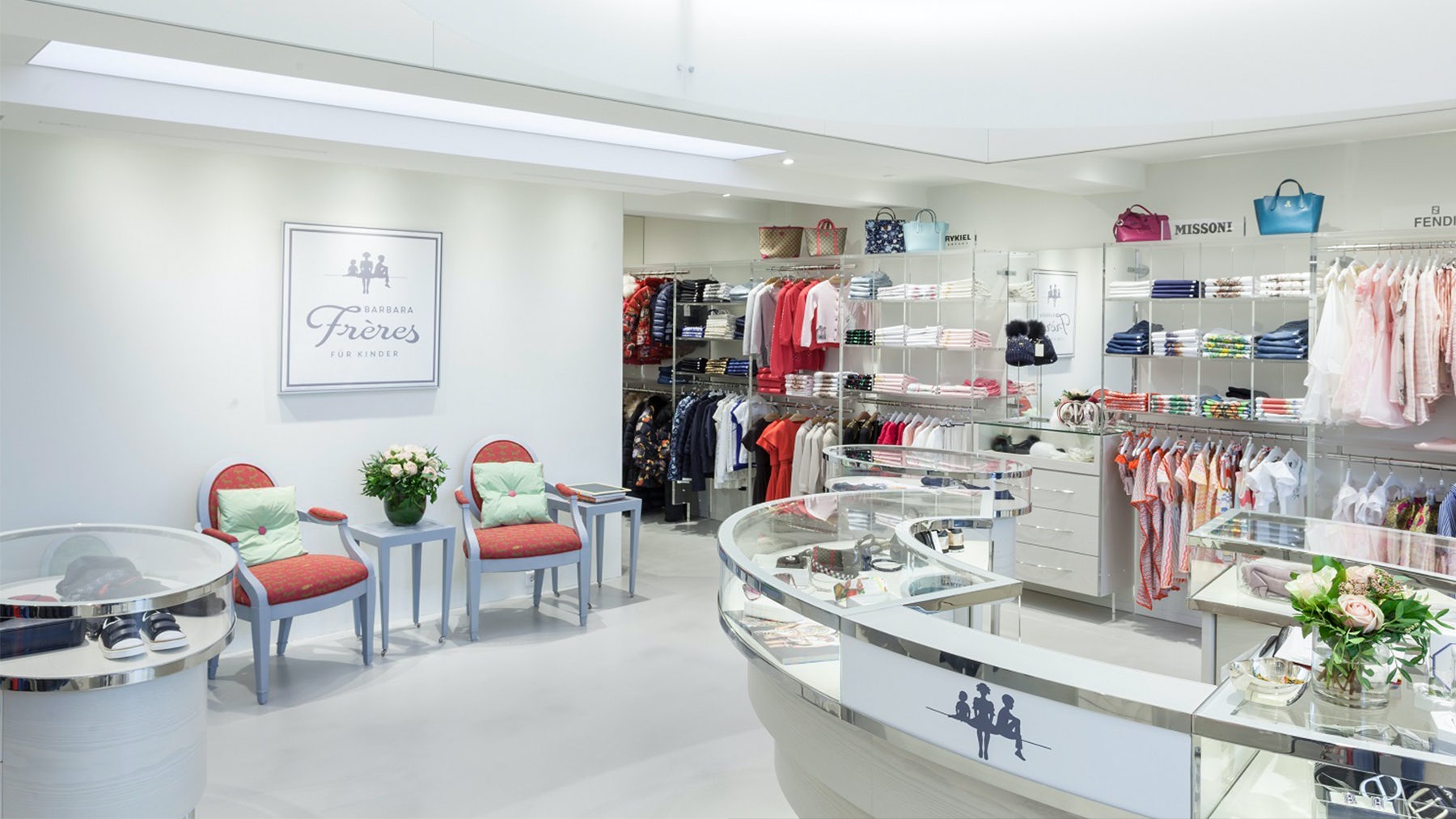 When Barbara Frères founded her childrenswear boutique in Düsseldorf, Germany in 1978, she aimed to fill a gap in the market for creative and quality children’s clothing. Within the first three weeks of its launch, the new boutique sold out and was soon dressing the likes of the daughters of the Queen of Sweden.

Forty years later and a generation later, the retailer, which is now run by Frères’ son, Philippe Frères, has expanded to three locations and offers a wide selection of international luxury childrenswear brands. It has also innovated its digital offering. Amidst the growing noise of the kidswear digital space, the retailer offers curated collections of head-to-toe looks that aim to provide a more satisfying and complete buy. With an in-store experience that already attracts crowds from around the world, Barbara Frères has also focused on its digital operations as way to open up its retail experience to a global customer base. With the recently launched Live Video Shopping Service, customers are now able to virtually shop through the store with the help of a retail assistant. 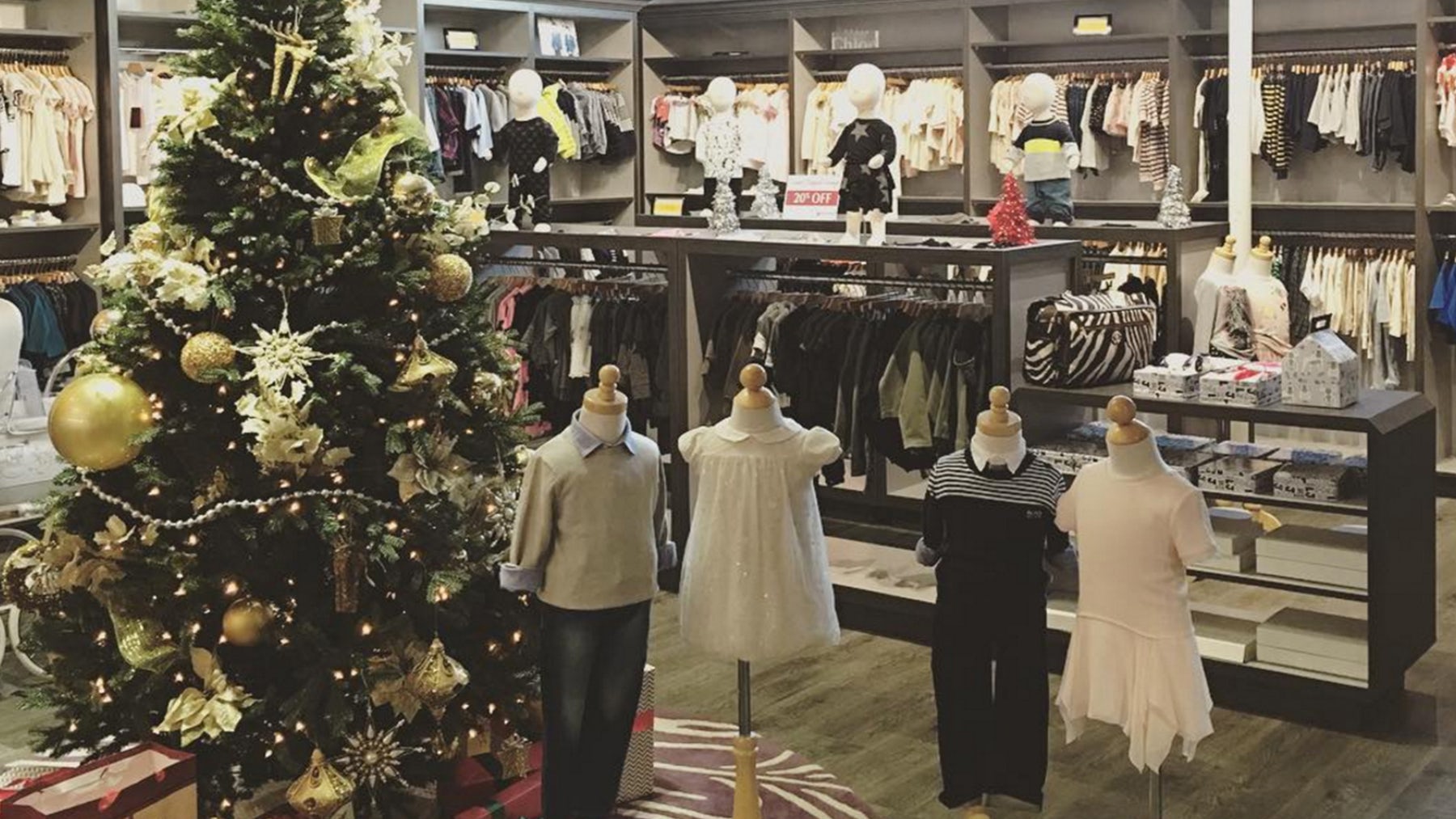 Positioned to capture the celebrity market in Los Angeles, Bel Bambini operates two stores, one in West Hollywood and another in Newport Beach. With a selection of over 300 lines, the retailer caters to high profile clientele and is often surrounded by paparazzi aiming to get shots of the likes of Kim Kardashian, Lily Aldridge and Adele. Indeed, the retailer’s roster of A-list clientele is so long, it has landed a spot on the LA star-sightings bus tours.

Its selection showcases a mix of both big designer names and up and coming independent brands. Sustainability is a key vertical in the store’s product offering — in order to meet the demand of increasingly eco-conscious parents concerned not only with the presence of chemicals in their children’s clothing, but also their origins and sourcing, Bel Bambini offers a full range of organic clothing, bedding, toys, and cribs. Although the retailer is renowned for catering to celebrity customers, it maintains it provides the same level of concierge-like service to all customers, guiding every visitor through their selection. 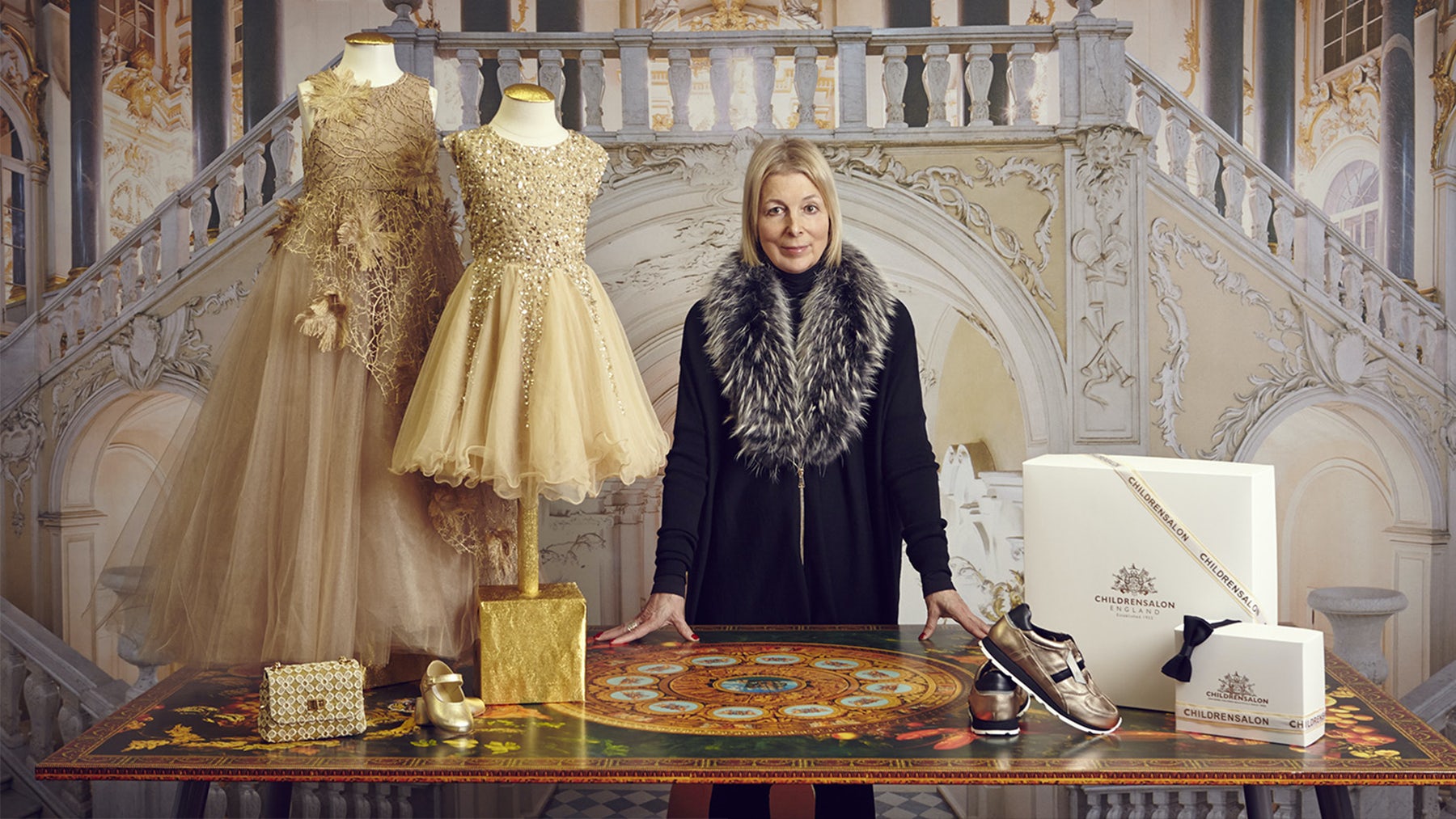 Unexpectedly, one of the world’s largest specialist childrenswear retailers began as a small brick-and-mortar store in Tunbridge Wells, a provincial English town, in 1952. Over its 65-year history, the mom-and-pop shop has grown to stock over 280 luxury designer brands online, and has built a social media following of over 300,000.

Driving the retailer’s success is its understanding of its global consumer, tapping into the style preferences of local markets and catering to each market’s granularities in taste — ranging from the demand for embroidered dresses in Russia and the Middle East, to the global desire for colorful Scandinavian prints. With a combined 80 years of buying experience, the retailer’s buying team continuously seeks to introduce new brands and feature up-and-coming designers and market innovators. With an eye to the future, the retailer projects revenues of £60 million in 2016, and in particular will target the growing number of adult brands introducing childrenswear lines. 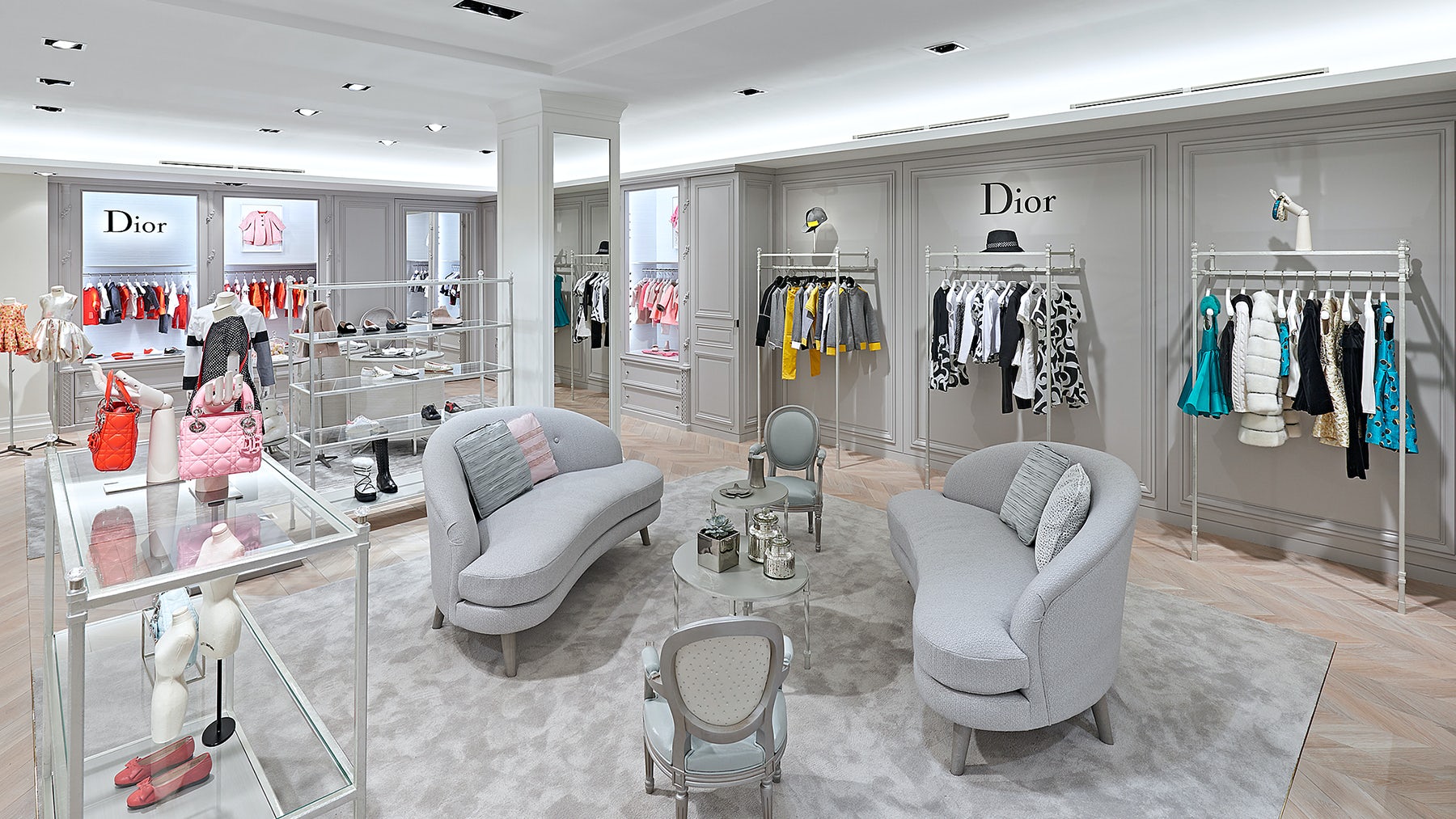 Established in 1834, the legendary London department store recently expanded its childrenswear department to 66,000 square foot, making it one of the largest selections of childrenswear in the market. The vast space, located on the fifth floor is divided into 11 “mini superbrand” rooms that are reminiscent of the men’s and womenswear floors in their design specification and creation of a brand-world within which to shop.

The department’s layout seeks to capitalise on the mini-me trend popular with some of the retailer’s biggest name partners, such as Dolce & Gabbana and Dior. Each of the boutiques offers a full lifestyle collection, from newborn clothing to childrenswear up to age 14, along with accessories and gifts. The ‘Worlds of Childrenswear’ boutiques feature all product categories and age groups in one area, making the shopping experience more convenient for clients and allowing Harrods to offer a higher standard of customer service. The retailer’s emphasis on creating complete brand spaces has positioned it as a key communications vehicle for some of the most prestigious childrenswear brands seeking to tap into London’s touristic flows. 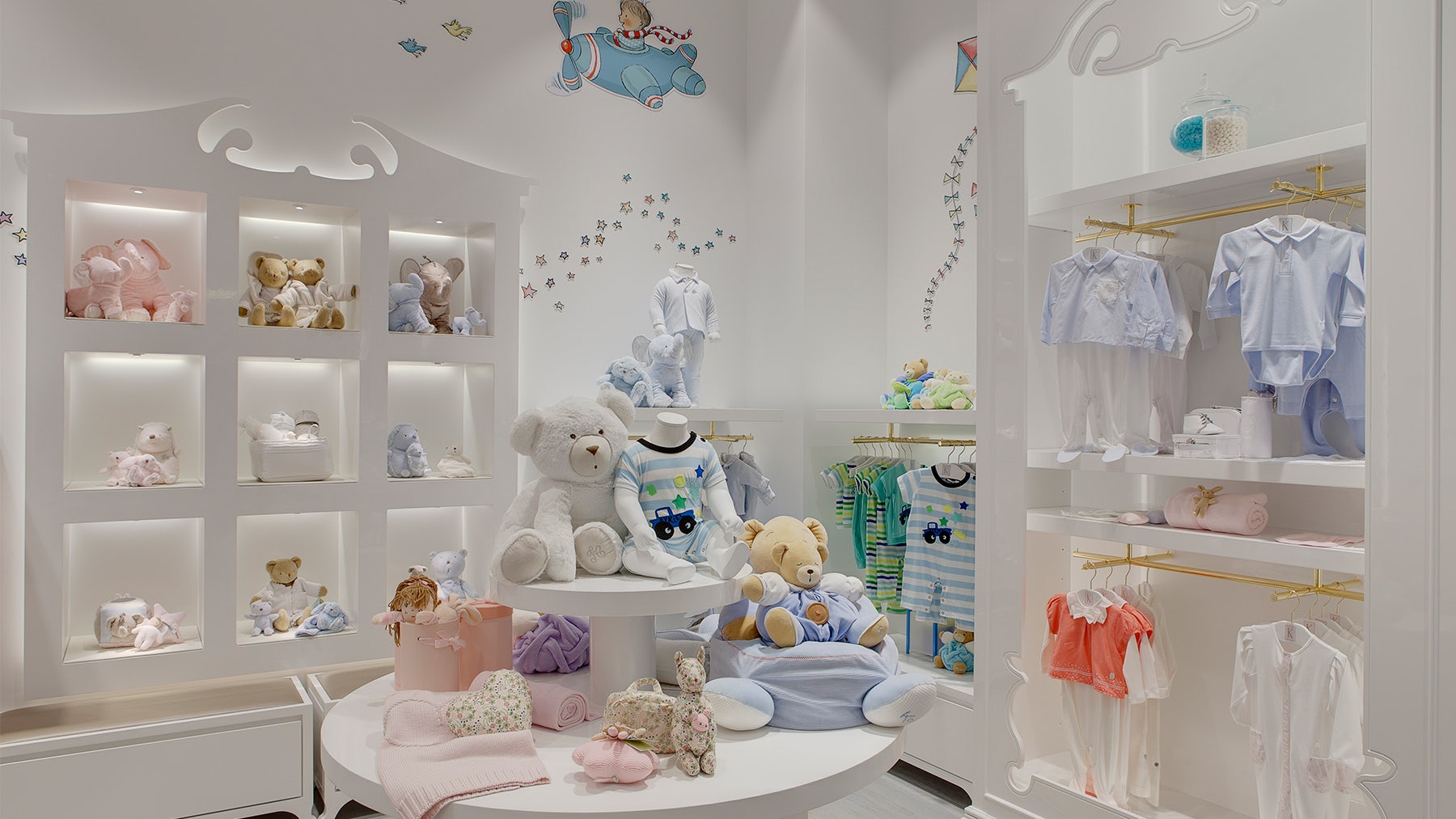 Designed as an open children’s storybook, a visit to Katakeet consists of secret doors and passageways, interactive games and a shopping experience led by Beau, Belle and Bebe — characters illustrated by renowned children book’s author and illustrator Polly Dunbar. The in-store journey is centred around an oversized digitally interactive storybook, creating a multi-sensory retail environment that uses soft technology to engage children.

Owned by the Chalhoub Group, which has a network of 650 retail stores, the boutique aims to engage its “little guests,” while their parents shop the store’s selection of luxury brands including Dior, Fendi, and Dolce & Gabanna, across product categories ranging from nursery items to clothes, to shoes and occasion wear. Appealing to the rich gift giving culture and tradition of extravagant party dresses for special occasions in the UAE, Katakeet has rapidly emerged as a key player in the regional activation of the high end childrenswear market, which grew 4 percent in 2015, with value sales of AED 8 billion (about £1.5 billion), according to a report by Euromonitor. 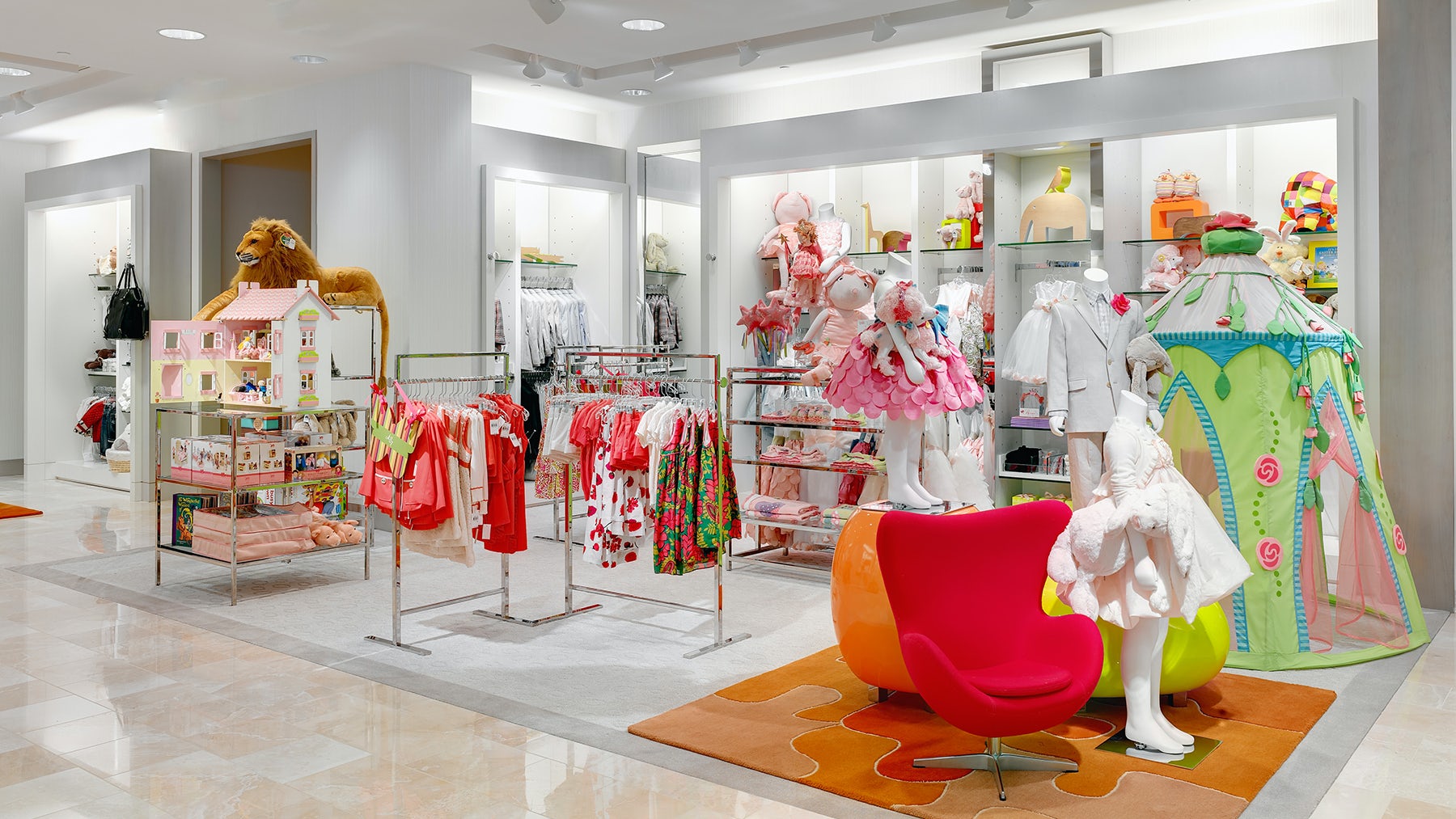 One of the most influential American retailers, Neiman Marcus, founded in Dallas in 1907, currently stocks childrenswear in 29 of its 42 full line stores, offering a selection that mixes traditional brands, classic designers and contemporary collections.

In the era of social media, celebrity kid sightings and the emergence of the “mommy blogger,” Neiman Marcus has reacted to meet the needs of the increasingly conscious childrenswear customer. Responding to the influence of Prince George and Princess Charlotte, the retailer has met the increase in demand for classic looks, as well as the continued growth of the “mini-me” trend, stocking brands such as Burberry, Karl Lagerfeld and Kenzo.

Treating each state individually for its buy, the retailer hand distributes all orders to provide each store with a custom assortment that meets local needs and strays away from a corporate matrix or schematics, while still remaining true to the core Neiman Marcus brand. 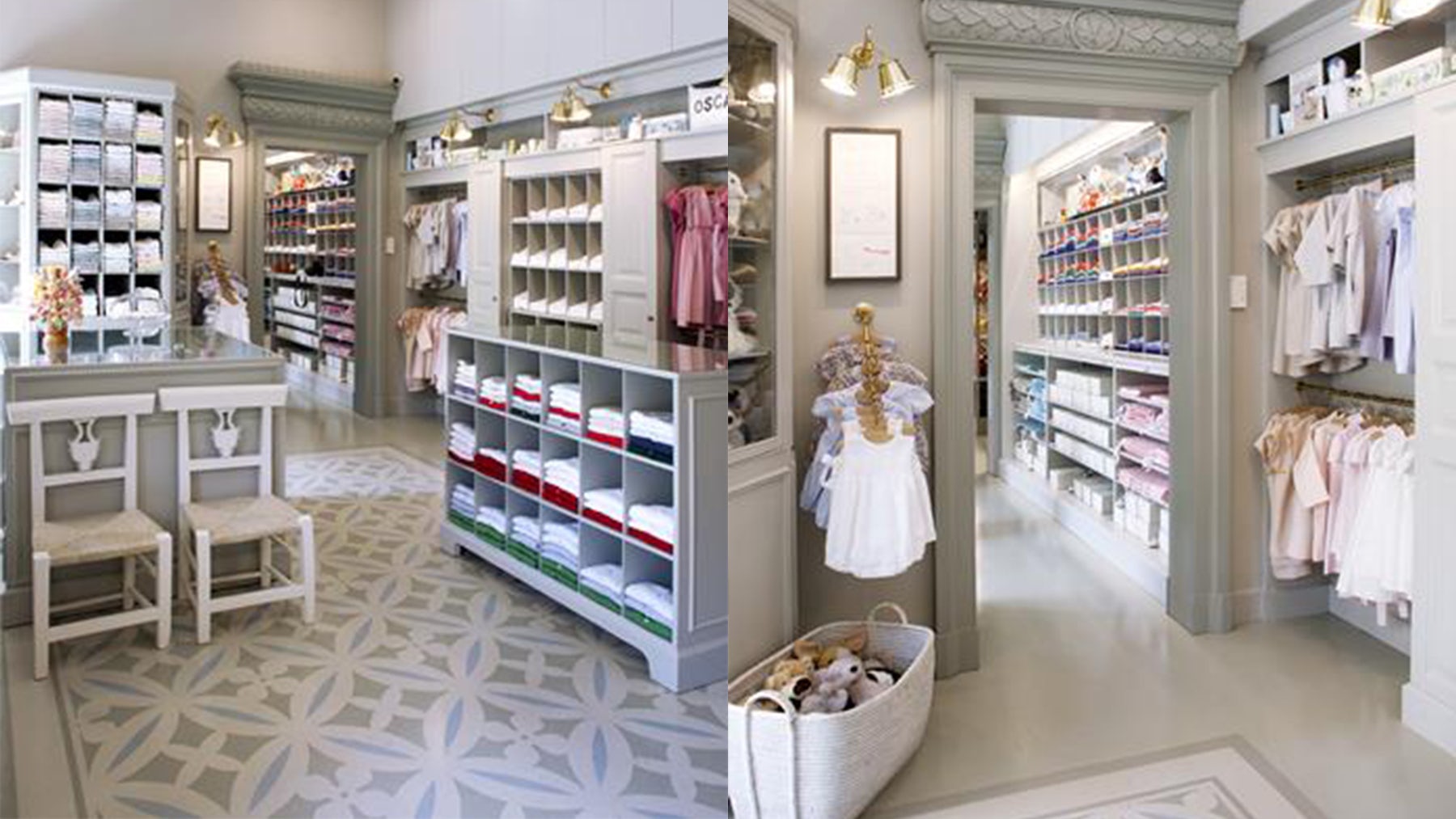 Originally hailing from the Italian city of Genova, Pupi Solari opened her eponymous childrenswear store in Milan in 1969. Since its inception, Pupi Solari has balanced image with quality, establishing itself as a point of reference for fashion in Milan and relying on a loyal upper crust customer base as well as travellers who frequently visit the store.

Pupi Solari’s childrenswear curation focuses on a combination of elegance, quality and simplicity. Rather than falling into fast trends or overly branded fashion, the retailer instead puts together collections that stick to a core aesthetic and build year on year. Although Pupi Solari is multi-brand retailer, its adherence to a unique and specific style means it’s customers associate buying the retailer’s products with buying Pupi Solari. Nearly 50 years since its opening, Pupi Solari now operates three locations, and has expanded into product categories for all of the family members — menswear, womenswear, childrenswear and bridal wear — all adhering, naturally, to the childrenswear doyenne of Milan’s personal taste. 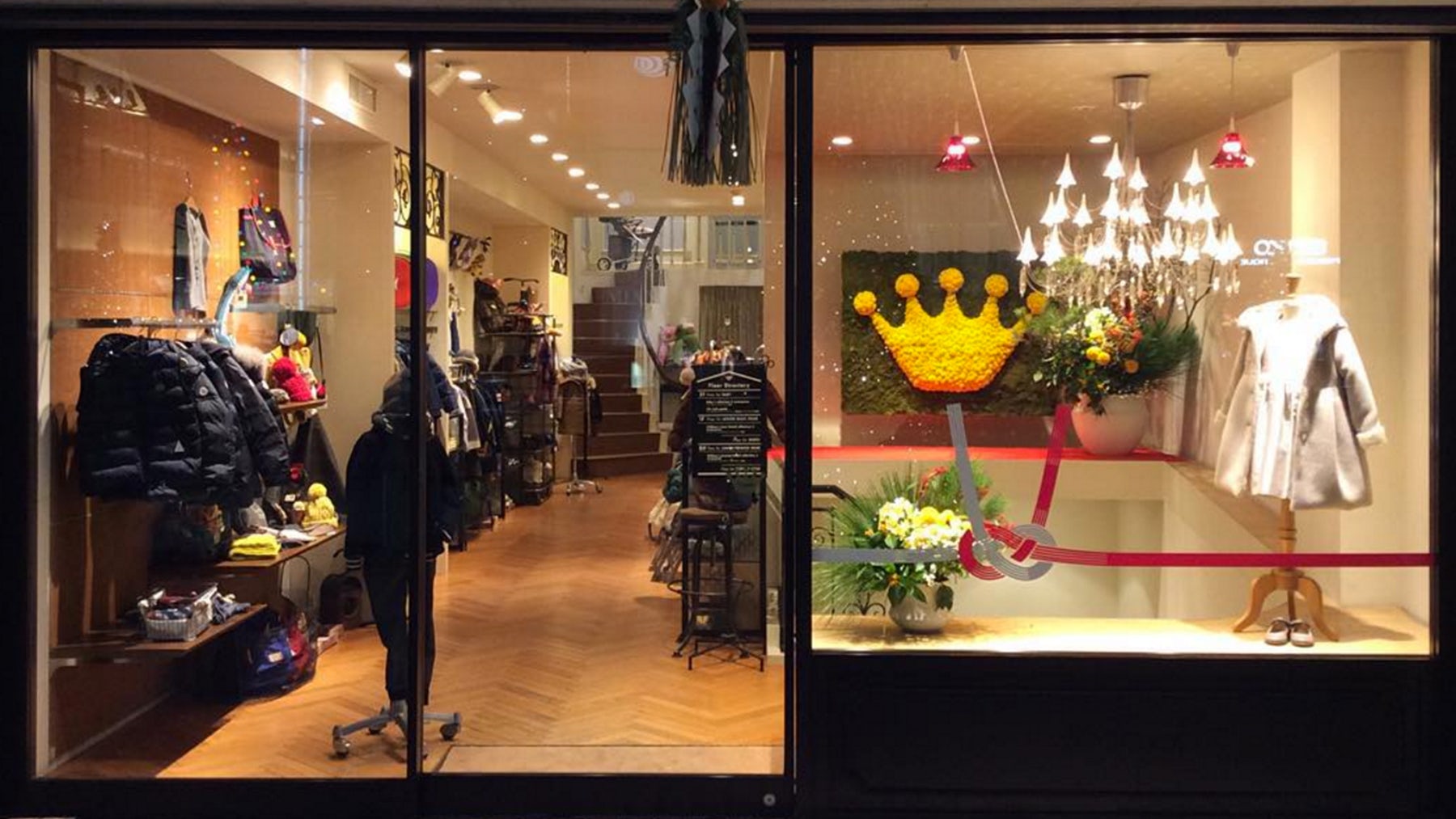 Established in 1869, the four-story Tudor-style building located in Ginza has held its position as the leading Japanese childrenswear retailer for the past 150 years, withstanding trials from the Great Kanto Earthquake of 1923 to the air raids of the Second World War.

Specialising a sophisticated and focused buy, the retailer offers top-of-the-range baby and children’s clothing and accessories, ranging from international brands like Stella McCartney and Little Marc Jacobs, to local Japanese brands, as well as a made-to-order clothing service and its own Sayegusa label.

With a long history of teaching the culture of fine attire to children and providing an elegant yet playful selection, the retailer has elevated its goal to take on the responsibility of promoting “green thinking,” using storytelling to raise awareness of environmental issues, as well as organising green activities and expeditions. 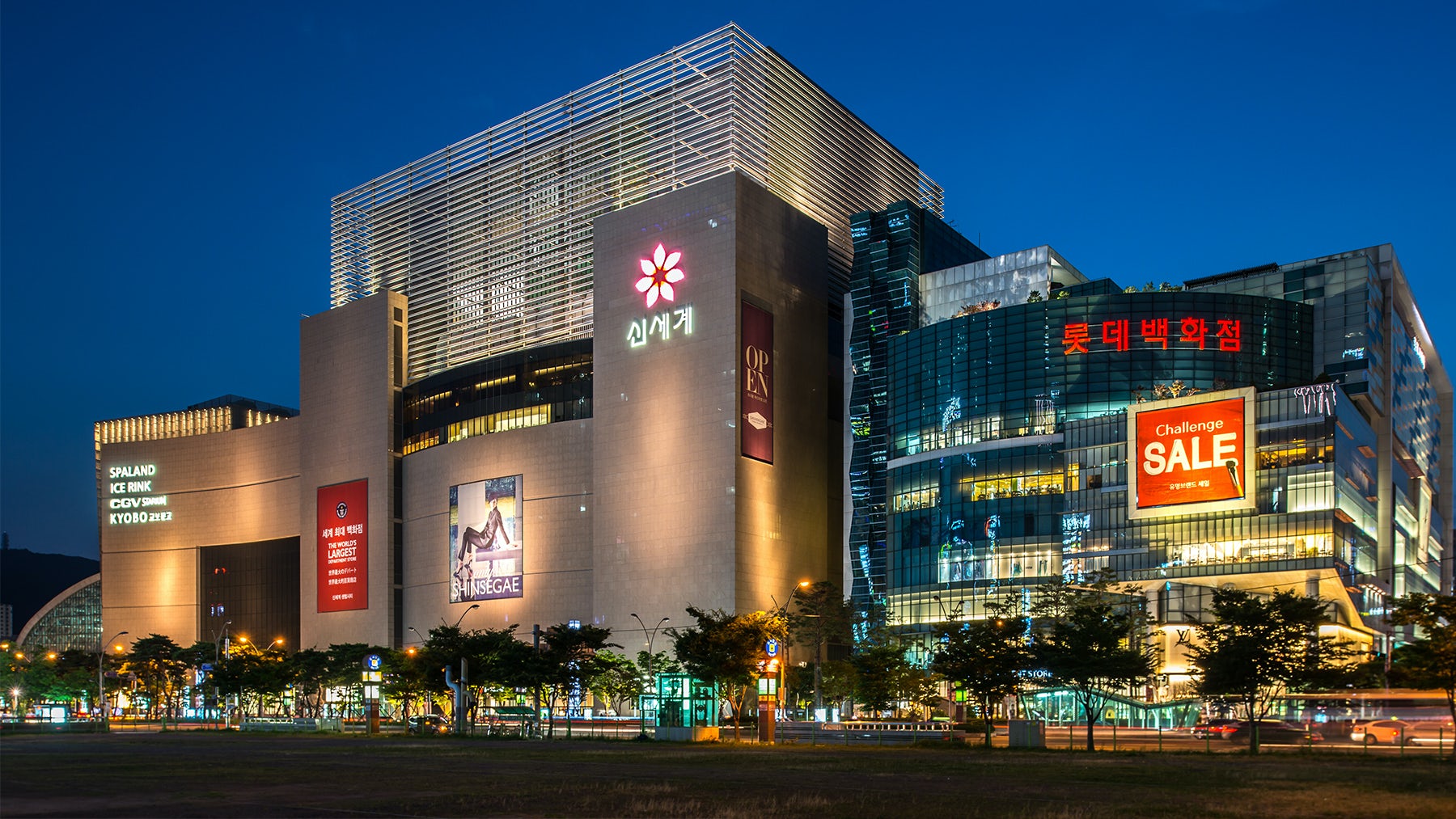 As one of the leaders of childrenswear in the South Korean market, Shinsegae has played a vital role in the rapidly expanding growth of luxury designer childrenswear. Due to increased pampering of children, resulting from spikes in disposable income and shrinking household sizes, the childrenswear market in South Korea is following the trend of the market’s overall growth in the Asia Pacific region, which was worth €44.1 billion in 2015 (over $50 billion), and projected to reach €65.1 billion (over $74bilion) by 2020.

Heavily catering to parents and their children with concierge services, the store offers a baby carriage service, a child play area, and a “toy theme park,” to make the shopping experience more enjoyable for children. 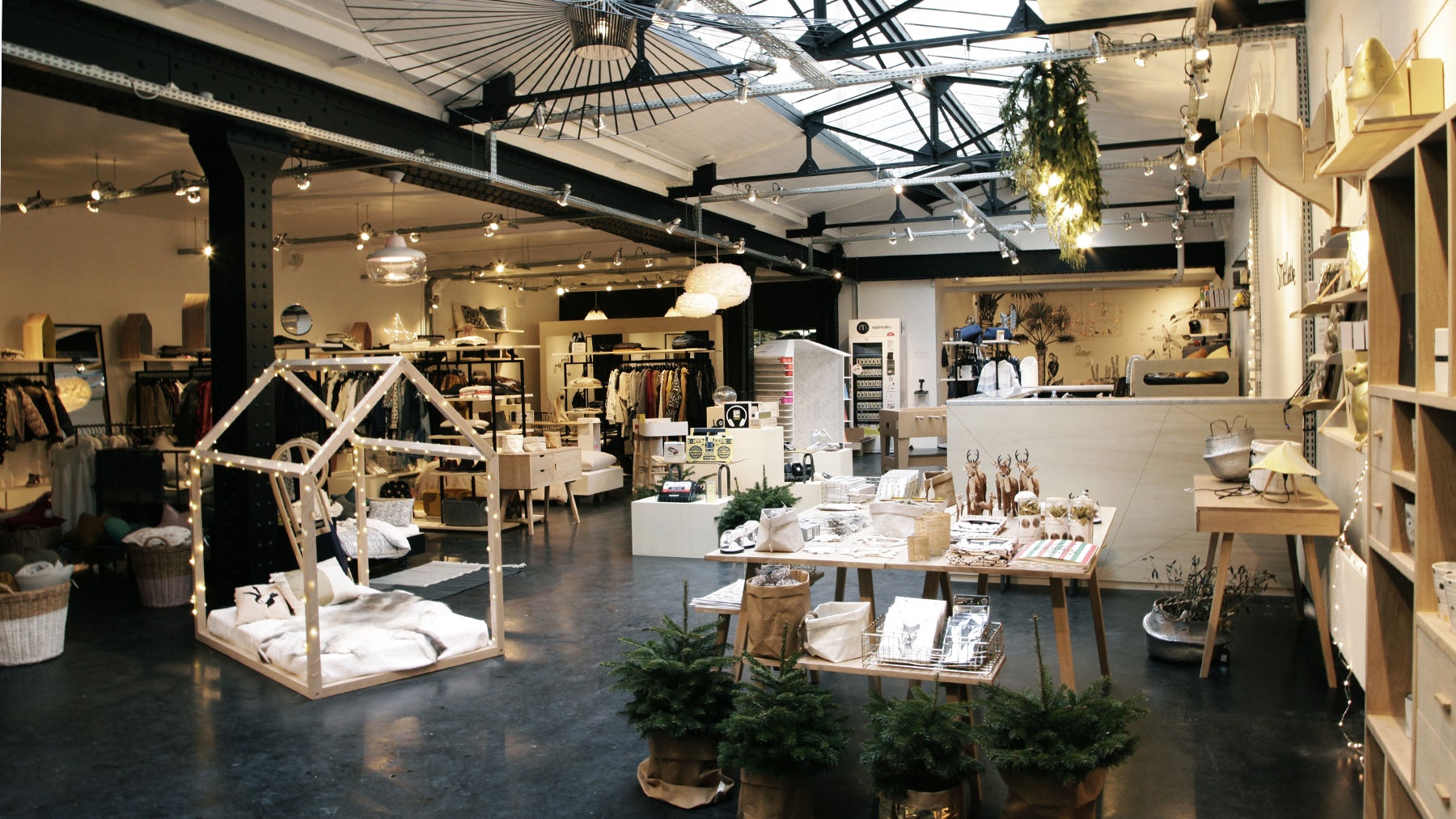 The beautifully designed Parisian concept store, nestled in Rue du Cherche-Midi, creates a shopping atmosphere more akin to an urban design centre or studio rather than a luxury childrenswear store, with its tones of black, white, and wood over pale pinks and blues.

Founded by Cécile Roederer only seven years ago, Smallable today stocks almost 500 brands and over 20,000 items, both online and its Paris-based shop. With product categories ranging from clothes to toys and furniture, the retailer ships to over 200 countries worldwide, turning over €20 million in 2015 ($22 .74 million), with 60 percent of sales coming from international markets.

Reflecting the atmosphere of its Paris-based shop, Smallable’s selection focuses on high-end in independent designers from around the world. Crafting a selection of yet-unknown but high quality and fashion forward brands, the retailer is tracing recent trends in childrenswear, which have moved away from large multinational logo brands, particularly in emerging countries like China and Russia.