MIAMI, United States — As the luxury economy continues to re-orientate itself around experiential and transformative axes, American Express is evolving its longstanding relationship with the fashion industry. Having previously worked closely with New York Fashion Week and Made, today, in addition to continuing to support flagpole global fashion events, the company now stages between 80 and 100 unique experiences around the world for its Platinum Card members. Of those, about a quarter are fashion-focused — and that proportion is growing — reflecting the increasing importance of fashion as a cultural pillar to card members.

To better understand shifting consumer preferences and cater to new attitudes towards wealth and luxury exhibited by many of its younger card members, American Express Platinum created the Platinum Collective in 2016, recruiting a group of influencers and tastemakers which now include Emily Weiss, Carol Lim and Zanna Roberts Rassi among many others. The collective advises on potential collaborations and experiences they believe American Express cardholders would engage with, acting as an increasingly crucial curatorial lens on a world of near-endless opportunity.

BoF sits down with Janey Whiteside, executive vice president and general manager of American Express Platinum to hear how the company chooses its collaborators and why it is evolving its relationship with the fashion industry.

BoF: Why is American Express Platinum evolving its fashion strategy?

JW: To us, fashion is a key vertical which is why you see us not just nurturing a series of relationships to help new innovative designers and ways to showcase that innovation, but also giving our card members access to events within the fashion industry that they would not normally be able to experience. A lot of this is now experiential, whether that is the Harper’s Bazaar book tour or any of the special events that we have created with designers in different regions, such as Made LA, our Opening Ceremony partnership, New York Fashion Week, the list goes on.

Fashion’s growth as a cultural pillar has made it increasingly important to our membership. We know from how they spend and what they tell us that they want to have enriching experiences with fashion and tap members of the fashion industry to act as a curatorial lens on this interconnected and almost overwhelming world of opportunity that they are fortunate to live in. That is very much a powerful emerging trend among our membership. Five years ago we would not have been using emerging fashion designers as a lens on where you might want to eat or shop.

How do you choose your collaborators?

The number one criterion is that there needs to be something in it for our card members and something in it for the collaborator — it must be a partnership that benefits everybody. And then we look at how much value our card members are going to get. How relevant it is at scale? How are we going to amplify it? Some projects we enter into because they are highly scalable and we can amplify them. Some of them just have such tremendous value it's worth doing it even though it is very small.

One of the things I am most proud of is that at the beginning of the year we were the ones leaning into this. A year later, we are the ones who are now being presented with so many opportunities, so we have the luxury and also the great responsibility of choosing the right projects. Projects that are going to create the right kind of relationships that are valuable to both our card members and our collaborators — we want this is to be a really positive experience for everyone involved.

Why did you found the Platinum Collective? 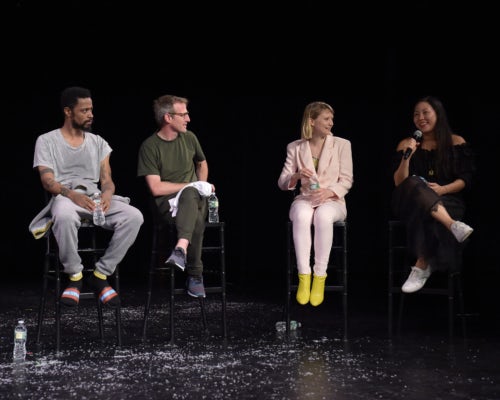 One of the things that we felt really passionate about is that we needed to get an outside perspective. Clearly at American Express, we are payments people, so we wanted to get an outside perspective from a group of insiders. We established a group of innovators and tastemakers across all of our key verticals, which we call the Platinum Collective, which meets multiple times a year. Jewellery designer Jennifer Fisher is part of the collective, Made’s Jenné Lombardo, Carol Lim from Opening Ceremony — we tap into them as individuals and as a group and they help us think about where we want to be. We also have great relationships with individuals like Off-White founder Virgil Abloh and Harper’s Bazaar’s editor-in-chief Glenda Bailey, with whom we have curated truly one-of-a-kind, exclusive experiences for our card members

Moving into next year, we are going to start to have smaller groups meet monthly, and those groups will be focused on individual streams. So if you think about the collective en masse, we have people across a range of industries: fashion, dining, design, travel — so having smaller focus groups think about how we are going to even better develop specific pillars like fashion, and amplify them digitally, is something we are really excited about.

How do you appeal to your existing consumer base and also introduce more innovative fashion experiences for younger luxury consumers?

When Glenda Bailey approached us to partner on the Harper’s 150th anniversary celebrations earlier this year, which involved multiple cities around the world, working with Victoria Beckham and Mr Armani, Christian Louboutin and 10 Corso Como, that for me was a classic expression of what American Express does for its card members. I would say that the next generation of experiences involves a different sort of highly curated event that is more provocative.

At this September’s New York Fashion Week, American Express partnered with Opening Ceremony to present “Changers, A Dance Story,” an intimate performance written and directed by Spike Jonze, choreographed by Ryan Heffington and starring Mia Wasikowska and Lakeith Stanfield. With our help Opening Ceremony was the first fashion brand to produce an original performance event to be open to the public and ticketed in New York City and on closing night — a night exclusively open to members — the designers, Spike Jonze and talent involved sat down for a Q&A.

Similarly, Made LA was not somewhere we would have historically been, but opening up a series of Platinum VIP spaces with Wiz Khalifa and being present was important to us. Really it is balancing the two: we still need to do the more traditional high-end events, but we have definitely started moving into younger designers and experiences tailored to the next generation of luxury consumers. We’re now in Miami, having opened up a Platinum House with the Edition Hotel, where we kicked events off with a party exclusively for card members where Virgil Abloh was DJ-ing and Drake performed.

How do you see the relationship with the fashion industry evolving in the near future?

The world of the traditional fashion show is going to continue to evolve, we have already seen "Shop the Runway" emerge, and we have already seen brands begin to try to provide instantaneous access to shows. We have a real opportunity to partner on both of those developments. Creating and tailoring content for our community of card members who have the financial means to meaningfully engage with brands.

We want to help emerging designers as they think about next generation commerce models and enable fashion designers to amplify their brand to our card member community, who ultimately benefit through access to products as well as amazing experiences and talent. That to me is pretty symbiotic.