LONDON, United Kingdom — As the sun rises over London’s Haymarket on Saturday morning, there are many who hope the strip just south of Piccadilly Circus, home to an unusual mix of tenants, including a Planet Hollywood and Her Majesty’s Theatre, will be recast in a different light. That’s because it is the first day of public trading for the new London location of Comme des Garçons’ Dover Street Market, the high-concept, multi-brand fashion store, which moved into the 31,000-square-foot former Burberry headquarters at 18-22 Haymarket after a 200 percent rent increase at its original Mayfair location.

Indeed, Dover Street Market is known not only for its provocative retail mix, but also for the chutzpah — and financial necessity — that has spurred the store to pioneer and transform new areas of town not previously associated with luxury retail. When the original Dover Street Market opened on Dover Street in 2004, the street was considered a sleepy stretch on the backside of Mayfair, not far and yet worlds away from the traditional luxury shopping corridor of Bond Street. Today, Dover Street is home to fashion brands Victoria Beckham, Acne, Christian Louboutin and Jimmy Choo, as well as blue-chip art dealer David Zwirner’s London outpost. And, while Dover Street Market’s off-piste home in New York — on a strip of Murray Hill better known as a pit stop for hungry taxi drivers than a retail destination — is said to be facing challenges, there is some early evidence that the “Dover Street Market effect” has already taken hold in Haymarket.

In late 2014, Dover Street Market — the brainchild of Comme des Garçons designer Rei Kawakubo and her partner and company president Adrian Joffe — signed a 20-year-lease for the new Haymarket space with Amsprop, the property company owned by Lord Alan Sugar, paying about £2.65 million ($3.8 million at current exchange rates) a year in rent, according to reports. News of the store’s move earned Haymarket a bit of buzz. No bad thing for The Crown Estate — a developer which oversees a collection of property belonging to the British monarch, but is run as an independent commercial business — which has made a £500 million ($725 million) investment in the surrounding neighbourhood in partnership with Oxford Properties. The Crown Estate’s new development, christened St. James’ Market, is just around the corner from Dover Street Market and is set to house a number of new retailers ​including British lifestyle label Jigsaw and Swedish cycling brand Assos,​ along with an evolving roster of new restaurants. (It was recently announced that New York restaurant Aquavit would open an outpost here by the end of 2016.) ​Other tenants of The Crown Estate in the area include Dunhill and Turnbull & Asser, which are located across the road from St James’ Market on Jermyn Street, a traditional hub for shirtmakers and bootmakers. “What will happen as a result is that you will get additional brands that want to sit alongside [Dover Street Market],” said James Cooksey, deputy head of urban and head of central London for The Crown Estate. “We’re going to embrace that opportunity and respond to the demand that comes as a result of that. But at the same time, we still want occupiers to be distinctive. What we’re not trying to do is replicate other streets.”

In fact, the anticipation around Dover Street Market’s opening — and its impact on the cache of the area — was so pronounced that Amsprop, which bought 18-22 Haymarket for £31 million ($45 million) from a Russian investor in 2013, promptly flipped the building, selling it for £65 million ($94 million) to a Qatari investor in July 2015, nearly a year before the store was set to actually open. "As soon he had us as a tenant, [Sugar] sold it within three months. I think it was part of his game plan. Very clever," Adrian Joffe told BoF.

Sugar’s move illustrates the significant halo effect that a fashionable entity like Dover Street Market can have on real estate. Of course, important retailers have long served as anchors for neighbourhoods and shopping malls alike, from Macy’s in New York’s Herald Square to Harrods in Knightsbridge. But in underdeveloped areas, like Haymarket, the presence of a fashionable tenant can make or break a project.

Consider the recasting of Tokyo’s Roppongi, a once-seedy neighbourhood now equally well known for Tokyo Midtown, a $3 billion, glitzy mixed-used development, as it is for its colourful nightlife. Highly regarded multi-brand retailer Restir, which originally opened in Tokyo’s upscale Ginza neighborhood in 2000, relocated to Roppongi in 2007 just as Tokyo Midtown opened its doors. Its current location is housed in the former studio of Japanese photographer Kishin Shinoyama. “When we opened, there were not so many stores here,” explained Restir creative director Maiko Shibata. “But now, it’s getting busy. Ron Herman opened some years ago. Isetan opened. There are lots of restaurants in this area, too.” Shibata said that Restir was originally drawn to Roppongi because of its reputation as a creative hub for photographers, architects and art directors, as well as its proximity to museums and galleries. But the proximity to luxury residences — the Roppongi Hills high rises in particular, which opened in 2003 and are home to many expats — was also a draw. “It’s [now] the most expensive area to live,” she noted.

It’s clear that finding undeveloped districts in major metropolitan areas is becoming increasingly difficult; a venerable diamond in the rough. In the late 1990s, Related Companies — the New York-headquartered firm that has developed over $22 billion in real estate since its founding in 1972 by Stephen M. Ross — unearthed one of those diamonds at Columbus Circle, where it won the bid to develop the Time Warner Center. The shops and restaurants in the building — including Thomas Keller’s Per Se and aspirational-luxury brands like Coach and Michael Kors — have brought new life to the area over the last decade.

However, Related’s more recent Manhattan project — Hudson Yards, for which it paid $1 billion to develop in 2008 after the original bid-winners backed out — is far more ambitious. The development, which stretches from 30th to 34th Streets and 10th to 12th Avenues on the far west side of the city, will include more than 17 million square feet of commercial and residential space. That means 100 shops, multiple restaurants, around 5,000 residences, 14 acres of public space, a 750-seat public school and a 200-room hotel. Corporate tenants include Coach — which is moving its offices to the complex — L’Oréal USA, Time Warner and The Boston Consulting Group. A space called the Culture Shed will serve as a hub for events to be held by creative industries. And the development’s nearly 12 restaurants, “co-curated” by Keller, will include concepts from celebrity chefs José Andrés and Costas Spiliadis. 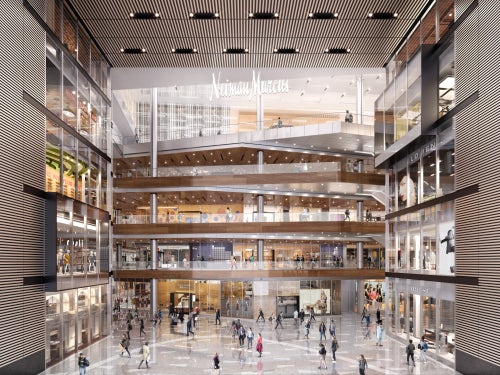 A rendering of Neiman Marcus at Hudson Yards | Source: Courtesy

But it’s luxury department store Neiman Marcus — the project’s anchor retailer with a 250,000 square-foot space, its first ever in New York City, set to open in 2018 — that is attracting the most attention. “The first order of business is to determine, is there a department store coming to your project? The one thing you can’t speculate on is the department store question,” said Kenneth Himmel, president and chief executive of Related Urban, the mixed-use development division of Related Companies.

For some time, Related was negotiating with Nordstrom to be its retail anchor, but the two parties were unable to come to an agreement. (Nordstrom is now set to open a 285,000 square-foot space at SL Green Realty Corp’s 3 Columbus Circle, just a skip away from Related’s Time Warner Center.) “It became obvious that [Nordstrom’s] requirements for space — and where they wanted to sit in the project — didn’t fit with the way we wanted to execute our scheme.” So, Related began courting Neiman Marcus, offering the Dallas-based retailer three floors and 80,000-square-foot floor plates — a unicorn of a concept in the sea of crowded Manhattan realty. “We got a few years into the project and fortunately for us, [Neiman Marcus’ executive team] Karen Katz and Jim Gold and Josh Schulman loved the concept we presented to them,” Himmel continued. “The project really kicks off at the point where you finally define the retail [anchor] in the mix of all of this.”

Hudson Yards is highly unique in that it is an untouched strip of land in an otherwise overdeveloped city. In many ways, the project is so coveted because Related (along with its partner, Oxford Properties) were able to build a neighbourhood from scratch. While tourism to the area — facilitated by the installation of a cross-town 7-Train subway station, which opened in September 2015 — will be a primary driver of retail traffic, the residential buildings and public school that are part of the plan suggest that Related is taking a holistic approach to the development. (Executives from the company have been quoted as saying that they wish Related had bought more properties around the Time Warner Center in order to better control the development of the neighbourhood.)

This start-from-scratch approach is more typical in younger cities. Consider the development of Dubai’s Design District, known as d3, over the past three years. The first phase of the project — a $1 billion investment that has brought in 2,000 people to work at the 70 or so design companies that have moved to the neighbourhood — was completed in 2015. Companies in the Design District include luxury marketing agency The Qode, product and furniture design house Aya Al Bitar and fashion designer Zayan Ghandour, who is also the co-founder and creative director of the city’s concept store Sauce.

“The design industry [in Dubai] is growing at a pace that is double its speed for the rest of the world. Our goal was to create an ecosystem for designers so that they could remain here,” said Mohammed Saeed Al Shehhi, chief operating officer of d3. “The most interesting thing we’re seeing is collaboration between designers from different mediums. It’s a very cool, creative system that we are putting together.” Along with designers working out of the region, the developers are also engaging major fashion brands like Chanel, Dior and Burberry, who have opened offices there. While the focus is on bringing companies into the neighbourhood, not necessarily retailers, d3 has made a point of adding food and shopping options to the mix. What’s more, “We have engaged the creative community in designing the district,” he added. “It gave those creative people some sort of an ownership.”

To be sure, a way to quickly give an area a high-fashion patina is to broker a favourable deal on rent. For emerging labels, in particular, an attractive lease can make entering a new development a more viable option. In areas like South Street Seaport in Manhattan, or Broadway in downtown Los Angeles, affordable rents have helped to change the dynamic of the neighbourhoods. (For instance, in South Street Seaport, upstart labels like Brother Vellies and Rialto Jean Project currently operate stores, while downtown Los Angeles managed to attract Acne Studios back in 2013.) Some developers will ask for a cut of sales in exchange for a lower rent. But as these neighbourhoods become more desirable, buoyed in no small part by the presence of fashion companies, rents also rise.

The key, of course, is carefully managing the constantly evolving dynamic between developers, fashion companies and consumers. Sometimes, that means it’s time for the cool kids to fly the coop, as was the case with Dover Street Market’s move from Dover Street to Haymarket. “What the consumer wants is constantly changing,” Cooksey said. “We’ve got to continue to evolve in order to keep things relevant.”

Editor’s Note: This article was edited on 21 March 2016. A previous version of this article misstated that Dunhill and Turnbull & Asser were among the brands slated to open in The Crown Estate’s St. James’ Market development. Both Dunhill and Turnbull & Asser are already tenants of The Crown Estate across the road from St. James’ Market on Jermyn Street.