PARIS, France — When Will Heyward bought his first pair of Tabi boots last July, he couldn’t quite believe his luck. The master’s degree student, enrolled at Central Saint Martins in London, had stumbled across an online Italian retailer called Dope Factory stocking brands like Maison Margiela, Off-White, Jil Sander and Alyx. He realised that not only did the platform offer legitimate Tabi shoes at an enticing price — 40 percent off — but also, the style was now available in sizes for men. Heyward purchased them immediately.

“I love that some people hate or are scared of them,” he chuckled. “They’re the kind of shoe that when people don’t know what they are, they’re grossed out by them, and when people do, they’re appreciative and it’s like you’re in this little ‘it’ circle.”

Since Margiela introduced an iteration of the Tabi boot for men last season, they’ve been appearing on the feet of many a male — though that never stopped some from squeezing into smaller sizes before now. American Horror Story actor Cody Fern showed up at the 2019 Golden Globes, styled by Nicola Formichetti, in a full Margiela look that included black leather Tabi boots, which shook the Internet as the image went viral in minutes. American GQ promptly claimed that the Tabi boot would be the trend of 2019. 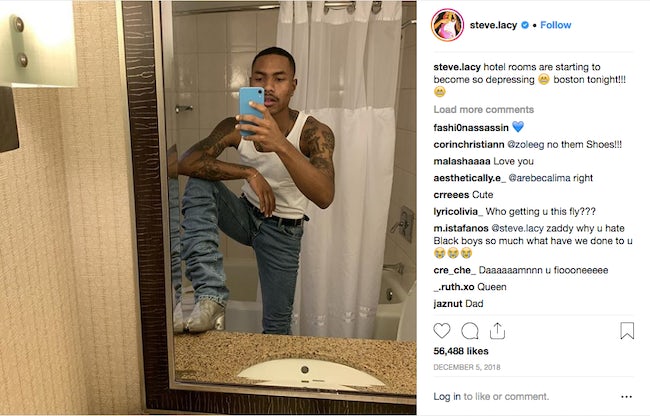 As more high-profile men adopt the cloven footwear — American musician Steve Lacy, hip-hop star A$AP Rocky, and Korean boy-band member Jin of BTS have all recently been spotted wearing the hooves — they may be onto something.

As the Birkin bag is to Hermès and the red sole is to Christian Louboutin, the split-toed boot has become synonymous with the house of Margiela. First appearing in his debut show in 1988, the Tabi boot is the Belgian designer’s interpretation of the split Japanese tabi sock, which separates the big toe from the others and is worn with traditional thong sandals.

“The split-toe design has become associated almost exclusively with traditional wafuku Japanese clothing, since tabi socks are the proper — and perhaps only — hosiery to wear with wooden sandals,” said W. David Marx, a Tokyo-based cultural historian and the author of “Ametora: How Japan Saved American Style.” 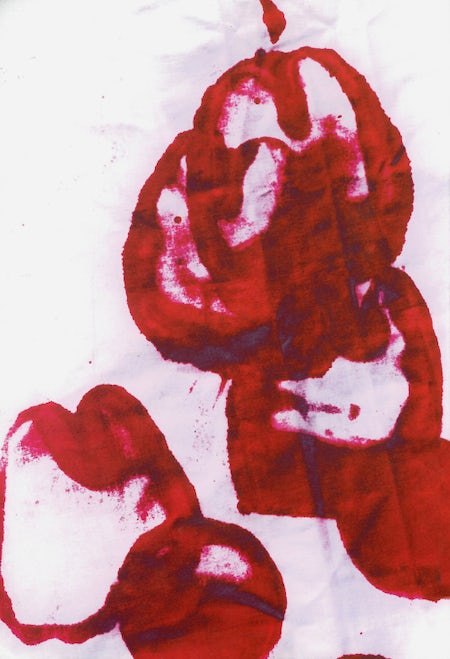 Though Margiela’s first Tabis were doused in red paint — the designer said he wanted the distinctive hoof-like footprint to remain imprinted on the white catwalk (the stains were later transformed into a look that opened his next show in 1989) — the colour of tabi socks have traditionally been a marker of their wearer’s rank. Commoners were only permitted to wear indigo blue, while samurais could wear any colour, except for purple and gold, which were worn by the upper classes. Then, at the turn of the 20th century, thanks to the mass production and development of rubber, came the rubber-soled jika-tabi, often worn by working class labourers like farmers or construction workers.

So, how did the hooven footwear become so popular worldwide and what’s driving its resurgence today?

Going back to Japan where the style originated, Ametora’s Marx pointed out that companies such as Tabio have built an entire empire on modern interpretations of the tabi sock, while local firms like Sou Sou and Tabi-ji have grown businesses selling tabi-inspired sneakers. Foreign brands like Onitsuka Tiger and Converse have dabbled in offering tabi styles, too. Demna Gvasalia, who has frequently cited Margiela as a key source of inspiration, showed Tabi-style boots for Vetements Autumn/Winter 2018. There are also reports that Nike could bring back its split-toe Air Rift silhouette after product shots recently surfaced.

“All unusual Japanese designs just become fashion innovations in the West. They’re imported with a sprinkle of exoticism and without any of the social baggage of their origin culture,” quipped Marx. “Few [people] will look at a Margiela Tabi shoe and think, ‘ah, the shoe of construction workers.’”

A release provided to BoF by the house, owned today by Only The Brave (OTB) and led by creative director John Galliano, acknowledged the shoe's origins as footwear for the working class, but said that its key appeal — both historically and today — was comfort, allowing for greater agility for the feet and toes.

But it begs the question whether Margiela would be met with accusations of cultural appropriation had he launched his Tabi shoe today. "After nearly 200 years of Western artists and designers borrowing from the great tradition of Japanese aesthetics, I don't know how 'political' the idea of a tabi shoe would be considered in the West, but certainly in Japan, there appears to be no controversy," said Marx. 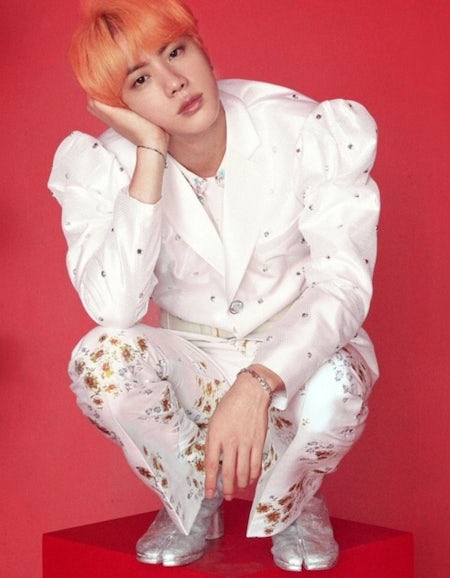 Tokyo-based fashion designer Kota Gushiken is among those who aren't bothered by it. “When I saw it for the first time in a photo, I was around 17-years-old and thought it was amazing,” he told BoF. “Because I’m Japanese, I had known of the tabi shape for a long time, but Margiela’s Tabi boot was something different. It’s [taken] from something traditional, but he took the inspiration and twisted it in his own way.”

“I’m pretty amazed that you asked me this question because I’m wearing them today!” laughed Maya Nago, a Tokyo-based journalist who formerly worked in the Japanese outposts of Wired and Farfetch. “I have two pairs, in black patent leather and in nude, and I don’t think it’s cultural appropriation at all. Rather, it’s a great opportunity for Japanese people to realise that [our] culture and design can inspire others, [especially] as the shoes are designed in a sophisticated, bold and high-fashioned manner.”

“How to explain his popularity? He’s got the magic touch!” said Kristina de Coninck, a longtime muse and model for Margiela, who first appeared in his show in 1989 and continued to walk for the designer until 2005. “When I saw the Tabi boots for the first time, I was immediately seduced by their originality. It was like a poetic fantasy from elsewhere, and wow, every season, Martin introduced a new way of wearing them,” she told BoF. "I think there is a total respect for the Japanese culture."

But not everyone is as captivated by the designer, said Alexandre Samson, who worked closely with Martin Margiela to curate a retrospective show at the Palais Galliera in 2016. “You have to [realise] that his popularity is a posteriori. During his career, he was relatively unknown for a massive audience,” he explained. “The Tabi boots…were worn by very few daring people during the 1990s. In 2019, I’m not sure their aspects are yet accepted in the streets. Their provocative potential must not be underestimated.”

For some wearers, it’s exactly this that makes the footwear so appealing. “[The Tabi] still looks as provocative today as it did when it first appeared,” said Christa Kaufmann, catwalk editor for trend forecasting agency WGSN. “The cycle of the fashion system has been defined by an endless trickle-down of ideas and trends, which has led fashion-forward consumers to look for novelty, originality and individuality more than ever before.”

Social media has played a part in propelling its popularity. “Even though the Tabi boot made its debut pre-Internet, the recognisable clef-toe silhouette is predestined to be a success in the Instagram era,” said Kaufmann.

“Because of social media, the ability to source images and the actual product itself has become so much easier,” added Ariana Waiata Sheehan of Aro, a London-based store and appointment-only archive, specialising in Japanese and Belgian designer pieces. Indeed, there is no end to the cult fan accounts celebrating Tabis that have popped up on Instagram, Tumblr and elsewhere.

For those like Heyward, it’s an opportunity to connect with like-minded individuals. “I feel like I have a small bond with every person that I see wearing Tabis,” he said, noting that not many men would give the split-toe shoe a chance — and with all things Margiela, that’s the point. “It’s not for everyone,” agreed Bryant Lee, senior buyer at the influential London-based boutique Machine-A, which has nine Tabi styles for Spring/Summer 2019. The buyer also wears Tabi boots himself.

Their provocative potential must not be underestimated.

As the shape becomes revitalised for modern culture, with new iterations and additional sizing for men, it's also driving business for retailers worldwide. “We’ve seen a 112 percent increase on Tabi boot styles arriving in US and UK online retailers over the past three months, compared to three months prior, revealing that demand is alive and well,” said Kayla Marci, market analyst at Edited, a data analytics company specialising in fashion.

“Our first delivery of the Tabi boot in black leather [for men] sold out within days,” said Federico Barassi, senior director of menswear buying at Ssense, which began offering the Tabi sneaker and heeled boot for men in Autumn/Winter 2018. 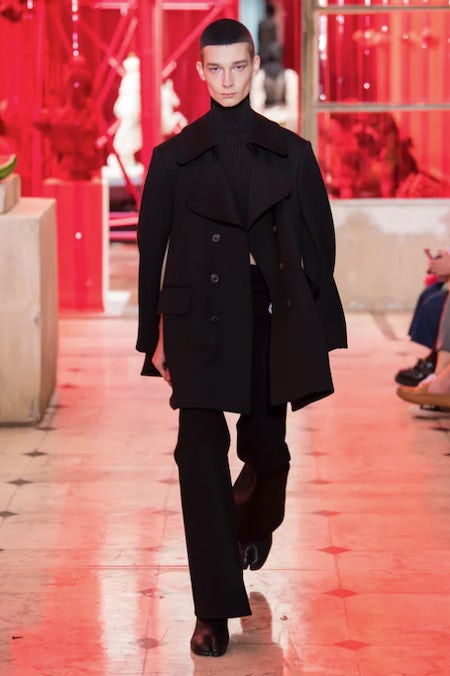 “Season to season, we sell hundreds of Tabis and have increased by over 233 percent in 2018 compared to the previous year,” added Brigitte Chartrand, senior director of womenswear buying at Ssense, noting that as a result, the Montreal-based fashion retailer would be collaborating with Margiela on a capsule collection celebrating the Tabi for Spring/Summer 2019. The online platform currently carries 49 Tabi options, including 11 styles in varied materials and colours.

Both MatchesFashion.com and Machine-A, which have stocked the Tabi since Spring/Summer 2017, have seen similar success. “The Tabi boot may have launched in the late 80s, but it is still a very pioneering style that hasn’t dated,” said Cassie Smart, head of womenswear buying at MatchesFashion.com, noting that customers are attracted to the shoe as “an investment piece” and “a collectible.”

“A lot of customers come back each season to discover the new variation that the Tabis have to offer. The signature styles are always the first to go, as they are such classics, while the new designs [tend to] attract collectors,” added Machine-A’s Lee.

The craze for Tabi has also extended into the resale market. “As a store of pre-owned pieces, shoes are a difficult product to buy and sell generally, except for coveted shoes like the Tabi, which there’s almost a waiting list for — it’s one of the most asked-for items,” said Aro’s Waiata Sheehan.

At online resale platform Depop, there was a 170 percent increase in the search for Tabi boots in 2018 compared to the previous year. The number of Depop users searching for Tabi boots, meanwhile, increased 134 percent. Prices tend to begin around £300 (almost $400), although the most expensive active listing currently sits at £5,555 ($7,396). “Since the start of 2018, gross merchandise volume driven by Tabi boot sales has increased 85 percent,” said a spokesperson for the company.

Much of the Tabi boot’s unexpected success rests on being deliberately bizarre and heinous, so does it make sense that the house of Margiela is now churning out the style in so many different variations?

Samson said it’s inevitable: “Tabis for Margiela are like tweed for Chanel. It’s become an emblem that is reinterpreted each collection.”