NEW YORK, United States — After multiple magazine covers and overseas visits, countless state dinners and late-night talk show appearances, there is no question that Michelle Obama has had an unusually fruitful relationship with fashion during her time as First Lady of the United States.

But in the wake of Donald Trump's victory in a highly divisive presidential election, during which most of the fashion community was vocal in its support for Hillary Clinton, Melania Trump’s future relationship with fashion — and fashion magazines — remains uncertain.

Vogue editor-in-chief Anna Wintour was a dedicated fundraiser for Clinton, as she had been for President Obama, and Vogue backed the Democratic candidate in the magazine’s first-ever political endorsement. Glamour editor-in-chief Cindi Leive, Elle editor-in-chief Robbie Myers, CFDA chairperson Diane von Furstenberg and Hearst’s Joanna Coles are just a few of the industry leaders who also supported Clinton.

So how will this anti-Trump community interact with America's new First Lady? Will her style be dissected and copied and lauded with the same fervour as Mrs. Obama’s? As with anything Trump-related, prognostication is a challenge. Never before has a president so openly disregarded democratic norms and aligned himself with a racist, xenophobic, misogynist, anti-Semitic and nationalist creed, which fundamentally changes the significance of covering Mrs. Trump’s style.

“While we never comment on future editorial, Vogue has a long, rich history, dating back to Mrs. Helen Taft, of covering America’s First Ladies, regardless of party affiliation,” said a representative for the title. In addition to Mrs. Taft, Vogue has photographed every First Lady since Lou Hoover, with the exception of Bess Truman. Hillary Clinton made history when she became the first First Lady to appear on the cover of the magazine in December 1998. Michelle Obama has since appeared on the cover three times since 2009, most recently on the December 2016 cover.

And, as Vogue wrote in its endorsement, it has “also featured Donald Trump [and] his family members Ivana, Marla, Melania and Ivanka — multiple times in our pages.” The magazine featured Mrs. Trump on its cover in February 2005, for which editors André Leon Talley and Sally Singer travelled to the Paris Couture shows with her to shop for her wedding dress.

“[Fashion magazines] have a wide variety of readers, so it wouldn't necessarily make sense for them to pick and choose what First Lady they were going to photograph based solely on politics, necessarily,” says Robin Givhan, The Washington Post’s fashion critic and author of “Michelle: Her First Year As First Lady.”

It wouldn't necessarily make sense for fashion magazines to pick and choose what First Lady they were going to photograph based solely on politics.

In Vogue’s case, Givhan sees the magazine’s approach as one of chronicling the new and varied occupants of the West Wing. “Is it a question of: are magazines going to photograph her for stories? I would think probably yes, because that’s part of the tradition. But what they might do above and beyond that, I just don’t think that we know.” 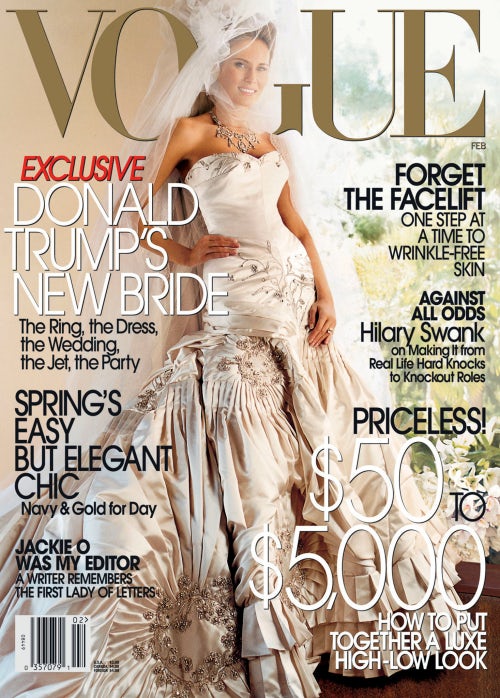 Indeed, it seems there is a limit. “We currently have no plans to cover Melania Trump in InStyle,” said Laura Brown, editor-in-chief of InStyle. Mrs. Obama appeared on the cover of its October 2016 issue. Glamour’s Leive, who has also featured Mrs. Obama on the magazine's cover twice, declined to comment, as did Elle’s Robbie Myers.

StyleWatch, InStyle’s sister publication, will cover Mrs. Trump from a style point of view. “If her fashion choices are inspirational, interesting, well-priced, introduce new designers or are in any way newsy, we will share with our audience,” said editor-in-chief Lisa Arbetter.

Glenda Bailey, editor-in-chief of Harper’s Bazaar, also declined to comment but the magazine did publish an interview and photo shoot featuring Mrs. Trump in its February 2016 issue. "Fashion is a tough business," the former model, 46, says of pausing her skincare line and QVC jewellery collections when the campaign began. (In the same interview, designer Rachel Roy is quoted as a friend.) The magazine likened her to Nancy Reagan and Carla Bruni-Sarkozy, though Mrs. Trump declined to name any First Lady she herself admired.

The insatiable online content churn that has emerged in the last eight years has contributed to the above-and-beyond coverage of Mrs. Obama’s style, so it would seem a certain level of attention dedicated to Mrs. Trump from a fashion perspective is inevitable. Pret-a-Reporter posted a Mrs. Trump style gallery the day after the election, and E!, Hollywood Life and other celebrity-focused sites are already starting to cover her style, outfit-by-outfit.

“I don’t recall that kind of blow-by-blow fashion coverage being attached to Laura Bush, and in part that was because she was a much more traditional template of a First Lady when it came to fashion,” says Givhan. “She always looked appropriate and she always looked lovely, but that’s not really fodder for a fashion gallery.”

Sartorially, what little we’ve seen of Mrs. Trump throughout the campaign has been sleek, minimal and clearly the wardrobe of a wealthy woman: jewel-toned blouses, dresses and jumpsuits from mostly European designers such as Gucci and Roland Mouret. Her pre-campaign Twitter postings reveal a well-documented love of Chanel, Louis Vuitton, Manolo Blahnik and Christian Louboutin, as well as bandage dresses and giant diamonds.

By all accounts, Mrs. Trump shops for herself rather than requesting items directly from designers. Whether fashion labels will be eager to dress her remains to be seen. To date, no brands have issued press releases in a bid to promote her endorsement of their wares, as is typically the case with public figures and celebrities.

Part of that has to do with lack of opportunity. Mrs. Trump chose not to be an active part of her husband's presidential bid. Besides a speech at the Republican National Convention (when she was accused of plagiarising Michelle Obama), another in Philadelphia and a few television interviews, Mrs. Trump has remained out of the public eye.

Another factor beyond the political that could limit the fashion media's coverage of Mrs. Trump is whether or not she uses her wardrobe to promote American labels, as Mrs. Obama has so successfully done, or connect to a broader signficance of a particular occasion.

“There hasn’t necessarily been this indication that she intends to use fashion in that kind of thoughtful way,” says Givhan. For example, outlets from Jezebel to the New York Post were quick to analyse Mrs. Trump’s decision to wear a pussy-bow blouse days after her husband’s lewd “Access Hollywood” comments leaked, but she later said the reference was coincidental.

If Mrs. Trump continues to avoid making statements with her clothes as First Lady, is that a statement in itself? “It’s a choice, but it’s not an unusual choice,” says Givhan. Throughout most of the 20th century, First Lady fashion celebrated American manufacturing more than American design aesthetics. “American fashion had some designers. But it was predominately a manufacturing industry and the essence of design was rooted overseas,” she adds.

That began to change with Jacqueline Kennedy, whose love of French designers caused problems for President Kennedy with the influential garment industry unions. But she set a tone for American women with her youthful, modern style and Bill Blass described her as “the greatest pacesetter of our time — without doing anything highly original.”

Both Kennedy and Nancy Reagan came into the White House with a distinctive sense of style, says historian Joan DeJean, author of “The Age of Comfort.” “They were just glamorous women. We’re not in an age of real glamour and that’s not a criticism.” Mrs. Obama arrived as the mother of young girls and it resonated because it reflected the way women want to dress today. “There are ages in fashion when fashion opens more to becoming accessible to the stages of women’s lives, rather than just making them beautiful and glamorous,” says DeJean. “[Michelle] went along with it and she used that pulpit excellently.”

Givhan says the nation has also been captivated by Mrs. Obama’s fashion because her choices have been dynamic, surprising and intelligent. “The clothes are interesting because of the context.”

In two or three months [designers will] reach out ... You'll see everyone dressing Melania. She's representing the United States.

The clothes are also interesting because they are often accessible. A 2010 study that looked at 200 outfits worn by Mrs. Obama the first year after the 2008 election found that the First Lady generated $2.7 billion in value for the brands she wore, from Jason Wu to J. Crew. The Duchess of Cambridge — who, like Mrs. Obama has a knack for mixing high and low fashion — has a similar commercial impact, and Newsweek estimated the “Kate Effect” may be worth £1 billion to the UK fashion industry.

By comparison, Mrs. Trump has embraced a role as a co-pilot in Mr Trump’s ostentatious and excess-filled lifestyle. In 2000 she posed nearly naked in a shoot for British GQ, photographed wearing handcuffs and wielding a chrome pistol aboard her husband's Boeing 727. The custom Christian Dior Couture wedding gown she wore in Vogue is estimated to have cost around $100,000.

But while it would be a challenge for any First Lady to fill Mrs. Obama's void when she leaves, the fashion industry may be forced to accept that Mrs. Trump's style choices now boast a global platform.

“I think that in two or three months [designers will] reach out, because it's fashion,” designer Carolina Herrera told BoF in a recent interview. “You'll see everyone dressing Melania. She's representing the United States.”

Whether Mrs. Trump embraces fashion, and whether the fashion industry embraces her, she will influence the over-60 million people who voted for Mr Trump. As she said to “60 Minutes” on Sunday, “There [are] a lot of responsibilities... I am very strong and tough and confident, and I will listen to myself."