Why H&M Is at the Met Gala

While other fast-fashion brands opt out of the industry's biggest night, H&M joins couture houses and emerging designers at the Met Gala and is launching a retail collection inspired by its custom celebrity looks. Is it worth the investment?

Why H&M Is at the Met Gala

While other fast-fashion brands opt out of the industry's biggest night, H&M joins couture houses and emerging designers at the Met Gala and is launching a retail collection inspired by its custom celebrity looks. Is it worth the investment?

NEW YORK, United States —As "Riverdale" actress Lili Reinhart ascended the stairs at the Metropolitan Museum of Art on Monday night at the Costume Institute Benefit — fashion’s celebrity extravaganza better known as the Met Gala — with her onscreen and rumoured offscreen boyfriend Cole Sprouse, fans of the hit teen show went wild online, reposting image after image of the couple. They dissected every glance between them, every element of her fitted bodice and long silver train.

The Met Gala is a night where luxury’s fashion heavy hitters like Chanel and designer darlings like Monse deliver their most show-stopping couture creations. But Reinhart’s gown was the work of a very different type of brand — Swedish fast-fashion giant H&M.

Monday night marked the fourth year H&M has sponsored a table at the benefit and custom-designed dresses for their guests, who have included Nicki Minaj, Ashley Graham, Jourdan Dunn, Odell Beckham Jr. and Janelle Monáe. Reinhart was one of six guests who got the H&M treatment on Monday night, including Jasmine Sanders (the influencer known as Golden Barbie) in a shiny gold ball gown, and actress Olivia Munn in a slinky chainmail creation.

H&M is better known for its low-priced daywear and accessible designer collaborations than glamorous evening-wear. But a quick look at Instagram helps explain why the company is venturing outside its comfort zone: as of 9:00 pm Monday night, the Met Gala had been mentioned more than 1.5 million times on public Facebook, Twitter, Instagram and Reddit pages, according to social-media monitoring and analytics firm Brandwatch. While sponsor Versace was the most mentioned brand during this period, representing 15 percent of mentions, H&M had a strong showing and tied with Gucci to represent 9 percent of all mentions.

“Our customers really get inspired to see that we are part of the fashion world,” said H&M creative advisor Ann-Sofie Johansson. 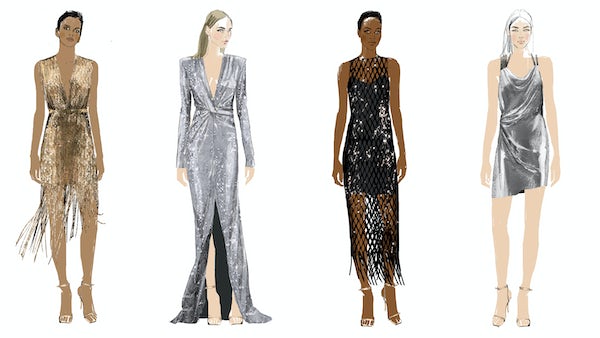 H&M isn’t the only fast-fashion brands to invade the Met Gala in recent years — Topshop does it too. (Zara, H&M's biggest competitor, has never participated; it notoriously eschews traditional marketing strategies such as celebrity dressing.)

But this year, Topshop is sitting the Met Gala out, and H&M is doubling down. In addition to buying a table - which typically costs about $275,000 - the retailer is launching an H&M Gala collection for the first time, priced between $100 and $500, and inspired by the custom looks worn by Reinhart, Munn and the other guests. The pieces will arrive online and at its 5th Avenue flagship store on Wednesday, where H&M has set up a dedicated red carpet installation.

Topshop has also offered accessible versions of its Met Gala gowns for purchase after the high-profile evening in years past. The British brand is in the middle of a turnaround to revive reportedly flagging sales and its parent company, Arcadia, is cutting jobs, according to Bloomberg. A Topshop representative declined to comment.

H&M’s Met Gala-inspired collection also comes at a challenging time for the company, which hasn’t adapted fast enough to the growth of online shopping and is reducing its store network while investing in its website. H&M has stumbled into PR crises this year, including the “racist hoodie” incident and a lawsuit against a graffiti artist that inspired calls for boycotts.

In the fiscal quarter ending in February, H&M Group's profit decreased by 61 percent year-over-year to 1.3 billion krona ($144 million), due in part to high inventory levels that caused H&M to offer more promotions than usual. In March, its stock fell to the lowest point since 2005.

H&M is also facing competition from newer e-commerce-focused brands such as Fashionova and Boohoo, which owns NastyGal and PrettyLittleThing. These companies focus their marketing efforts on social media influencers who drive direct sales, while eschewing mainstream celebrity red carpet events.

But H&M sees the caliber of celebrity that is able to score an invite to the Met Gala is still influential to its customers, Johansson said.

She said the retailer started working on this year’s Met Gala designs even before the exhibition was announced as “Heavenly Bodies: Fashion and the Catholic Imagination,” which H&M interpreted as “celestial glamour” on the red carpet. The designers who work on the Met Gala also create pieces for H&M’s designer collaborations (this year with Moschino) and the Conscious Exclusive collection, which is made with more environmentally sustainable fabrics.

Evening-wear is a tricky category for H&M. The market for gowns in the $100 to $500 price range as a whole is growing, representing 43 percent of the market now, up 31 percent from the same period a year ago, according to retail analytics firm Edited.

But even that price range is above the typical fare at H&M, where 97 percent of women's evening dresses cost less than $100, also according to Edited. H&M sells only 150 floor-length gowns right now, compared with over 600 options at UK-based ASOS, according to Edited. Last year, it took an average of 109 days to for one of H&M’s evening dresses to sell through, versus an overall average of 95 days.

“[The H&M Gala collection pieces] are not that easy to make, to be honest,” Johansson said. “We can’t make them in [large] volumes really.” She says the collection is worth the effort because “we want to show that we can pull of different things; we are not just one dimensional.”

H&M has long sought to be a part of the fashion conversation. In addition to their annual collaborations, it stages a runway show each season in Paris. Being in the room at the Met Gala puts H&M in contact with celebrities it might want to hire to star in a campaign or with designers that it might want to partner with on a collaboration collection.

And the Met Gala, fashion’s Oscars equivalent, is a coveted and exclusive night with the who’s who of the industry. When Amazon sponsored the event in 2012, it was part of its strategy to raise its fashion ambitions. “It was really fast-tracking access into the fashion community and integrating into the whole ecosystem…. the celebrities, musicians, models,” says Cary Leitzes, founder of creative agency Leitzes & Co, about Amazon's role at last year's event.

But that proximity to fashion is an even more important differentiator for brands in today’s competitive market.

“A fashion brand is defined by the company it keeps,” says Allen Adamson, co-founder of brand consulting firm Metaforce, adding that the Met Gala is a relatively inexpensive way to earn high-end fashion credentials.

“Once they give up any connection to the high-end world of fashion, they can’t differentiate on price,” he continued, explaining that the Met Gala presence — and the social media content that comes with it — is part of what separates H&M from its competitors beyond price and product. With the rise of Amazon’s fashion business and other new digital competitors, “it’s a race to the bottom” in terms of pricing, says Adamson.

Whether that differentiation is compelling enough to keep consumers shopping and not just tuning in to the Met Gala red carpet, however, is less of a given — no matter how glitzy the gowns on fashion’s biggest night.