NEW YORK, United States — The ‘It’ bag is attempting a comeback.

In the 1990s and early 2000s, handbags like Gucci’s Flora Jackie, Saint Laurent’s Mombasa and Balenciaga’s Lariat became coveted status symbols for consumers and major boosts to the bottom lines of European luxury houses. Fendi was one of the hottest labels of the era, selling 600,000 of its oblong, short-handle Baguettes in over 700 iterations in the decade after its 1997 debut, with an average price of $1,500 each.

“Everybody — everybody — is talking about handbags with the intensity of cardinals appointing a new Pope,” an unnamed fashion journalist told the New Yorker in 2006.

A few designer styles — the Hermès Birkin and Chanel 2.55 in particular — can still excite that sort of frenzy. But most icons of the peak handbag years were left behind by the fashion cycle, along with the logo-heavy design and conspicuous consumption they stood for. Today’s must-have accessory is indisputably the sneaker, not the bag.

But logos are back, and luxury sales are once again booming. And the makers of some of aughts’ hottest handbags are turning to their archives. Fendi, Dior and other brands are resurrecting styles with modern updates (such as cross-body straps) and a fresh marketing approach (read: lots and lots influencers). It appears to be working, at least for Dior: the Saddle hit the market last summer with much fanfare and market sources say it's selling well.

A 2018 NPD report showed that while the $19 billion fashion handbags market is decreasing, designer handbag sales are increasing because many consumers see those products as a worthy investment. Dior parent LVMH reported leather goods sales across its brands rose 15 percent in 2018 to €18.5 billion (about $21 billion).

Now fellow LVMH brand Fendi is trying for the same magic with a marketing push around the new Baguette, with a celebrity-heavy party during New York Fashion Week at its uptown flagship and an influencer campaign that reminded shoppers of the Baguette’s connection to Carrie Bradshaw on “Sex and the City.”

It’s too soon to say whether the campaign has been a success. Much has changed about consumer behaviour over the last decade. Where women once wanted to be seen carrying the same must-have bag, many now prefer limited edition accessories to signal they are “in the know."

So while brands are smart to capitalise on the nostalgia trend and reissue their famous styles for a new generation, these bags don’t signify status the same way they did before, especially for consumers who remember well the first it bag craze.

New York-based personal shopper and stylist Silvia Gaitan, whose clients mostly range in age from their 30s to 60s, sees the it bag relaunches as geared for influencers rather than ordinary women. She prefer luxury handbags that feel more individualised.

“None of my clients responded to them,” she said of the Dior Saddle. “They try to stay away from what’s trendy.”

Still, the purveyors of yesterday’s most popular accessories are gaining some traction, deep into the era of the sneaker. Ad blitzes tied to former “it” bags have attracted attention on social media, and their value in the resale market has crept up.

The vintage revival trend is certainly part of the answer. Millennials are discovering the signature styles of the 1980s and 1990s with fresh eyes, eager for products with heritage and history, and brands across the market like Versace and Marc Jacobs are eager to serve up versions of what made them famous decades ago.

Luxury consultant Robert Burke, chief executive of retail consultancy firm Robert Burke Associates, says many consumers who decide to spend $2,000 to $4,000 on a bag seek “longevity and recognition.” For trend-driven, Instagram-friendly styles, they have more options in the $400 to $600 range now than ever before.

For a millennial consumer, looking to make an investment, the Baguette and the Saddle “have a great deal of allure,” Burke said.

Fendi, in particular, has pushed the Baguette’s history hard. The brand’s advertising campaign stars influencers such as Caroline Daur paying homage to “Sex and the City,” where Sarah Jessica Parker’s character famously proclaimed her love for the Baguette back in 2000. The ad even featured a cameo from Parker repeating her line from the show: “This isn’t a bag, it’s a Baguette.”

“These icons must be updated in order to stay relevant for new consumer generations,” said Luca Solca, adding that it is important for luxury brands to have recognisable products in a competitive and crowded market, and releasing an old “icon” is an easy way to achieve that.

The booming resale market is also opening up old bags to new customers. A young woman who might have seen a $2,000 bag as well out of her price range might now by it with a goal of recouping some of the price down the road via secondhand luxury sites like Rebag, The RealReal and Vestiaire Collective.

Last week, Andrea Loredo, 28, who blogs about fashion online, bought a vintage Baguette on TheRealReal after seeing others wearing it during New York Fashion Week. It marked her first luxury handbag purchase. She considered buying the bag directly from Fendi, but thought the new versions looked too different from the original. Plus, she anticipates the bag will gain value on the secondary market over the course of the year, so she can resell it later.

“That’s how I rationalized it,” she said.

Luxury houses keep resale sites at arm’s length, but they are indicators of growing demand for vintage silhouettes.

Charles Gorra, the founder and chief executive of Rebag, said the price of the Dior Saddle increased 300 percent in the 12 months before the brand revealed its relaunch campaign in July 2018. (The bag first popped up on Maria Grazia Chiuri’s Dior runway in February 2018, and went on sale the following autumn). 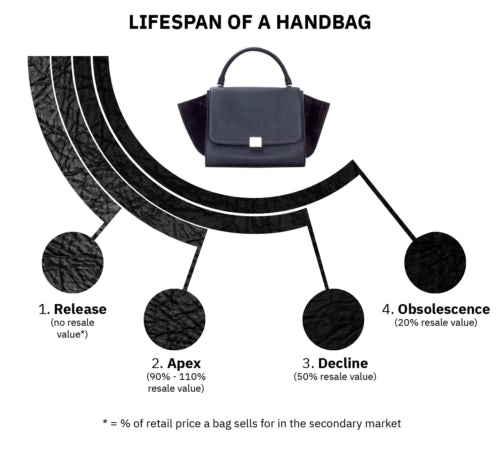 Dior deployed an aggressive marketing strategy to revive the Saddle, enlisting about 100 influencers, including Chiara Ferragni and Eva Chen, to wear and post about it. The bag generated almost $3.5 million in earned media value in the third quarter of 2018, according to Tribe Dynamics. But the momentum didn’t sustain, with that figure dropping to just $193,300 in the final three months of the year.

But the prices are still seeing a lift on the secondary market. Data from TheRealReal showed that the Saddle’s price doubled from 2017 to 2018 to 42 percent of the original retail price. On Rebag, the Saddle is now on sale for close to 75 percent of the current retail price, with vintage versions selling for about 30 percent of their market value. This is better than average: most bags lose 40 to 60 percent of their value in the six months to a year after launch and decline swiftly after that.

Fendi may have a bigger job ahead of it to resurrect the Baguette. The bag hasn’t seen an increase in resale value like the Saddle. In fact, Gorra said that he had stopped buying Baguettes from sellers more than a year ago because the prices were too low — just over $200. Prices hover between $400 and $500 today, as the effect of Fendi’s campaign takes hold, though that’s still about 80 percent below current retail.

Luxury brands will likely try to extend the current cycle of bag relaunches for three to five years by controlling distribution and offering a steady dose of new takes on famous silhouettes. But it’s also not clear whether high-profile relaunches can approach the staying power of the original.

“Things never moved as fast when the Fendi and Dior bag originally came out,” said Burke.

Dior Brought Back the Saddle Bag With a Global Instagram Blitz