While the explosive popularity of puffer jackets is a boon for outerwear brands like The North Face and Moncler, the trend highlights some uncomfortable truths about South Korean society.

While the explosive popularity of puffer jackets is a boon for outerwear brands like The North Face and Moncler, the trend highlights some uncomfortable truths about South Korean society.

SEOUL, South Korea — With temperatures now hovering at single digits, followed by reports of first snowfalls, a curious trend is taking off in South Korea: the puffer jacket. Its presence is ubiquitous and is worn by everyone across the country, from elementary school children in Busan to K-pop celebrities like Suzy Bae and BTS in Seoul. But the jacket is more than just a piece of practical cold-weather wear; it’s a vital fashion statement that has become a marker of class divide.

A few years ago, the craze was specifically for North Face jackets. They’re often referred to as “spine breakers,” because “parents’ [financial] backbones are ‘broken’ by having to buy these ridiculously high-priced jackets for their children,” explains Celine Hong, a Korean photographer and videographer whose clients include Vogue Korea, Dazed, Hypebeast and MM6 Maison Margiela.

While the Pyeongchang Winter Olympics this Feburary helped boost the recent trend for puffers, it is also a cultural issue with meaning that goes far deeper. “It’s a syndrome phenomenon beyond fashion. [It] starts with the middle school and high school uniform culture of Korea; students who wear the same clothing all the time began to wear padded jackets,” says Mo Kim, general director of the multi-brand concept store Rare Market. 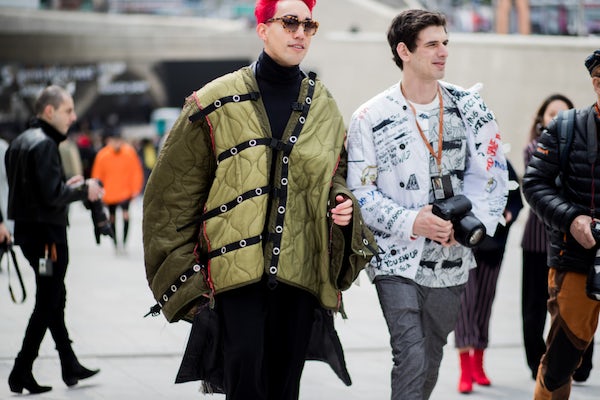 The type of puffer jacket someone chooses to wear is important. “Each brand, style and colourway signifies a certain social subgroup,” he continues, explaining that playground hierarchies are determined by the choice of puffer jacket worn. It’s similar to how consumers in need of status use loud luxury goods to signal to the less affluent that they are not one of them.

In recent decades, Asia has become a region of extremes: as of 2018, four of the world’s five most expensive cities are in Asia, with Seoul coming in fifth place. Yet, a wealth gap, driven largely by wage disparity and differing levels of access to education, has opened up. It has in turn led to a hugely popular phrase among young people in South Korea, which is "hell joseon (헬조선)," roughly translating as “Korea is close to hell and a hopeless society.”

While the country has often been championed as an economic success story, thanks to the global popularity of South Korean culture known as hallyu, income equality in Korea is the worst in the Asia-Pacific region, according to a 2016 report by the International Monetary Fund, dispelling the myth that everyone here is affluent, when in fact, there is a system of hidden social strata and wider income disparity issues that are not noticed from a cursory trip to the capital city.

Similar to Japan, there are ancient codes of social hierarchies that determine a lot in Korean life. Therefore, anything that highlights this — like the status symbol of a coat — can be powerful, because it shines a light on a topic and emotions that are rarely discussed openly but that people feel. According to local media, the puffer jacket fad has caused problems in schools like theft, aggressive bullying, counterfeiting and money extortion. Some parents are even said to have bought their children expensive puffer coats to boost their self-esteem, but merely end up competing with other parents.

While change is afoot — President Moon Jae-in was elected on a wave of outrage over this growing inequality and has begun work to reverse the trend — the fact of the matter is, “every teenager I know has at least one puffer jacket,” says Hong. “It’s the most popular item in the winter season.”

Parents teach their children that by not standing out too much, they’ll be safe. It’s why Koreans tend to look alike.

But what’s really driving this trend?

It’s no secret that K-pop, K-dramas and K-beauty have become wildly popular over the past decade in Seoul and overseas. Many individuals look to their favourite Korean stars for inspiration, so when the boy-band members of BTS step out in Puma’s down padded coats, it’s likely that a legion of fans will follow. “You see celebrities on TV shows; when they’re shooting outside it’s very cold and they have to stay outside for a long time, so they wear these puffers and it becomes a big trend,” says Jung Kuho, executive director of Seoul Fashion Week, held at the Zaha Hadid–designed Dongdaemun Design Plaza. “My nephew is 13 and he really wants a long puffer jacket this winter. It’s become like a uniform for that generation.”

However, for the older generation, the puffer’s appeal has less to do with following K-pop trends and more to do with finding comfort in conformity rather than individuality in South Korea’s culturally homogeneous society. “Many parents here teach their children ... that by not standing out too much in a group, they’ll be safe,” says Jung. “It’s why Koreans tend to look alike. People here love to follow trends, whichever way it goes, and a majority of people go after the same thing: they go to the same restaurants, listen to the same music.” 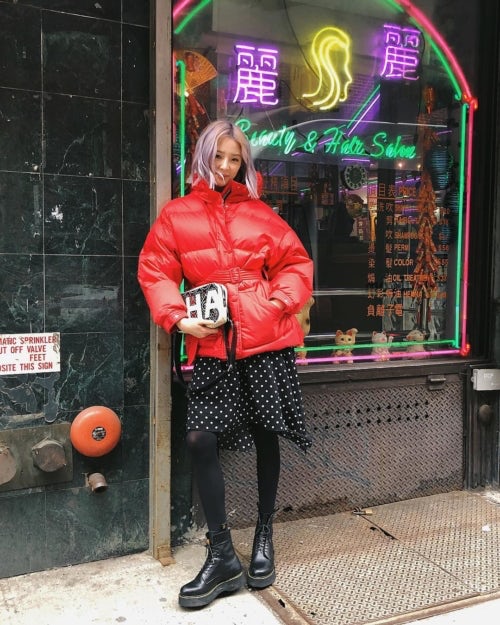 “There is a tendency for people here to follow key trends en masse,” agrees Caroline Kim, chief operating officer of Solid Corporation, an export-trading company in Seoul, but also added that “apart from the obvious reason of freezing temperatures during the winter, Koreans are generally very influenced by global trends. The popularity of streetwear and street brands has led to increased customer demand for [puffers] in Korea.”

Hip-hop and associated visual representations have recently exploded into Asia’s mainstream, prompting a hip-hop-influenced, high-end streetwear obsession. But it's a phenomenon that isn’t restricted to the continent. (Earlier this year, rap overtook rock as the biggest music genre in the US for the first time.) Now, it’s starting to take over airwaves in South Korea, even though the country is better known for its monumental K-pop scene.

The first widely recognised Korean song containing rapping appeared in 1989, courtesy of Hong Seo-beom, a moderately popular rock musician. Then emerged Jinusean, a pioneering Korean hip-hop duo backed by YG Entertainment — the talent agency of Big Bang, G-Dragon and 2NE1 — and rappers Tiger JK and DJ Shine of Drunken Tiger, who emulated prevailing black music trends in America. However, Korean hip-hop — abbreviated as K-hop — caught global attention in 2016 when Coachella announced it would host a Korean group for the first time in its 17-year history. To the surprise of many, the invitation was not extended to leading pop idol groups like EXO or Girls' Generation, but to alternative hip-hop group Epik High.

“When you watch Korean TV, it’s all about R&B and hip-hop. Rap is super popular right now,” says Jung, citing popular South Korean TV show "Show Me The Money," a competition show where everyone from underground rappers to mainstream artists battle it out to bring home a cash prize. (The programme’s popularity has extended to neighbouring countries like China, leading to successful spinoffs like “The Rap of China.”) “When you look at rappers, their style and how they dress, they love big puffer jackets,” Jung continues.

The South Korean market presents a major opportunity for fashion brands, with designer apparel and accessories approximately worth $5 billion and growing 7.2 percent on average each year. And the puffer jacket phenomenon has been a boon to outerwear brands in the country. 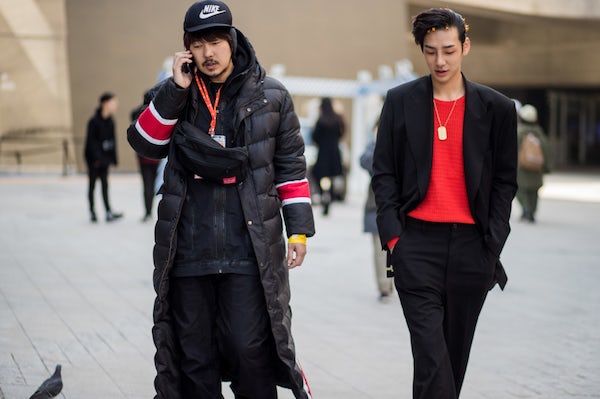 In the first nine months of 2018, Moncler’s sales in Asia grew 39 percent, a spokesperson at the company told BoF, noting that China and Korea were the strongest performers. “Moncler’s down jackets are a luxury must-have … specifically for the Korean market. This style is currently one of our most popular categories.” The Italian label currently has 24 directly operated stores in the country.

Canadian outerwear brand Nobis opened shop in Korea six years ago and today, it has 33 direct retail stores across the country. “We launch two to six new styles, exclusive to the Korean market each season,” says Nobis co-founder Robin Yates, who formerly served as vice president of Canada Goose. Today, it counts Korea as among its top five performing markets.

According to a spokesperson at MatchesFashion.com, Moncler, Canada Goose, Herno, Burberry and Prada are among the luxury retailer’s best performing puffer brands and the style is among its top five categories in Korea. Brands such as The North Face, K2, Descente, D-Antidote, Youser, This is Never That and Ienki Ienki have also been popular with Korean shoppers.

Launched in 2016 by Kiev-based Dmitriy Ievenko, who also co-founded Asthik Group, one of Ukraine’s fastest growing luxury retail companies, Ienki Ienki’s down jackets begin at around $700 and go up to $1,500. Yet, the high price tag hasn’t dented demand. “In our store, Ienki Ienki sold out straight away in its first season,” says Rare Market’s Kim.

Today, the Ukrainian outerwear label is stocked in 315 stores across 30 countries — in Seoul, it can be found in 10 Corso Como, Rare Market, Breaker, Boon the Shop, Cherbebe and Space Mue. “Each season, our orders in Korea rise about 20 percent,” founder Ievenko adds.

The puffer is also Korean menswear label D-Antidote's bestseller for the Autumn/Winter season. "For Autumn/Winter 2018, we presented four to five puffer styles and 3,000 pieces were ordered from international retailers," says D-Antidote designer Park Hwan-sung. The brand launched in 2014 and today has over 35 stockists worldwide.

Many Koreans are willing to spend on a brand name because of its perceived value, says art director Gary Bradnick, who has spent a lot of time in the country. “A middle class demographic has been forming over a few years ... in this instance, the price tag becomes more important, as it becomes less about how cheap did you get it for, but more how much you paid to own an authentic item, which of course is a statement of one’s wealth."

“It’s interesting because Koreans buy puffer jackets to fit in, but also to stand out and differentiate [themselves],” says Kim.