Will a Wave of Megastores Turn Bond Street into the World’s Premier Luxury Showcase?

Following the arrival of Louis Vuitton’s super-sized “Maison” on London’s Bond Street in 2010, the thoroughfare will soon be home to a slew of high fashion megastores, transforming the once-quaint street into a larger-than-life global luxury showcase.

LONDON, United Kingdom — By the Spring of 2014, a visitor to London’s Bond Street couldn’t be faulted for thinking she had been transported to the middle of a larger-than-life luxury wonderland. She will see the glittering wares of Louis Vuitton, Chanel, Dior, Fendi, Ermenegildo Zegna and Belstaff displayed in the windows of imposing, multi-storey stone-and-glass boxes conceived on a scale that is not only unprecedented for this part of London, but sets a new standard for luxury retail in the West.

With the exception of the Louis Vuitton flagship, none of these stores exists yet. But in a wave of openings, these gleaming megastores, which cost tens of millions of dollars each, are set to land in Bond Street over the course of the coming year.

Bond Street has always been synonymous with luxury. But as the definition of luxury has changed, so has Bond Street. A fashionable shopping street since the 18th century, Bond Street was once known for its antique shops, clustered around the London office of Sotheby's, the international auction house. Over time, art dealerships were joined by fashion boutiques built by brands like Armani, Cartier and Salvatore Ferragamo, transforming a few tradition-steeped blocks of Mayfair into one of the world’s epicentres of luxury retail. But these stores were relatively modest in scale. And, remarkably, until not too long ago, Bond Street was actually closed for business on Saturday afternoons.

The recent boom in megastores was set off in May of 2010, with the arrival of Louis Vuitton’s super-sized, Peter Marino-designed “Maison” at the junction of Clifford and Bond Streets: a gilded emporium teeming with blue-chip contemporary art, a private VIP apartment, a concept bookstore and the constant sound of clinking champagne flutes.

At the time, the brand’s creative director, Marc Jacobs, pronounced "It's probably one of the most magnificent retail stores in the world for the best luxury house, the greatest luxury brand," encapsulating the new store’s unabashed ambition.

Occupying over 16,000 square feet and featuring sculptures by artist Takashi Murakami, walls lined with silk wallpaper and a dramatic glass staircase, Louis Vuitton’s super-scaled vision of luxury raised the bar for other brands, setting off a veritable arms race for similarly-scaled stores on the street. 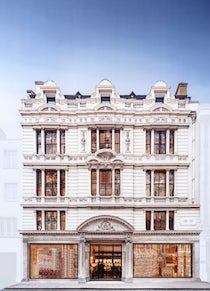 In June of this year, Belstaff, the British brand best known for its motorcycle jackets, is set to open its first global flagship at 135-137 New Bond Street. Grandly laid out over a meticulously restored 25,000-square-foot trophy building, Belstaff House, named and designed to evoke an aristocratic English home, aims to announce the brand’s arrival as a major luxury player, part of an ambitious repositioning scheme developed by Labelux, the company’s owner since 2011.

Later this year, Chanel is scheduled to open its own three-storey, 20,000 square-foot flagship at 160 New Bond Street, housing all of the brand’s collections, as well as the company’s UK headquarters. And even though the brand is being secretive about its plans, Dior, Chanel’s next-door neighbour, will soon double the size of its existing, relatively small, store at 158 New Bond Street. Not to be outdone, Fendi, too, is set to open shop at 141-142 New Bond Street this November.

But that’s just 2013. Next year, Ermenegildo Zegna will open its own expanded presence in London’s Bond Street, after winning the city’s permission to demolish its old store and add about 60 percent more shopping space. The brand plans to devote an entire floor to the label’s couture operation, now designed by Stefano Pilati, and will also use the space to display art from the company’s collection.

Interestingly, like the Louis Vuitton store, the forthcoming Chanel, Dior and Zegna stores have all been designed by Peter Marino, making the architect something of a creative mastermind behind Bond Street’s super-sized reinvention.

But why the sudden wave of expansion on Bond Street?

Unlike nearby Mount Street, which houses smaller scale luxury brands like Lanvin and Balenciaga, Bond Street has become the strategic focal point for global luxury brands targeting legions of wealthy foreigners that travel to London each year. In fact, London attracts more than 15 million foreign visitors a year -- 70 percent of whom shop during their trip, mostly for clothing -- making the British capital second only to Paris in terms of global tourist flows. Many of the highest spenders come from the Gulf States, Nigeria and Russia, as well as China and Brazil where import duties on luxury goods are high, making shopping in a London a cost-effective option.

Indeed, Bond Street is now at the centre of a number of powerful crosscurrents that have transformed the once-quaint street into a thoroughfare of international significance. As such, the new luxury megastores going up on the street are much more than outsized local flagships; they are beacons intended to project their brand’s international clout and ambition to a global audience. Perhaps more that anything, this explains their unprecedented scale.

Zegna’s CEO Gildo Zegna acknowledged as much, telling BoF: “Our target customers are local and European travellers, as well as tourists coming from Arab countries and Asia. Tourists are always important for all our stores and they will be even more so for our London store given that London is one of the most international cities in the world. London is the only European city with sales trends similar to those of the major Asian cities, so our objective was to create a massive retail destination in Bond Street -- a global store.”

Belstaff CEO Harry Slatkin also hinted at the importance of affluent visitors when he told BoF that "Bond Street has become the jewel of luxury shopping around the world -- the street alone is now a destination."

Bond Street is divided into several segments, some of which are considered more prestigious than others, an image gap that’s reflected in rents. According to Peter Mace, head of central London retail at real estate firm Cushman & Wakefield, the cheapest rents on Bond Street are for stores between Oxford Street, the U.K.’s busiest shopping strip, and Brook Street, to the south. While rents on this stretch of the street are about £300 per square foot per year, they double just on the other side of Brook Street. From there on southwards, the sky seems to be the limit, with tenants often paying rents exceeding £1000 per square foot per year.

Stratospheric rents, however, didn’t deter Slatkin, who set his eyes on Bond Street the moment he took over the British heritage brand: "As soon as we inked the deal to buy Belstaff, I knew Bond Street was fitting for the brand.” Slatkin’s wish came true, but not without paying a record price. Last year, Belstaff paid £3 million for a 20-year lease on the building that will house its global showcase, the highest rent ever paid on Bond Street for a new open market letting.

At £840 per square foot per year, Belstaff is paying above-market rates for its prized location. The ‘platinum stretch’ of Bond Street actually starts further south, between Clifford and Bruton streets, which is set to house a spectacular concentration of luxury mega-wattage, with Louis Vuitton, Chanel and Dior superstores a stone's throw away from each other.

While rents on Bond Street remain less than in Causeway Bay in Hong Kong, the world’s most expensive retail zone at $2,630 per square foot (about £1750, at current exchange rates), and on New York’s Fifth Avenue, at $2,500 per square foot (around £1650), according to Cushman & Wakefield, it’s clear that a number of major luxury brands are betting on Bond Street becoming one of the world’s premier luxury shopping destinations. But based on current footfall to the area, none of the forthcoming stores are likely to be profitable from the start. By contrast, Louis Vuitton’s gargantuan, museum-like retail spaces in Paris, New York and Hong Kong are located in high-traffic areas.

A major public transport project could tip the balance for Bond Street, however. Crossrail — a new high-capacity, high frequency train service that will traverse London — is set to open a major transport hub at the top end of Bond Street in 2018. According to transport officials, the new rail line will increase the number of passengers visiting Bond Street by as much as 70,000 to 255,000 people per day, further cementing the street’s position as a global retail destination.

Still, it remains to be seen if Bond Street’s transformation will, indeed, bring with it the kind of traffic flows that would justify the huge expenses associated with building and maintaining the soon-to-open megastores. But perhaps the street does have the potential to become a must-go destination on every tourist’s agenda, much like Madame Tussauds or the London Eye.

Only then can Bond Street join the ranks of Manhattan’s Fifth Avenue or the Champs-Elysées as a super-scale showcase that can generate super-scale revenues.