The outgoing programme director of fashion at Central Saint Martins — the top school in BoF’s global fashion school rankings — reflects on her student days, the impact of Galliano and McQueen and the challenges facing fashion education.

The outgoing programme director of fashion at Central Saint Martins — the top school in BoF’s global fashion school rankings — reflects on her student days, the impact of Galliano and McQueen and the challenges facing fashion education.

LONDON, United Kingdom — “If you look up to our studios at 10pm, every night our lights are blazing. What is it about fashion students that they’re so dedicated and hard working, so ambitious?” asks Willie Walters, the outgoing programme director of fashion at London’s Central Saint Martins, which came top of BoF’s global fashion school rankings for the second year running.

Walters is, in fact, well-placed to answer her own question, having studied fashion design at Saint Martins during London’s “Swinging Sixties,” before the school became world famous as the alma mater of Alexander McQueen, John Galliano and Phoebe Philo.

Walters joined womenswear in 1992, before becoming course director of BA Fashion in 1998. In 2010 she was promoted to programme director of fashion, overseeing a “nucleus” of eight permanent tutors and all managerial and educational matters relating to undergraduate courses in fashion.

“I am juggling every day. Some of the balls are on fire and some are made of precious crystal. Room changes, students in need, staff problems. You have got to keep all those balls up and that is tiring. You wear a smile on your face, you probably have to wear a good dress and not let the balls crash to earth. It’s full of adrenaline, but it’s tiring as well,” explains Walters, who, thanks to her auburn bob, darkened lips and black dress, could have been sent straight from central casting.

“I think having run my own business” — Swanky Modes, an avant-garde fashion label based in Camden, which operated from 1972 to 1991 and was shot by Helmut Newton — “helped with that. There was always some problem and when you’re young, new and weak, people know that and they just push. Yes, a lot of the memories are of those tough times, but then equally mixed in to my recollection are the memories of seeing students suddenly succeed. Remembering Sean O’Hara in his bath, Richard Malone turning out an extraordinary piece for his very first project, just seeing students working together in the corner.”

It was only in the early 1990s that Paris fashion houses started taking on people like Alexander McQueen and John Galliano, and then the whole focus swivelled to London. You can’t imagine how weird it felt.

During her 24-year career at Central Saint Martins, Walters has seen the school evolve into a leading global institution, with one of the most powerful brands in fashion education. “It was only in the early 1990s that Paris fashion houses started taking on people like Alexander McQueen and John Galliano, and then the whole focus swivelled to London. You can’t imagine how weird it felt. It was a very exciting time for fashion in college anyway — you had people like Hussein Chalayan burying fabric and people using metal and unusual materials,” says Walters.

“The sudden recognition of people not from France, that hadn’t studied in a more parochial way, introduced the British way of education, which is so linked to graphic design, fine arts, etc. They were laying the golden eggs. They were producing the really inventive fashion that suddenly was important,” she continues. “Stella McCartney, Phoebe Philo, Riccardo Tisci — all these people who had really only been out of college for quite a short time were suddenly grabbed and they were doing the job! They still are. That focused a lot of attention on us,” she explains. 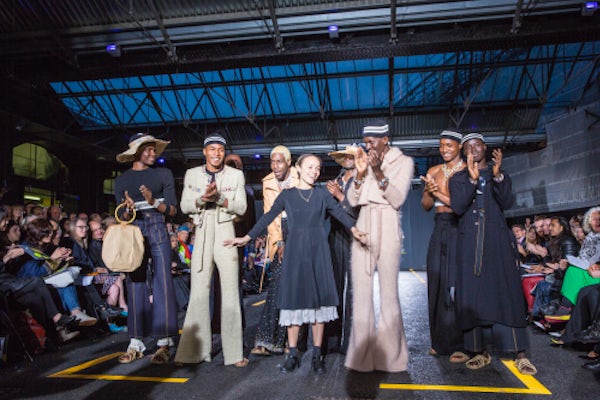 British schools — certainly Saint Martins — are known for their focus on conceptual research and the unbridled creativity of their graduate collections. “Some people say, ‘You could only do that at Saint Martins,’ and that that’s the school style — that liberty. But we’re quite severe. Students have to pass each project. The amount of failures in the first year is enormous; almost everybody is [retaking] a project. If they don’t [pass their retake], they either have to do another year again or they move on to something else. Liberty is key to our education, but the rigour we expect from our students’ process is paramount.”

“Strife and exultation,” is Walters’ way of describing the creative process she seeks to elicit from her students. Each project requires students to work from concept to completion, challenged by the tutors, their peers and themselves at each stage, from research to drawing, pattern cutting to final design. It is an intense process and one Walters is duly protective of.

“I had a French TV company asking me questions a couple of weeks ago. I was trying to explain students cannot simply do what they want. They have to rigorously follow the programme first. Students who come here and think, ‘Right, here I am, I can just design an egg,’ and they just keep doing wacky sort of designs, you have to say, ‘No, no, no, start from the bottom.’ If, in your final year, your egg is superlative, you’ll be allowed to have an egg on the catwalk. But never to just be wacky,” she continues.

Liberty is key to our education, but the rigour we expect from our students’ process is of paramount importance.

Walters is also wary of the rising trend towards multidisciplinary fashion education, which enables students to design curricula that cover a broad spectrum of creative and commercial skills, but little in depth.

“I hear things like ‘I have studied draping, I did a semester of draping.’ That concept of buying into little tranches and ‘tick!’ You’ve done that — I think that’s dangerous. Here, you do draping until you do it well — or you don’t do draping. I understand it’s quite tempting for people running educational establishments to say, ‘Oh, we’ll develop a new course, we’ll get lots of students, we’ll offer this and this and this,’ but it’s just dabbling your feet vaguely in everything. I believe you have to concentrate.”

Since 2012, Saint Martins has been housed behind a six-storey industrial façade in London’s King’s Cross. Inside the school building, cathedral-high ceilings, steel supports and exposed brick — the stuff of trendy corporate headquarters — house approximately 5,000 students, with 750 full-time fashion students. It is a far cry from the school Walters entered as a student in the 1960s. 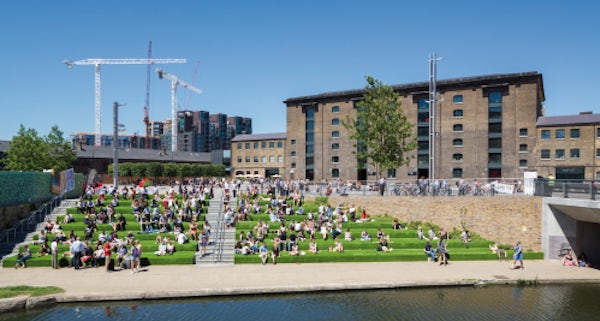 “The thought we would leave the old Central building filled me with horror. At the Charing Cross site, the walls were collapsing, you couldn’t open the windows because they were so painted over, or you couldn’t shut them so it was drafty; the roof was leaking… But those walls were imbued with years of intense inventiveness, with creative strife and exultation. It had so much passion and we did feel the decision had been made because of the location of our [old] buildings would be profitable [if sold]. But four years later, [the new campus] is getting softer. We just keep chipping away at the edifice,” she says.

The changes in the school’s campus mirror the developments in fashion education that have occurred during Walter’s tenure. The process of transition that Saint Martins underwent, from two little known but well-respected independent British art schools, the Central School of Art and Design and Saint Martin’s School of Art, which merged in 1989, to an international institution that attracts students from all over the world was not without its challenges.

“Back in the 1990s, management sent agents to foreign countries to recruit students, although the agents didn’t really know what we were looking for. There was the influx of overseas students. I remember the first Russian student, the first Chinese student, more and more people were coming and they were being welcomed, partly because the business of running an education was the financial input of the overseas students.”

“There were wobbles when we were sent people who we shouldn’t have been sent, who we didn’t choose, who we didn’t recruit. Because some of the recruited students weren’t not as good as the others who had been recruited through [British higher education portal] UCAS, it was difficult for teaching staff. But that was ironed out completely over the next 15 years,” she continues.

Today, as ever-increasing numbers of students aspire to enter the fashion industry, fashion education is big business. Because of the commercial potential from over subscribing courses, the priorities of the educators and the commercial managers of these institutions are at risk of diverging.

“I understand upping student numbers from a management point of view. But there were times in my career when I would be angry because we would be over recruited, but not provided with more space or resources for teaching to deal with that. In my job, I thought of myself as a fighter. I have to be quite strong and militant to make sure my students don't get overshadowed or exploited because, within education, there’s quite a lot of top down pressure in large institutions. I have great respect for a small course, and sometimes they have it a lot easier without that pressure,” she continues.

Walters also believes fashion’s rising popularity has supported arts colleges in recent years. “I often think that the fashion BA and MA courses are the mighty engine. During my 24 years, it has been capable of [financially] supporting other disciplines within this institution. There are some less popular ones that are harder to recruit to and have very expensive techniques.”

But as Walters prepares to leave Saint Martins, a more imminent threat has arisen. In addition to her existing worries over the cost of living in London and the increasing difficulty for all students, regardless of their background, to access fashion education, Walters is concerned about the impact of Brexit.

“I’m worried about us leaving the EU and it becoming some ‘Little Britain’ situation again. I would be miserable if when I leave everything was to plummet and fall apart and some Draconian upper top management cage was to come down on my course. That’s why I want to leave now, while the new people can learn to be as strong as me to prevent that happening in their own time. Because I wasn’t me when I started off, I had to learn so much,” says Walters. “I want to pass over while my team are kind of fresh and young and they can grow into being really good at the job. I’m not happy to be leaving, but I’m happy to be leaving something great.”