The Vogue photographer, known for his striking campaigns for Prada and Raf Simons, is set to showcase limited-edition “collectables” on the platform every month and release a new book with Idea.

ANTWERP, Belgium — Willy Vanderperre does not like to sit still. Famous for his work with brands like Calvin Klein, Jil Sander and Prada and the international editions of Vogue, W and i-D, the Belgian photographer seems to have caught the entrepreneurial bug for his latest project. If past projects are any indication — the multi-hyphenate creative has previously produced a film, fanzine and exhibition — he loves to dabble in different mediums. “It's always nice to explore other worlds [and not] limit yourself to what you do,” he told BoF.

Now, Vanderperre is launching the first of a series of “collectable items” — a limited-edition run of only 25 pieces, dropping on the 15th of each month — on his newly created Instagram page and website. The first item will be a €20 ($22) poster featuring an image of Gigi Hadid he had photographed for “The Empty House” in the March 2019 issue of Vogue Italia. “I shot that image and thought, wouldn’t it be great if it was a poster?” he mused. “It’s not one Gigi, but four Gigis — that’s going to be the tagline!” 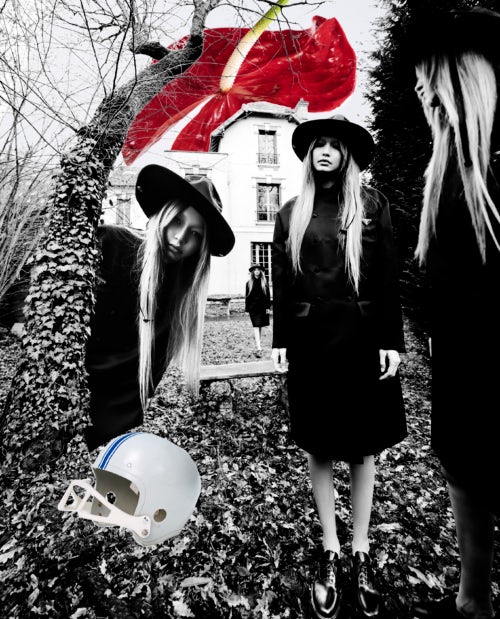 Vanderperre explained that he picked this particular editorial, which involved longtime collaborators like Olivier Rizzo and Anthony Turner, because it not only “feels very current” but it also marked a “new exploration” in technique for him, “with the cut-outs and that type of imagery,” he said. “There’s a quality about it that made me think, I would love to have it in my room. It could be a movie poster or the cover of an album. You could put it on your wall, next to a poster of a rock band, and they would live together in that world.”

The idea for the project came about as a response to the evolving nature of Instagram. “[It] has become a platform for selling stuff, rather than for sharing stuff,” said Vanderperre. “Before, it’s where you would share things with your friends. Now, every post is sponsored by or in collaboration with [a company]. It’s become an advertising platform.”

This spurred the photographer to reflect on his own behaviour. “I wanted to play on that and also take that [business approach] away from my personal page,” he continued. “My personal account will still exist, but it will become even more personal, which is what the platform is meant to be for.”

Each month, the image-maker will reveal a new collectable piece, such as T-shirts, stickers or a book that he will personalise. “I don’t like to call it ‘merchandise,’” he said. “Unlike merch, they are produced in small amounts, so it’s more like something you collect, rather than hundreds of something.” He added it was important that the items were “accessible for a younger generation [but] a collectable item can be expensive as well,” he continued. “That’s the charm of it sometimes, having to save up for something you want.”

Vanderperre is also gearing up to release his second book with Idea at the beginning of May. He had previously collaborated with the London-based publisher on projects such as “635,” a limited-edition book that recorded all of his Instagram posts in 2015 until the point of printing. “The core of this new book is an update on ‘635,’” said David Owen, who co-founded Idea with Angela Hill. “That title came from the number of posts on Willy’s Instagram at the time of publication. We only printed 350 copies and it sold out in a few days.”

Instagram has become a platform for selling, rather than for sharing.

According to Owen, the new tome will include an added component of works by other Instagram artists, who Vanderperre discovered had taken his original images and manipulated them, making them into their own.

Bypassing traditional retail, Idea’s main communication channel with its clients is also Instagram — which counts almost 370K followers — where they advertise coveted books, available to purchase on a first come, first served basis. It was one of several reasons that drew Vanderperre to them. “I’ve always embraced social media and technology,” he said. “You can react to it or choose not to be a part of it, but like fashion, it’s reflective of the times that we live in.”

As for Idea’s rationale for the deal, Owen explained that “Willy is one of just a few fashion photographers who has an active fan base. Whatever the subject of his photographs, the pictures project a world and a mood that people aspire and want to belong to. People are fans of Willy Vanderperre in the same way they might be fans of a band.”