LONDON, United Kingdom — “The Whispers people are profiting from us,” says Piper Chapman over lunch, referring to the morning she just spent sewing lacy pink knickers. “I’m okay with that,” shrugs one of her fellow inmates. “Me too,” adds another.

In the latest season of Orange is the New Black, 40 inmates at Lichfield prison are employed to sew underwear for Whispers, a fictional lingerie company that set up a manufacturing plant inside the prison. Off-screen, a surprising relationship exists between prisons and the fashion industry.

Across England and Wales there are 105 public sector prisons, containing 63 textiles workshops. In the US, the Federal Prison Industries (a government-owned enterprise, commonly known by its trade name Unicor) operates 78 factories inside correctional facilities, which make products for the prisons’ own use, such as uniforms or bedding, and also work on federal contracts for products like military uniforms. In 2014, Unicor’s revenues were $389.1 million, of which clothing and textiles sales made up $69.4 million.

These programmes have been in place since the 1930s, but in the last decade, clothing brands like Peruvian label Pietà, US company Prison Blues, and Stripes Clothing in the Netherlands have added a new layer to the relationship between fashion and prisons. These enterprises sell fashion products made by inmates — which begs the question: is making clothing inside prisons a viable business model?

To many, prison work connotes “cheap labour.” In the US, some — but not all states — require able-bodied federal inmates to work; in England and Wales, many are offered vocational programmes. Under both systems, inmates’ food, healthcare and accommodation is paid-for. In 2013, Unicor’s inmate pay rates ranged between 23 cents and $1.15 per hour. In England and Wales, the average is about £9.50 (about $14.49) a week.

But in spite of the cheap workforce — as well as potential savings on transportation costs by manufacturing locally — the economic argument for working with prisons is weak. In 2014, Unicor, which reinvests its income into the prison system, ran at a net loss of $37.5 million.

Haeftling, which ran from 2003 to 2013, was a Berlin-based fashion label that used prison industries to make its collections. Prisoners were paid in line with standard prison wages. According to founder Stephan Bohle, who sold Haeftling to a German streetwear company in 2006, the company’s revenues hit seven figures.

But, “we had a lot of problems ordering the materials, producing in a decent quality on a regular basis,” says Bohle. Consumer demand was strong — at one point the label took down its online store because the prison workshop couldn’t keep up — but Haeftling struggled to vary its product offering, because of the limits on inmates’ training.

Customers were also confused by the price, especially in light of prisoners’ low wages. According to Bohle, the prison overheads were very high. Overall, he says, the business broke even.

Tegel Penitentiary, Germany’s largest prison with about 1,700 inmates, also attempted to launch an online store for its tailoring workshop a decade ago, but had to close the enterprise due to a lack of staff.

Some organisations have found business benefits to working with inmates, however. In 2012, Pietà founder Thomas Jacob visited a jail in Lima, Peru. “I met a lot of wonderful people; warm, open minded and very far from the image you may have of prison inmates,” he recalls. “They wanted to get by, to learn a skill, to work, to earn money, but they didn't have any opportunities.” 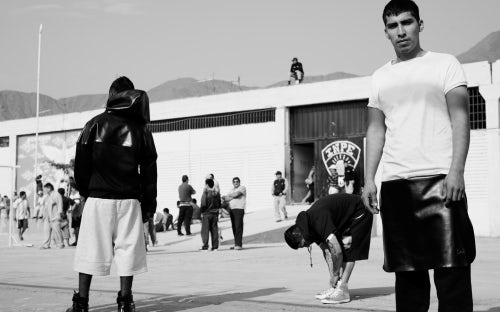 The prison already had sewing and knitting machines for its internal manufacturing, so Jacob drew up some designs for some basic items like sweaters, and Project Pietà was born. Today, Pietà employs around 30 inmates in three prisons in and around Lima, who cut, sew, embroider and screen-print streetwear-inspired collections including bomber jackets and leather-collared polo shirts, using local materials like organic pima cotton and alpaca. According to Jacob, Project Pietà, which shares the costs of machinery and maintenance with the prisons, is profitable, although he declined to disclose financials.

“There’s a real business opportunity here,” says Jason Swettenham, head of public sector prison industries in England and Wales. The textiles workshops, he says, have the capacity to engage up to 2,000 inmates in vocational projects. “The thing that is frustrating for us is that it’s very, very difficult in a custodial environment to almost ‘advertise your wares.’”

In September 2014, London College of Fashion partnered with the UK Ministry of Justice to launch a garment manufacturing unit inside HMP Holloway, a women’s prison in London. The unit, which trains up to 20 inmates at a time to operate machinery used in fashion manufacturing, aims to give inmates the skills to find jobs in manufacturing units or be able to set up at-home clothing alterations businesses when they are released.

The business benefit here is not profit — but Corporate Social Responsibility (CSR). The LCF unit at Holloway has worked on commercial contracts with small-scale fashion labels like The Ragged Priest. The unit itself runs at a loss, despite receiving funding from LCF and the Sir John Cass's Foundation. According to Professor Frances Corner OBE, head of London College of Fashion, companies engage with the unit as a social enterprise (some include it in their CSR reports), but not as a private company that can compete with the industry on production speed and cost.

Indeed, a big question for any company working with prisons is perception: what will the customer think? In Orange Is the New Black, the characters debate whether Whispers, by employing prisoners for work, is guilty of “exploitation.”

“It’s a very difficult story to tell,” says Stephan Bohle of Haeftling, who says some customers also criticised the brand for supporting criminals. Christian Birky, the co-founder of Lazlo, a menswear start-up that employs ex-inmates, is sceptical of companies’ motivations: “For the most part, when you see companies working with people, having them make products in prison is basically an exploitation of a workforce,” he says. “There’s so much investment that needs to be done to prepare guys and women that are in prison to have skills when they get out. That’s very different to saying, ‘Why don’t you make that in prison — you could pay 20 cents an hour.’”

In the UK, wages are decided by each prison and vary based on the nature of the job. In Peru, prisoners have to pay for amenities like healthcare, and many also have to pay a civil reparation but don’t have savings or family on the outside who can help. At Pietà, inmates are paid for their work, per garment, though Jacob declined to specify the wage. Also, for every four days of work an inmate does with Pietà, one day is deducted from his or her sentence.

In recent years, prison labour has become part of the conversation around domestic manufacturing in the fashion industry. Over the last two decades, as fashion companies outsourced factories to hotspots of cheap labour in the developing world, the UK and US clothing manufacturing industries have been brought to their knees. Currently, the 150 fashion manufacturers based in and around London face a shortfall of about 150 machinists each year.

LCF’s partnership was set up with two aims: one, to help female offenders turn their backs on a life of crime. Two, to fill a skills gap in UK fashion manufacturing. The eventual aim of LCF’s project is to set up a commercial manufacturing unit in London that would employ inmates on release.

“Everybody talks about wanting to get manufacturing here in the UK, and everybody knows we need a skilled workforce,” says Corner. “There’s a huge opportunity to develop very skilled machinists.”

In fact, some fashion companies have worked with prisons to tackle this issue. Orange Is The New Black’s plot was based upon real events — in the '90s, Third Generation, a garment manufacturing subcontractor, contracted work to prisons in South Carolina to sew lingerie and leisurewear for Victoria's Secret and J. C. Penney.

The aim of the project — which, according to a report by the National Institute of Justice produced approximately $1.5 million worth of clothing in 1994 — was to rehabilitate prisoners and reskill the local labour force. “We could not find enough qualified industrial sewers in rural South Carolina,” said Third Generation president Merv Epstein at the time.

However, some in US fashion industry have voiced concerns that prisons industries hinder local businesses, after companies including American Apparel Inc., a military uniform manufacturer in Alabama, lost contracts to Unicor. “We support efforts to ensure rehabilitation of inmates, including efforts that involve education and on-the-job training, but these efforts should not displace the jobs of private sector employees whose taxes pay for prison operations,” says Steve Lamar, executive vice president of the American Apparel & Footwear Association, who added that Unicor gets “first dibs” on federal contracts.

“We’ve got a strict code of practise,” says Swettenham. The prison enterprises in England and Wales partner with companies looking to onshore manufacturing from abroad, “But if it means that it will turn off a job with a manufacturing outfit in the UK to come and work with us, then we won’t even begin to engage with them,” he says.

For LCF and Pietà, the endgame is rehabilitation. Since its launch last September, two inmates from the LCF-Holloway unit have gone on to get placements with manufacturing outfits after being released on temporary license. At Pietà, two former inmates from Santa Monica jail now work for the business on the outside, preparing orders and buying materials.

But for those behind bars, vocational projects can help build up a sense of self-worth, and simply help inmates “to think others things in their head, to escape,” says Jacob.

“Don’t think that because people are in prison that they’re forgotten and that they’re useless to society,” agrees Swettenham. “Because most of them have just done wrong and want to make amends and want a chance.”