BROOKLYN, United States — On Saturday afternoon in the Bushwick area of Brooklyn, a long line of unbothered and unconventional young people snaked around a giant industrial block, patiently waiting to be let into Eckhaus Latta’s latest runway show. The impressive turnout and impossibly cool casting — including Kim Gordon’s daughter Coco Gordon Moore in her runway debut with her mother watching on — are nothing new for the delicately wonky label launched by Mike Eckhaus and Zoe Latta in 2011. But the casting of the artist Maia Ruth Lee, who is eight months pregnant, was a reminder of how easily runway show conventions can be subverted.

Fast forward nine hours and the same industrial block of Bushwick was lined with metal fencing for Alexander Wang’s guerrilla-style street runway, around which the thronging audience struggled to catch a glimpse of the second running of the show that night (the first took over a block in Soho) before a giant after party, dubbed #WANGFEST, kicked off in a warehouse across the street. The clothes were forgettable; the party was a branded music festival that managed to garner a Page Six mention.

The juxtaposition of two wildly different shows from two labels that have built their brands on being “cool” contains a critical lesson for New York Fashion Week. Overwrought productions can’t make up for lackluster product. But with many of the city’s most beloved young designers, including Proenza Schouler and Joseph Altuzarra, having shifted their shows to Paris, there is more oxygen for those who remain, like Maryam Nassir Zadeh, who staged a show on the East River Track with a live performance from Solange.

Of course, the newest names — like Beckett Fogg and Piotrek Panszczyk of Area, who took to a roof of a Lower East Side high school for their show — stand to benefit the most. “In a way, with the bigger names having decamped to Paris, the spotlight can shine brighter on that younger generation,” said Susanna Lau, the writer of Style Bubble, noting labels like Vaquera, LRS and Area. “The schedule for sure does feel more empty, but I think there are also brands that are filling up the energy vacuum,” she added. Although Eric Wilson, fashion news director at InStyle, said Matthew Adams Dolan was the only new label he made an effort to see this season. “What I've had to do is just be more and more ruthless about what I’m able to go to,” he said. 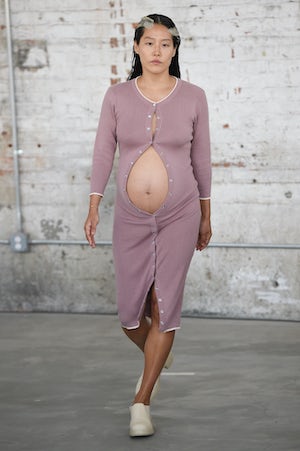 But back to Eckhaus Latta. “The shows are still testing grounds,” said Latta, adding that it “used to break their hearts” when they didn’t show every single piece from a collection on the runway. Now that they’ve added pre-seasons, it’s easier to tolerate not putting everything on the runway. Spring 2018 is their biggest collection yet, and to keep up with the sales growth they've seen in the last year, the designers have hired staff to work on sales, production and book-keeping for the first time. “A year ago, if someone had said, ‘What your retail strategy?’ — we would have laughed about it,” said Latta. “But now we try things and there are very little consequences. We are not producing 3,000 of something and hoping it sells.”

The brand has seen attendance at its shows increase by “leaps and bounds" from about 250 last season to about 600 this season, said Amanda Carter, founder of boutique public relations firm Mode, which represents the label along with many of the calendar’s most-discussed emerging designers, including R13, Maryam Nassir Zadeh and Maki Oh. “It could be due to fewer larger designers showing, but it’s like building a house — if you have talent, people will show up, no matter what, as long as you make the timing right.” (Eckhaus Latta's Bushwick venue also had a higher audience capacity.)

“I’ve always believed in slow and steady wins the race,” said R13’s Chris Leba, a former Ralph Lauren designer who launched the denim turned ready-to-wear line eight years ago and is far from new to the business. But he is relatively new to fashion week, having only revealed his identity to the press after R13’s runway debut in 2016. His distinctly mischievous take on Americana has turned R13 into an under-the-radar must-see, and his Spring 2018 show on Thursday delivered a mashup of nostalgic American patterns that cleverly played with “fly over state” sartorial tropes, like trucker hats. 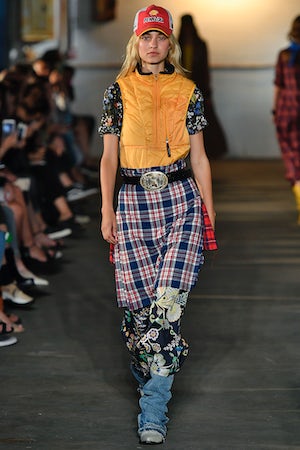 “It’s been a very methodical, slow process and being patient and not compromising ourselves for wanting to be a huge success or making a lot of money,” said Leba. “The more distinctive something is, the less of an audience something has.” He is adamant that buyers pick up the right depth and breadth of R13 pieces. He sees his runway shows as an incentive to push himself and his team to their best performance. “Every day there is someone new, someone cool coming into the market. We have to stay on top of our game to compete…If you’re strong, there’s a market for you too.”

If the audience at Mansur Gavriel’s first runway show — which included the brand’s new president Shira Sue Carmi and chief executive of LVMH Fashion Group Pierre-Yves Roussel — is any indication, there was robust interest in Rachel Mansur and Floriana Gavriel’s first ready-to-wear runway show. The collection consisted of mostly outerwear and sweaters in solid soft pinks and blues and bright reds and yellows, along with the standard neutral tones. Except nothing about the brand’s pieces are standard: Gavriel said the biggest challenge was finding the exact right camel wool, pure wool and cashmere materials. “We love the feeling of being in a cozy coat that wraps you and looks beautiful,” she said. Easier said than done, but the show was a warm embrace of its own.

The collection went on sale on Mansur Gavriel’s site right after the show on Sunday to be followed by select retail partners including Net-a-Porter and Bergdorf Goodman later this week and a collection launch event on Monday night at the brand’s Soho boutique. “Retail is very important to us as a brand because we are so concept driven,” said Mansur. “We like the idea of the brand having a concept that is driven by shape and material and color, and we feel that easily extends to other products.” The brand that once struggled to manage rapid sales growth driven by interest in its signature bucket bag has officially begun a new chapter in its story.

Speaking of managing growth, the Toronto-based Chloé and Parris Gordon’s Beaufille, who jumped onto the scene in 2016 when their make-or-break-it Autumn presentation in New York — “our last $10,000,” said Chloé — saw their business increase by 300 percent in that first season on the fashion week calendar. “We want to get to the next level, we want to be doing runway shows, we want to be a permanent thing — but it’s just managing the right calculated steps,” said Paris. At their Spring 2018 presentation on Friday, the colors were brighter, the sleeves were bigger and the waists were cinch-ier. “[Our label] does balance something a bit more directional and fashion forward, but really wearable,” she added. “We need the wholesale to be sustainable and profit to be able to [take more risks.]” 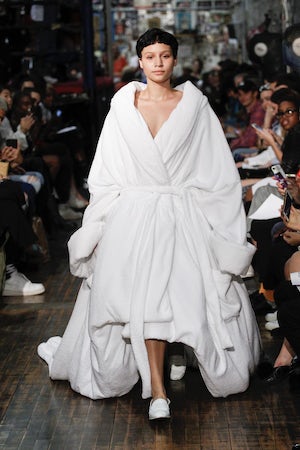 Risks are the name of the game at Vaquera, the label designed by a collective of four designers known for its absurdist designs that tackle big themes like commercialism. Their show on Tuesday afternoon was literally underground at the Church Street Boxing Gym in the financial district. The collection grappled with fame, including the designers’ take the infamous American Express gold card-covered dress that costume designer Lizzy Gardiner wore to the Academy Awards in 1995. Each guest had a Vaquera credit card waiting on their seat too.

Vaquera designer Patric DiCaprio said the foursome had been deconstructing fame when they decided to reinterpret the dress. David Moses added that they are having an identity crisis about where they stand in the industry. “It has a lot to do with money,” he said. As current members of the CFDA/Vogue Fashion Fund design competition, the young label is thinking about its commercial potential more than ever before; but the most wearable pieces in the show lacked the same joyful irony as, say, the giant fluffy white bathrobe that closed the proceedings: a take on the couture bride for the self-care generation.

Their show notes encapsulated the identity anxiety the designers must be feeling as they try to turn their reputation for witty commentary through fashion into a label that commercially sustainable. “I’m unsure as to what business looks like,” read the show notes, which were rendered in poetic form. “I’m supposed to be authentic, but it’s not clear what that means!!!!!!!!”

Perhaps they don’t know what authenticity means, but they seem to have figured out what it looks like. The challenge will be holding on to it as they grow.